Board, Council Meet In Boston 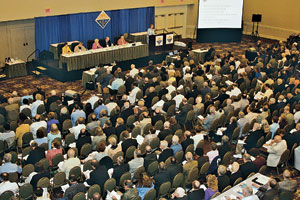 At their meetings last month in Boston, the ACS Board and Council heard reports from committee chairs and officers, dealt with the business of the society, and helped set its direction for the future.

A check of the society's finances is always an important part of board and council meetings, because ACS relies heavily on revenue generated from sales of its publications and information services to fund its education, membership, communications, and government relations programs, among others. The Society Committee on Budget & Finance (B&F) reported that, based on revenue of approximately $445 million, ACS is projected to end 2007 with a net contribution from operations of $7.5 million, which is $139,000 more than had been budgeted.

"There are two main reasons we are restarting a State Government Affairs program," says OLGA head Glenn S. Ruskin. "First, K-12 education is an area where states have primacy, and second, K-12 science education is one of the society's main public priority areas."

Makeup of elected council committees for 2008

He also sees this new program as an excellent response to the new America Creating Opportunities To Meaningfully Promote Excellence in Technology, Education & Science Act (America Competes Act), signed into law on Aug. 9 by President George W. Bush. ACS has played a lead advocacy role on the federal level to promote this bill, which authorizes $43.3 billion over a period of three years to foster U.S. research and science, technology, engineering, and mathematics education.

As is usual at fall meetings, the council selected members for the Committee on Committees, the Committee on Nominations & Elections, and the Council Policy Committee. The results are summarized in the table on this page. It also approved a noncontroversial petition to harmonize the way divisions and local sections can form affiliations with other organizations (C&EN, Aug. 6, page 38).

The Committee on Meetings & Expositions (M&E) reported that the Boston meeting attracted 15,344 registrants. Totals in select categories are as follows: regular attendees, 8,792; students, 3,518; guests, 574; exhibit-only, 784; and exhibitors, 1,676. The committee also announced that it will cost more to attend ACS national meetings next year. M&E approved an increase of $10 for the 2008 national meetings advance registration fee.

M&E Chair Willem R. Leenstra told councilors that the 2011 national meeting, which had been planned for Chicago, would be moved to Denver. The committee made this decision on the basis of responses to a survey of 3,000 randomly selected attendees of the last national meeting in Chicago. This action irritated some councilors from the Chicago Section, who opposed this change and expressed concerns about the way the survey had been conducted.

The M&E chair explained that the committee had received many complaints about the difficult logistics of the Chicago meeting-particularly the difficulty attendees had getting to and from McCormick Place in a timely fashion.

In addition, the 2012 meeting scheduled for New York City will need to be relocated because of construction delays at the convention center. M&E voted to move this meeting to Philadelphia and to change the dates from Sept. 9-13 to Aug. 19-23, 2012.

M&E also agreed on a policy regarding paper withdrawals from the national meetings. Starting immediately, all papers officially withdrawn from the meeting will be eliminated from the Chemical Abstracts Service database.

In other actions, as part of a regular review, the council voted to continue the Committee on Nomenclature, Terminology & Symbols. It voted to support the request of the Committee on Chemists with Disabilities that its status be changed from an "other committee" of the board to a joint board-council committee, and it voted to amend the meaning of the Committee on Project SEED acronym and update the committee's charge. The acronym name will be changed from "Summer Educational Experience for the Disadvantaged" to "Summer Experiences for the Economically Disadvantaged."