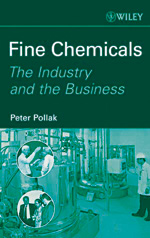 There is a little game that the close international coterie of journalists covering the fine chemicals industry plays whenever we all get together at a trade show. We go to the nearest bar or pub, sit around a table, and one by one give our definition of a fine chemical along with an explanation of how fine chemicals differ from specialty chemicals. The scribe with the most airtight definition, as determined by the group, wins some small prize.

The game tends to heat up because of the blurry lines between specialty chemicals, biologics, drugs, and fine chemicals. For this reporter, fine chemicals can be defined as high-value chemicals purchased for their molecular qualities rather than for their functional performance, usually to make drugs. My colleagues have other definitions, to be sure.

Well, our little game may be over with the recent publication of "Fine Chemicals: The Industry and the Business," by Peter Pollak, a truly authoritative voice on the subject. Pollak, an industry consultant who worked for 30 years at the Swiss firm Lonza, some of that time at the helm of its fine chemicals division, has written a book that is both the text for Fine Chemicals 101 and a desktop reference for anyone trying to keep track of the molecules, the markets, and the players.

The book will be of particular interest to chemists in industry as it delves into the history of fine chemicals, which Pollak dates back to the late 1970s when the ulcer medications Tagamet (cimetidine) and Zantac (ranitidine) created an unprecedented demand for advanced chemical intermediates. The companies that made the drugs???Smith Kline & French and Glaxo (now GlaxoSmithKline)???had to outsource their fine chemicals manufacturing to European and Japanese chemical producers. Later, a nascent generic drug industry turned to outsourced supplies of fine chemicals, as did most major drug companies in the U.S. and Europe as they entered the blockbuster era of the 1980s and 1990s.

The mounting demand by the pharmaceutical industry created a thriving, largely Europe-based, contract fine chemicals manufacturing services sector. Pollak estimates that contract manufacturing, which he charmingly dubs the Konigsdisziplin—king discipline, or main activity—of the fine chemicals industry, has grown to make up nearly half of the $75 billion global fine chemicals market. Drug companies themselves account for the majority of the rest of the market. 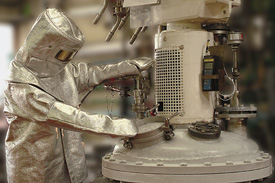 Pollak gives a comprehensive rundown of the chemistry of fine chemicals, complete with molecular diagrams and engineering schematics. These are features no doubt indispensable to chemists with an eye on the field. He keeps it lively by framing the science within the context of an industrial drama, the lore of which he clearly delights in.

The industry has grown, according to Pollak, through three boom phases associated with new drugs entering the market. After Tagamet and Zantac, it surged again in the 1990s with the introduction of high-dosage AIDs drugs and COX-2 inhibitors. A third, mini-boom is now under way, prompted by the stockpiling of the antiviral Tamiflu by Roche, which opted to set up a network of 15 fine chemicals contractors around the world, each working on particular steps of the complex manufacturing process for the drug.

Boom two was the most dramatic, accompanied by what Pollak refers to as "irrational exuberance" over fine chemicals on the part of the established specialty chemical sector.

Large diversified companies such as Great Lakes Chemical, Clariant, Rhodia, and Solutia, hoping for an antidote to sluggish sales in specialties, rushed into the sector, creating a glut of capacity just as the fortunes of the drug industry plummeted from fabulous to merely spectacular. With the end of the blockbuster drug era, the contract fine chemicals industry went into what Pollak calls a recession in 2000. Several diversified companies divested businesses they had paid high earnings multiples to acquire and exited the field.

Pollak deftly weaves this fine chemicals gold rush and ensuing hard times into the historical arc of the industry's relationship with its unique customer base???big drug companies. Today, Pollak sees the future of the sector hinging on two developmental drivers???the destiny of the pharmaceutical industry on one hand and the globalization of the fine chemicals industry on the other. Pollak says the outcome on the first front will be determined largely by drug companies' review of their business models for R&D and manufacturing.

The real uncertainty, however, is on the global front. China and India have been a threat in the wings for a decade, and Indian producers are now taking center stage in fine chemicals manufacturing, some by purchasing Western assets. Pollak sees the global fallout pivoting on the success that Asian firms experience in developing long-term relationships with Western customers in a market where reliability and quality ultimately take precedence over low cost.

Reading Pollak's book, one gets the feeling that the fine chemicals industry, following its dark night of the past five years, is, like its customers in the drug sector, putting its head down and getting to work. It faces many of the same threats, such as globalization and cost pressure, as other high-tech industries.

Pollak also makes an interesting observation on a metamorphosis in the industry as it moves out of the trough it has been in since 2000. He notes a heavy shift in participation from diversified chemical companies to small, privately owned firms that focus entirely on fine chemicals, much like the companies that pioneered the industry in the 1970s.

"Fine Chemicals" presents a comprehensive industry overview loaded with just the right amount of easy-to-comprehend graphics and comprehensive tables and charts on mergers and acquisitions and other topics. It will be as useful to the chemistry student as it is to the top managers of the fine chemicals industry.

It can be argued, however, that Pollak veers from his subject matter by including long stretches on large, biological molecules and biotechnology, as well as contract research organizations. His chapter on products is divided between small and large molecules, and the technology chapter covers traditional chemical synthesis and biotechnological production. The biotech part is, by some definitions of fine chemicals, out of bounds. But it is arguably an important part of the big picture.

As for his definition, Pollak says fine chemicals are "complex, single, pure chemical substances ... produced in limited quantities (<1,000 metric tons per year) in multipurpose plants by multistep batch chemical or biotech processes. They are sold for more than $10 per kilogram, based on exacting specifications, for further processing within the chemical industry."

We have a winner!

Outsourcing
Recipharm to acquire Consort Medical
People
The fine chemicals sector remembers Peter Pollak
Environment
New Digs For Drug Manufacture
Share X
To send an e-mail to multiple recipients, separate e-mail addresses with a comma, semicolon, or both.
Title: The Fine Line
Author: Rick Mullin
Chemical & Engineering News will not share your email address with any other person or company.