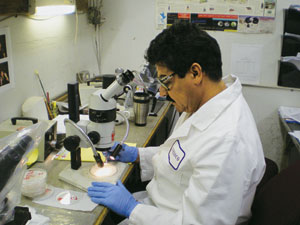 During a typical week, Alfredo Rodriguez, a senior microscopist at Anresco Laboratories, in San Francisco, analyzes roughly two dozen samples of imported foods, from Chinese dried mushrooms to Mexican hot sauce. He runs a variety of tests looking for insect fragments, rodent hairs, and other types of filth.

"In general, every food has something," says Rodriguez. "It's really hard to have samples with zero insect fragments or rodent hairs. Even in the cleanest food, we find something."

But when the degree of contamination or adulteration in a sample exceeds the "defect action levels" permitted by the Food & Drug Administration, Rodriguez issues a positive report to the importer, who is then supposed to submit the lab results to FDA. The agency uses this information to determine whether a detained product meets FDA compliance and sanitation regulations to enter the marketplace.

The problem is that positive reports generated by private laboratories often never reach FDA. "We're doing work for the client. They're paying us, not FDA. If we generate data that are adverse, in many instances the client will say, 'Don't submit it to FDA, just send us the bill,' " says David Eisenberg, president of Anresco.

Some importers may also take their samples from lab to lab for testing until they get a clean report. "It's worth it to the importer to pay an extra couple hundred dollars to get that report," says Eisenberg. "They don't want a violation to show up on their record, because that will create more headaches for them in the future." As a result, he says, FDA receives a "biased stream of information" from the private laboratories.

Len Valenti, who served as international affairs adviser for FDA's Office of the Commissioner until retiring in 2006, says because private labs serve both FDA and the importer, labs often face a no-win situation.

The quality and credibility of private-lab results is gaining much more attention this year as stories of adulteration and contamination in several imported foods have been made public. These include pet food manufactured with vegetable proteins containing melamine, which led to a spate of cat and dog deaths, and several species of farm-raised seafood from China that may contain unsafe additives. Importers of these products now are required to hire a private lab to test their commodities and must present the findings to FDA.

Under current law, FDA has no oversight authority over private labs. For example, the agency doesn't require that private labs doing import testing be licensed or accredited, and the labs aren't required by law to send test results directly to FDA. "There is tremendous regulatory weakness over the labs," says Carl R. Nielsen, FDA director of imports between 1999 and 2005 and now a regulatory consultant with FDAImports.com. "There's no statutory authority to regulate the private labs," he says.

Private labs became involved in testing imported foods in 1974, when FDA began its automatic detention program, which is now called "detention without physical examination." Under this program, all imported food products that are found not to be in compliance with FDA regulations or have a history of noncompliance are detained at the U.S. border until the importer can show five consecutive times, through independent laboratory testing, that the violation has been resolved.

FDA's original intent for the automatic detention program was to give importers the primary responsibility of ensuring that their products comply with FDA regulations. This helps conserve the agency's laboratory resources and serves as a reminder to importers that FDA is a regulatory agency, not a quality-control laboratory. Critics argue, however, that this system leaves the door wide open for unscrupulous importers to cheat. "It's kind of like letting the wolf guard the sheep," says Eisenberg.

The recent high-profile problems have led many to criticize FDA for not doing enough to ensure food safety. For example, at a July 17 hearing before the House Energy & Commerce Subcommittee on Oversight & Investigations, Caroline Smith DeWaal, director of food safety for the watchdog group Center for Science in the Public Interest, told lawmakers that imports of FDA-regulated foods have more than doubled in the past seven years, from 4 million shipments in 2000 to approximately 9 million shipments in 2006. Yet only 0.2% of these products are sent to a lab for analysis, she said.

In an interview with C&EN, Tom Savage, coordinator for pharmaceutical science in FDA's Division of Field Science, explained that more testing won't solve all the problems. "Even if our resources were increased 10-fold, there's probably not much likelihood we could have been able to anticipate the melamine situation, simply because we're not testing for that type of compound," he says.

"So much of what we do is reactive," Savage adds. "A new problem will crop up that nobody anticipated, and we'll have to respond to that. And often that will be either developing a whole new method or modifying an existing method."

"We're always expanding and changing our testing programs," says George Salem, director of the Scientific Compliance & Regulatory Review Branch at FDA's Division of Field Science. He points out that the agency is moving toward more risk-based assessments based on better intelligence. "We're trying to better target the resources we currently have," he says.

Private labs realize that the increasing demand for more testing of foods is a huge opportunity, and they have been pushing for more than a decade to expand their role from just testing detained products to general surveillance of imported foods.

"The government has a need, and the private testing industry has the capacity and the personnel to fill that need," says Joan Walsh Cassedy, a former executive director of the American Council of Independent Laboratories. "For the government to replicate what is already being done in the private sector just doesn't make sense."

The testing issue is not a new one for FDA. Richard A. Baldwin, who retired from FDA in 2003 and was director of the Division of Field Science from 1988 to 1998, notes that many of the concerns regarding the use of private-lab results were addressed by the agency back in the 1990s. "What we could not get then was a clear signal from Congress that sharing could take place with the private labs," he says.

In 1996, FDA held four public meetings around the country to explore ways to improve its policies and procedures related to the use of analytical data from private labs. Among the proposed changes was a requirement that private labs report their analytical results directly to FDA.

In April 2004, FDA again proposed regulations on the use of sampling services and private laboratories in connection with imported foods. The proposal gained few supporters, however, and remains in regulatory limbo. Benjamin L. England, a former regulatory counsel to FDA's associate commissioner for regulatory affairs, explains that the proposed rule is based on data generated in the mid-1990s and does not take into consideration the current state of import safety following the Sept. 11, 2001, terrorist attacks and passage of the Bioterrorism Act.

"They obviously had just taken this thing off the shelf, dusted it off, and published it," says England, now an attorney with Jones Walker Waechter Poitevent CarrÈre & DenÈgre in Washington, D.C., and a regulatory consultant with FDAImports.com. The proposal, he says, "withered pretty rapidly. The word I get from inside the agency is that it's dead."

FDA's announcement earlier this year that it was planning to close seven of its 13 testing labs just as the need for more testing became apparent turned out to be bad timing for the private labs. Some members of Congress interpreted the agency's move as an effort to privatize its testing duties.

The agency has now canceled its plans to close some of its labs, but the issue of how best to use private-lab results remains. Valenti says private labs will never replace FDA's regulatory function. But if FDA and private labs work in tandem and Congress gives FDA the authority to monitor the labs, perhaps through licensing, there could be some real value added.

FDA has begun to be more uniform in requiring that importers who submit test results to the agency sign a statement verifying that the results include all data on all analytical work performed on the product, including work done by other labs. FDA also requires private labs to sign a director's statement indicating whether or not the lab had previously analyzed the product.

On July 18, President George W. Bush established an Interagency Working Group on Import Safety to review current import safety practices and identify steps that can be taken to promote the safety of imported products. On Sept. 10, the group released the Strategic Framework Document on Import Safety. The report recommended several immediate actions, including improving collaboration and information sharing with the private sector to improve the safety of imports. The working group has invited public comments, and a public meeting is scheduled for Oct. 1 in Washington, D.C. The issue of private labs is expected to come up.

"We've reached a tipping point, in that there's enough action in Congress and the public and at FDA to recognize that we need change," says Martin Mitchell, director of Certified Laboratories, a private lab in Plainview, N.Y. "At the end of the day, what we're all about is making sure that the food we eat is safer."