Painters create their art using various formulations of pigments, oils, and other additives 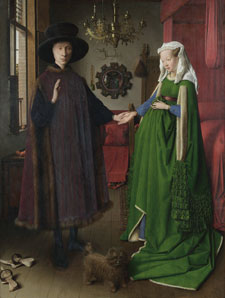 I once asked an artist I know what he did about varnishing his oil paintings. I had read about "varnishing day" at the great salon exhibits in Paris in the 19th century and wondered what it was like for an artist to cover his creation with the stuff of gymnasium floor finishes.

"I don't varnish my paintings," he said, rather haughtily. "I don't get into the chemistry."

It was, in fact, only toward the end of the 19th century that an artist could say such a thing. At that time, the time of the Impressionists, ready-to-use oil paints in tubes made of a lead and tin alloy were introduced, freeing artists from mixing their own colors. This had been an arduous procedure of formulating organic and inorganic pigments, mineral stabilizers, oil, and varnish—a procedure made all the more difficult given that every color and painting surface requires a specific formulation. Today, a specialized industry for artists' colors resides just downstream of the architectural and bridge paint industries. It manages much of the chemistry for a small, diversified, and very demanding customer base whose predecessors had to do it themselves.

The precursors to artists' oil paints date back to the earliest Mediterranean civilization. These paints, called encaustics, employed a system composed of hot beeswax and mineral pigments such as oxides of iron, copper, and manganese. Around the same time, tempera paints were developed, in which pigments are mixed in an egg, water, and vegetable oil medium.

Egg yolk, which anyone who has washed the breakfast dishes can tell you, dries fast and forms a hard film. Getting that hard film and establishing lightfast, durable colors are the chemical tricks of oil paint. The key variable is drying time, which introduces another level of complexity that artists and their suppliers wrestle with to this day.

Vegetable oil—olive oil in particular—became the workhorse oil medium and remained so for centuries. The drying time for olive oil is excessively long, however. So experimentation with media formulas continued as other ingredients, including tree-derived dammar varnish and lead, were added to oil paints to regulate drying time, heighten and protect color intensity, and establish a hard and durable finish.

Oil painting as we know it today emerged from much experimentation with egg-oil tempera painting media by Northern European artists during the 15th century. Flemish painter Jan van Eyck is credited with developing a stable medium based on linseed oil and his painting "Giovanni Arnolfini and his Wife," which hangs in the National Gallery in London, is considered one of the first to employ a linseed oil paint preparation method that is still used today.

Van Eyck's innovation launched a craft and tradition in paint making. Joseph Gyurcsak, artist in residence and technical consultant at Utrecht Art Supplies, one of the world's largest manufacturers of artists' colors, says that back then, "the apprentice for the master artist would grind the paint on a piece of marble, glass, or stone." Today, this is done in a factory using many of the same materials.

Much of the formulation that occurs in the factory revolves around the chemistry of pigments. For example, certain pigments such as phthalocyanine blue and green require higher levels of oil to properly disperse in formulation, says Gyurcsak. This would tend to make the resulting paints thinner and harder to work with if they weren't stabilized at the factory with aluminum hydrate or aluminum stearate. And although heavy metals have been removed from most other types of paints, cadmium is still highly prized (and priced) for its vibrant red to yellow range in artists' paints. Cobalt is a widely used blue and is also used as a drying additive. Lead has been phased out of most paints. Although a basic carbonate of lead is still used in white paint by many manufacturers, most artists use whites that are based on titanium and other materials. Still, there are purists who prime their canvases with lead white —if they're not using the oldest method, coating them with rabbit glue.

Although factories produce formulated paints for artists, most artists' studios look like sloppy laboratories with cans and jars filled with questionable liquids or gels. Much of what fills the jars are oils such as stand oil, which consists of polymerized linseed oil. It is mixed with the factory paint to make the paint more fluid or to adjust the drying time.

Some painters get very involved with controlling paint characteristics such as viscosity, Gyurcsak notes. Various materials, among them aluminum stearate, other metal soaps, and waxes can be used to build up the body of the paint. "Waxes are generally used because artists don't have a lot of the other chemicals handy. They can use wax or even marble dust or calcium carbonate. Slight amounts will make paint stiffer," he says.

Chemistry is also responsible for a 20th-century challenge to oil painting—the introduction of water-based acrylic paint. With the age of "better living through chemistry" came exuberant declarations that oil painting is dead. Fast-drying acrylics were seen as ideal for frenetic abstract expressionist painting.

But not so fast, Gyurcsak says. Oil paint sales at Utrecht, which also manufactures acrylic paints, are rising. Traditional figure painting is coming back with the reemergence of Renaissance styles and the return of some of the old pigments like lapis lazuli. "It all goes around and comes back the other way," Gyurcsak muses.

Instrumentation
AkzoNobel joins Rembrandt exhibition
Agriculture
Art conservators struggle with microscopic eruptions in masterpieces
Analytical Chemistry
How Old Are Your Blues?
Share X
To send an e-mail to multiple recipients, separate e-mail addresses with a comma, semicolon, or both.
Title: What's that stuff? Oil Paints
Author: Rick Mullin
Chemical & Engineering News will not share your email address with any other person or company.