Polymer Devices In The Body

In Your Eye
[+]Enlarge
Credit: Bausch & Lomb
Advances in polymeric intraocular lenses like this Bausch & Lomb lens may allow their insertion through progressively smaller corneal incisions.

IT'S EASY TO FORGET how polymeric materials improve the health and happiness of our daily lives—from commonplace adhesive bandages and diapers to more exotic replacement parts that function within the human body. Discussing the chemistry behind these advances with children and teenagers can engage them in learning about science. And detailing the science for researchers can lead to new collaborations or research projects.

"Polymer Science of Everyday Things," a two-day symposium and related workshop held last month at the American Chemical Society national meeting in Boston, was an unusual program because it ultimately targeted both audiences.

The day before the meeting officially began, K-12 teachers participated in a workshop geared to help them explain polymer science to kids in plain language and give demonstrations. Then, during the first two days of the meeting, those teachers could also get more information by mingling with researchers and attending technical presentations in the Division of Polymer Chemistry that revealed the chemical basis of medical devices.

The teachers' workshop is an important way to get scientific information through the various layers of society, specifically from scientists to teachers to kids and their parents, said Kenneth J. Wynne, a professor of chemical and life sciences engineering at Virginia Commonwealth University and one of four symposium organizers. In addition, he commented that a technical presentation he heard in the symposium that was given by a surgeon may change the direction of his own research.

Boston was chosen for the symposium because numerous scientists in the region are interested in medical devices and science education, according to Ann B. Salamone, president of Rochal Industries in Boca Raton, Fla., and a coorganizer of the symposium and workshop. Similar symposia and workshops were held during two previous ACS national meetings. In Philadelphia in 2004, the symposia covered musical instruments and recording media. Topics from New Orleans in 2003 included polymers in athletic shoes, the kitchen, and body armor.

Mary Harris, a teacher in Missouri, teamed up with Art Coury, vice president of biomaterials research at Genzyme in Cambridge, Mass., to talk about hyaluronic acid, a natural polymeric lubricant found in the synovial fluid sac of human knees and other joints. Senior Scientist Wayne K. Dunshee of 3M and Florida teacher Joyce Brumberger described the many polymer materials and coatings used to manufacture and package different kinds of adhesive bandages. Research Director Eric Luo of Swiss-American Products, a specialty skin care and medical-grade care products company, and teacher Jon Valasek, both based in Texas, discussed hydrogels. Variations of these polyacrylate polymers can, for example, suspend urine in diapers and provide moisture in some wound dressings.

This workshop is just one of many events for teachers held through the year by Polymer Ambassadors, a program operated and funded by the Intersociety Polymer Education Council (IPEC). IPEC is a nonprofit organization of polymer-related professional societies, including ACS Rubber, Polymer Chemistry, and Polymeric Materials: Science & Engineering Divisions; the Society of Plastics Engineers; and the Plastics Division of the American Chemistry Council. Sixteen teachers annually teach up to 5,000 teachers nationwide.

Both the workshop and symposium were sponsored by several companies and universities, as well as the Royal Society of Chemistry, Arkema Foundation, and the National Science Foundation.

The meeting room was packed during many of the symposium talks, which were presented almost exclusively by industry scientists giving overviews of particular applications. Robert A. Weiss, a professor who studies materials for biomedical applications at the University of Connecticut, told C&EN that he came to the ACS meeting largely for this symposium. Getting a broad view of commercial products every now and then stimulates new ideas, he said.

Examples of biomedical uses of polymers that were spotlighted at the symposium include replacement parts in the human eye and spine. Researchers generally agree that polymers work well in these applications because they are inert, generally nontoxic, and often mimic the body's natural cellular makeup.

Credit: 3M
3M's adhesive bandages are an assembly of polymeric materials and coatings.

Research for vision applications has expanded dramatically in the past 10 years, said Jay F. K??nzler, a polymer chemist at Bausch & Lomb in Rochester, N.Y. Among the advances are synthetic materials to replace the natural crystalline lens in the eye. Most patients who get intraocular lens replacements have cataracts, and they come out of the approximately 10-minute outpatient surgery able to see clearly again—in most cases, immediately.

DURING THE OPERATION, the natural lens is removed by sophisticated ultrasonic fragmentation that leaves intact the capsular bag, which is the sac positioned behind the iris that contains the crystalline lens. Surgeons use various tools to insert the new rolled or folded lens into the capsular bag via a 2.5- to 3.0-mm incision in the cornea. The material's composition enables the folded lens to spontaneously unroll once in the capsular bag.

Künzler explained that the materials for a hydrophobic acrylic lens consist of cross-linked copolymers of acrylates and methacrylates that are polymerized by heat. Silicone lenses are elastomers that generally result from copolymerization of vinyl and hydride silicones using a platinum catalyst. Hydrogels usually consist of hydroxymethyl acrylate. Lenses can be produced by lathing or cast-molding.

Künzler told C&EN that polymer chemists and process engineers are working on three main types of intraocular lenses: a lens with a high refractive index that can be inserted through a smaller corneal incision, a lens that can correct presbyopia (inability to attain a sharp focus for near vision), and a lens whose corrective power can be adjusted postoperatively.

Doctors would like to be able to perform the surgery with a syringe because the incision then would only be 1 mm. Künzler described how polymer chemists are working on lenses made with "smart polymers" that can, for example, be stretched into a rod, injected into the eye, and re-formed into a working lens simply with body heat. Dehydrated polymers that expand when exposed to moisture inside the capsular bag are another idea.

As people get older, they may experience presbyopia and need corrective eyeglasses because the natural lens starts losing its elasticity and can no longer change shape as needed. At this point, no intraocular lens on the market can truly restore the full range of near vision, he said.

Künzler also referred to some collaborations between academic institutions and private companies to create polymers that can be modified in the eye after implantation to adjust the corrective power of the lens. He said this would be useful because the patient's vision deteriorates over time. If the power of the lens could be adjusted, say, by exposing it to UV light of a certain wavelength, the patient could avoid subsequent surgeries for new lenses.

Polymers also can come to the aid of patients with debilitating back pain from damaged spinal disks. For these patients, surgery was a dreaded last resort.

Spinal discs, the natural cushions that fit between human vertebrae, can be damaged in many ways, including trauma, scoliosis, tumors, and degenerative disk disease. For some patients, relief can only be found by fusing two or more disks. This surgery is not ideal because healing can take up to 12 months and the patient never regains natural mobility of the joint. 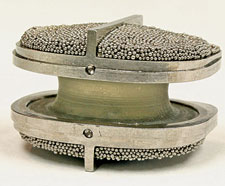 POLYMER CHEMISTS are working on an alternative treatment: replacement disks. The human spine is one of the last joints to be considered for artificial replacement, said Alastair J. Clemow, chief executive officer at Nexgen Spine in Whippany, N.J. He described some options that are available or under investigation for partial and complete disk replacement.

Clemow explained that patients with an intact annulus may be candidates for replacement of the damaged nucleus. After the damaged nucleus is removed, surgeons can pump it full of a shock-absorbing polymer via a small hole in the annulus, he explained.

Researchers are investigating various materials, including polyvinyl alcohol and polyacrylonitrile hydrogels, for this purpose. Clemow said one of the limitations of a hydrogel is that it could creep out should the annulus sustain any additional damage. In addition, hydrogels face the possibility of dehydration over time, which would decrease their functionality.

When the annulus is damaged, a patient may need a full disk replacement. The first generation of disk replacements has just been approved by the Food & Drug Administration. But according to Clemow, there are still concerns about wear and unnatural movement with these prosthetics. Instead, he suggested that second-generation devices in development, including one that uses polycarbonate polyurethanes attached to titanium alloy surfaces, will solve these problems and offer greater potential for long-term pain relief.

Organizers of the polymers workshop and symposium say the tradition of highlighting polymers' impact on our everyday lives will continue at either the fall ACS national meeting in Washington, D.C., in 2009 or the spring 2010 meeting in San Francisco. Topics are still under discussion.

Materials
Plastics glow to warn of invisible cracks
Materials
Opening and closing nano-venetian blinds
Business
Gelest Launches Unusual Silicone
Share X
To send an e-mail to multiple recipients, separate e-mail addresses with a comma, semicolon, or both.
Title: Polymer Devices In The Body
Author: Rachel Petkewich
Chemical & Engineering News will not share your email address with any other person or company.