How Fresh?
[+]Enlarge
Credit: Courtesy of John Lavigne
A simple sensor could help people determine whether to eat or toss that fish. In this prototype, the faint colored line indicates that the condition of the fish is "fair." 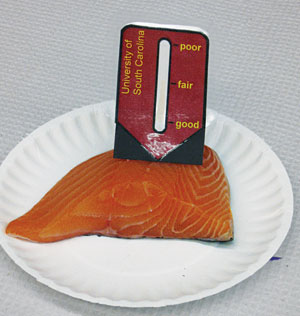 Credit: Courtesy of John Lavigne
A simple sensor could help people determine whether to eat or toss that fish. In this prototype, the faint colored line indicates that the condition of the fish is "fair."

FROM BACTERIA on spinach, melamine in pet food, and unapproved drugs and additives in fish, food safety is increasingly grabbing headlines. What can be done to ensure the safety of the food supply? A first step is developing methods that accurately identify toxic compounds in food.

Recent incidents, such as last year's spinach scare and this year's contamination of seafood imports, have shown the need for improved testing (see page 83). "New techniques on both the detection end and the extraction end are of real interest to a lot of people," said Greg Noonan, a chemist at the Food & Drug Administration's Center for Food Safety & Applied Nutrition, in College Park, Md.

Noonan and his colleague Lowri S. de Jager organized a symposium on new methods for food safety analysis. A second symposium, organized by Michael S. Young and Joe P. Romano of Waters Corp., focused on food analysis by chromatography coupled with mass spectrometry. Both symposia were sponsored by the Division of Analytical Chemistry at last month's American Chemical Society national meeting in Boston.

Protecting the food supply requires analytical methods that are sensitive, rapid, and high-throughput, De Jager said. Identification is more important than quantification, she said, as long as appropriate minimum detection levels are attained.

A first step in most food analysis is extraction of the components of interest from the food. The complexity of the matrix complicates food analysis and affects the performance of any extraction method. Quantification often requires addition of increasing amounts of a standard solution of known concentration to the sample.

Using the banned rodenticide tetramethylene disulfotetramine (tetramine) as a model compound, De Jager compared several modern extraction techniques, including solid-phase microextraction (SPME) and sorptive stir bar extraction. She spiked tetramine into a variety of foods and beverages (none of the samples started out with it). With all the methods, less of the tetramine was recovered from more complex foods such as applesauce and peanut butter than from beverages. The most sensitive method—particularly for the solid foods—extracted the tetramine with polymer-coated magnetic stir bars.

Another sample preparation method involves the use of molecularly imprinted materials. These can be thought of as artificial receptors made by polymerizing and cross-linking a material in the presence of a template molecule. When the template is washed away, a binding site for the analyte remains.

One problem with molecularly imprinted materials is that the standard methods for making the materials rely on organic solvents, Diaz-Garcia said. She turned to sol-gel technology as a way to make the methods and materials more water-friendly. The sol-gel process is used to make glass or ceramic materials from a colloidal suspension of solid particles. She successfully used nafcillin-imprinted sol-gels to detect the antibiotic, which is used to treat farm animals. 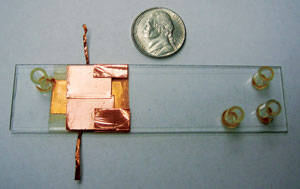 Credit: Courtesy of Greg Collins
This chip-based capillary electrophoresis device can be used for beverage analysis.

MICROFLUIDIC DEVICES are another tool that may be useful for food analysis. Chemist Greg E. Collins and coworkers at the Naval Research Laboratory (NRL) in Washington, D.C., are using chip-based capillary electrophoresis (CE) to analyze beverages. Such chip-based methods are faster than other methods and are potentially portable, Collins said.

In one case, Collins and Qin Lu use contactless conductivity detection, in which the electrodes are situated above the analyte-conveying microchannel but don't touch it. This alleviates any worries about sample fouling the electrodes.

They measured sodium monofluoroacetate, a banned rodent poison, in juice (all samples were intentionally spiked with the poison). They diluted and filtered the juice prior to analysis to prevent clogging of the microchannels. To eliminate interference from matrix components, such as citrate and other organic anions, they decreased the pH of the CE running buffer from the 6.5 usually used with conductivity detection to 3.5 using citrate itself as the buffer component.

In other work, Collins and Carl Newman, a National Research Council postdoc at NRL, used chip CE with ultraviolet absorbance spectral detection over a broad wavelength range to measure the poisonous alkaloids nicotine, colchicine, strychnine, and aconitine in juice and milk. They used micelles (aggregates of surfactant molecules) in the buffer to concentrate the alkaloids and improve detection. At the point of detection, a "bubble cell"—a deeper segment of the microchannel—lengthens the light path and improves sensitivity. The depth of the bubble cell must be carefully controlled to balance the improved sensitivity with degraded separation resolution.

Mass spectrometry is another powerful tool for monitoring food safety. FDA's Noonan used a new ionization method called DART, or direct analysis in real time, to look for perfluorochemicals in food packaging and wrappers. This family of chemicals is permitted to contact food under specified conditions. Recent studies on one class of these chemicals, polyalkyl phosphate surfactants, suggest that their ingestion and metabolism may lead to increased levels of perfluorooctanoic acid, a known rat carcinogen, in blood and tissue.

With DART, samples are analyzed without any preparation or extraction. Noonan analyzed perfluorochemicals directly from paper sandwich wrappers, pizza boxes, and microwave popcorn bags. He obtained "mixed results," he said. He could identify some expected ions but not others.

At Waters, meanwhile, MS is being paired with liquid chromatography. Ultra-high-performance liquid chromatography (UPLC), with its higher pressures and smaller column-packing materials, speeds up the analysis and improves resolution and sensitivity relative to standard LC, according to Romano, senior manager for chemical analysis at Waters. Combining UPLC with a triple-quadrupole mass spectrometer improves the quantitative accuracy.

Using UPLC-MS, Romano analyzed 52 pesticide residues in baby cereals. Regulatory agencies require that the mass spectrum identify at least two transitions—the combination of particular parent and fragment ions—per pesticide to confirm a pesticide's presence, so Romano needed to monitor a total of 104 transitions. He used multiple-reaction monitoring (MRM), in which the mass spectrometer is rapidly switched between specific parent and fragment ions, rather than scanning the entire mass spectrum. MRM could keep up with the rapid UPLC separation, making it possible to analyze all 52 pesticides in 7 minutes.

Michael S. Young, another Waters chemist, described the analysis of sulfonamide antibacterial drugs (sulfa drugs) in milk using UPLC-MS. Because sulfa drugs have a common aminobenzyl fragment ion, Young did a full scan on the first quadrupole and monitored the common fragment with the second quadrupole. He was able to analyze 10 sulfonamides in 3.5 minutes.

FISH is of particular concern on the safety front. Zongwei Cai of Hong Kong Baptist University analyzed malachite green (MG) in fish from markets in Hong Kong. MG prevents fungal and parasitic infections in fish, but because it is harmful to humans, it has been banned in aquaculture in many countries, including China. Nevertheless, MG and its primary metabolite, leuco-MG, continue to be found in fish.

Because Cai wants to analyze MG and leuco-MG simultaneously, mass spectrometry is a better choice than fluorescence spectroscopy as leuco-MG lacks a fluorophore. Using mass spectral analysis, Cai detected MG and leuco-MG in grouper bought at fish markets but not in tilapia or carp purchased at supermarkets, suggesting that the fish in supermarkets may be safer.

Mass spectrometry certainly can be used to analyze fish in the laboratory. But what if people want something they can use at home to tell them if a piece of fish is safe to eat? John J. Lavigne hopes that his conjugated polymer sensors will solve that problem.

Lavigne, an assistant chemistry professor at the University of South Carolina, is developing sensors for biogenic amines such as histamine, cadaverine, and putrescene. These and many other amines are naturally present in fish, but elevated levels indicate spoilage.

The color also depends on the solvent that the polymer is in. By using one polymer in several different solvents, Lavigne can create a cross-reactive sensor array. He can achieve a similar effect in water by using different metal counterions.

He is turning the polymer sensor into a dipstick test for fish freshness. The polymer is placed on a strip of paper. When a food sample is applied, a line of color moves along an indicator strip on the paper. The further up the strip the line travels, the worse the condition of the sample. He has used the dipstick to measure histamine spiked into canned tuna and other amines that form as part of fish degradation.

Currently, the sensor gives a graduated response. "If it's good, you can eat it; if it's poor, you don't eat it; if it's fair, what do you do?" Lavigne says. "It may just depend on how hungry you are." He wants to calibrate the response so that the test provides clear answers about whether something is safe to eat.

These and other sample prep and detection techniques could help ensure food safety. With the food supply traveling from all corners of the globe, such analytical techniques will only grow in importance. Noonan believes that fast detection techniques alone won't provide the speed needed for efficient food safety monitoring. "You can have a fast analysis, but it's not very worthwhile if you're still spending an hour and a half doing your sample workup," he said. "The throughput is not always on the analytical end."