Conference uses science to build bridges in the Middle East 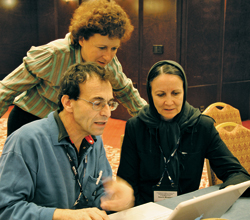 LAST WEEK, 90 scientists from 12 Middle Eastern countries and the Palestinian Authority and six Nobel Laureates spent four days on the neutral ground of Istanbul, Turkey, discussing regional research and environmental issues. In addition to enabling open discussions among scientists who might not ordinarily be able to do so, the biannual meeting yielded a communiqué urging immediate attention to the drinking water crisis in the Gaza Strip.

"Far away from Middle Eastern politics, you will find the people who can live together, eat together, and discuss science together," says Yousef Abu-Mayla, director of the water research center at Al-Azhar University, in the Gaza Strip. "At this conference I can say, 'Here is my work, what do you think,' regardless of the citizenship."

The conference is the third in a series of meetings whose aim is to engender goodwill and collaboration among Middle East scientists that will hopefully filter back to the politicians, says organizer Zafra Lerman, an Israeli-born chemist at Columbia College Chicago.

The previous two meetings, in 2003 and 2005, were held in Malta, and this provenance has left its stamp in the conference's nickname, "Malta III," even though this year's event was held in Turkey. The official title was "Frontiers of Chemical Sciences III: Research & Education in the Middle East."

"The conference gives the possibility of scientists from the Middle East to meet with each other while listening to Nobel Laureate lectures," says Miriam Waldman, an environmental policy consultant and former official in the Israeli Ministry of Science. "In addition, there are scientific workshops that are dedicated to problems of the region."

In fact, Abu-Mayla reported measurements indicating that drinking water in several Gaza Strip communities is contaminated with high levels of lead, nitrate, and chloride. His data inspired the creation of a communiqué aimed at international organizations and governments. "There are some concerns that transcend politics," reads the communiqué. "We urge that the interested governments and agencies ignore their current disagreements and by drawing on scientific expertise, urgently address the issue of water in the Gaza Strip."

Pollution
Satellites can now see air pollution inequality within cities
Persistent Pollutants
Goodbye to some PFAS in food packaging
Pollution
Mercury makes it deep into marine trenches
Share X
To send an e-mail to multiple recipients, separate e-mail addresses with a comma, semicolon, or both.
Title: Middle Ground
Author: Sarah Everts
Chemical & Engineering News will not share your email address with any other person or company.