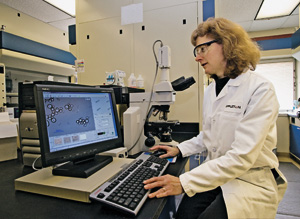 On March 26, 1954, National Cash Register sold its first roll of carbonless paper. Developed in collaboration with Appleton Coated Paper, the product harnessed brand-new microencapsulation technology to do away with cash register ink ribbons and the messy carbon paper that, at the time, was needed to make duplicates of typed or handwritten forms.

Today, and several corporate reshufflings later, Appleton is the world's largest producer of carbonless paper. Last year, the Appleton, Wis.-based company sold hundreds of millions of dollars of it to makers of business forms, checkbooks, credit card receipts, and the like.

Yet after enjoying decades of often heady growth, the carbonless paper market is in decline. Although Appleton's 2007 carbonless sales were essentially even with those of 2006, the overall market has been shrinking for the past seven years. Company executives are well aware that in the Internet age carbonless paper is no longer the bureaucratic godsend it once was.

They are responding by investing in businesses such as thermal paper, which uses heat rather than pressure to create an image, and security paper that ensures document legitimacy. In addition, for the first time in decades, the company is offering its encapsulation technology and know-how to other companies.

After three years of incubation, Appleton has gone public with an encapsulation business called Encapsys. And in a show of credibility in January, it announced an agreement with Procter & Gamble to encapsulate the fragrance used in a new variety of Downy liquid fabric softener, one of P&G's so-called billion-dollar brands.

Still, experience and a marquee contract aside, Appleton's business success is by no means ensured. The encapsulation landscape is thick with chemical makers, flavor and fragrance houses, and specialist firms that offer competing technology. Furthermore, although microcapsule-based scratch-and-sniff products are ubiquitous, such uses offer only modest sales potential. With the exception of carbonless paper, encapsulation enthusiasts can point to few high-volume markets for the technology.

Ted Goodwin, Appleton's vice president of business development, maintains that P&G's Downy is an example of the kind of significant opportunity that awaits encapsulation-provided it is backed by the right combination of proven technology and collaborative thinking. "We see opportunity anytime you need controlled release of a chemical," he says.

In Appleton's traditional microcapsule process, also known as coacervation, the ingredient to be encapsulated is dispersed in a polymer-rich aqueous solution. The solvent characteristics of the medium are then changed, causing the polymer to undergo a phase separation. The polymer-rich phase spontaneously deposits itself as a coating around the dispersed ingredient and is solidified into a microcapsule, typically about 10 µm in size.

The ingredient is later released when the microcapsule wall is ruptured by mechanical pressure-such as when a pen presses against the dye—filled capsules of a credit card receipt—or by friction. Appleton's original polymer was gelatin or gum arabic, but today's carbonless paper system relies on urea-formaldehyde and melamine-formaldehyde resins.

According to Goodwin, P&G and Appleton found each other in 2004. Appleton was considering stepping out with its encapsulation technology, and P&G was looking for outside partners to help it create longer lasting "in-wear freshness" in laundry detergents and fabric softeners.

Finding enticing fragrances is one thing for P&G product developers, but keeping a scent fresh through the cycle of washing, drying, and wearing is a much bigger challenge. They needed a fragrance system that could persist in the bottle, latch onto clothes once the softener was added into the washing machine, and then hang onto the fiber through the tumultuous process of rinsing and drying. They figured that encapsulation might do the trick.

While P&G worked to guide the fragrance to clothing, Appleton modified its capsule system to stand up to the rigors of the wash. "We had to make our capsule like to be in Downy," recalls Jaime Hillend, Appleton's executive director of market development. "We had to modify the capsule wall and the chemistry around it."

Pleased with the results of the collaboration, P&G launched Downy Simple Pleasures Radiance Collection nationwide last month. Goodwin says the two companies are now working together on other opportunities from across P&G.

And Appleton doesn't want to stop there. According to Goodwin and Hillend, their firm is targeting industries such as adhesives, inks, fragrances, toners, and sealants. They think customers will embrace encapsulation if it can help them eliminate a processing step, use less of a pricey ingredient, or incorporate a new ingredient that wouldn't work without encapsulation.

Curt Thies, founder and president of Thies Technology, a Nevada-based encapsulation specialist, agrees that encapsulation offers much industrial potential. As an example, he points to highly reactive ingredients such as isocyanates and epoxy curing agents that could be delivered more safely and effectively with the right encapsulation technique.

As for Appleton's chances for success, Thies isn't ready to judge. He was a National Cash Register research chemist and microencapsulation section head from 1964 to 1972, an era during which the firm was trying to exploit its encapsulation technology for applications other than carbonless paper. "Many current encapsulation procedures are based on old technology," he says. "But Appleton knows what they are doing, and they can maximize performance of the capsules they produce."

Thies does caution, however, that encapsulation is a hot topic in the chemical industry and the subject of a growing number of scientific papers. "I don't think there is a big company out there that isn't looking at it," he says.

Goodwin and Hillend say they are ready for the competition. In addition to commercially proven technology, Encapsys boasts 40 dedicated staffers, 20 of whom are scientists, plus the resources of a $1 billion-per-year company that is based on encapsulation.

Thies points out that the media attention on formaldehyde emissions from government-issued trailers for Hurricane Katrina victims could give some potential customers pause about the use of formaldehyde-based reactions to form microcapsules. Goodwin counters that Appleton has the ability during capsule-making to scavenge any residual formaldehyde to nondetectable levels.

In addition, Hillend notes, Appleton isn't wedded to formaldehyde-resin chemistry. He says company scientists are developing a variety of capsule chemistries for a variety of ingredients. Indeed, a look at recent filings with the U.S. Patent & Trademark Office reveals that Appleton has applied for patents on products as diverse as UV-curable microcapsules, encapsulated structural adhesives, and polyester or nylon capsules.

With 50 years of encapsulation experience behind them, Goodwin and Hillend say they are ready to hit the market and that they are not intimidated by the chemistry firepower that competitors might bring to the field. "Appleton has always been a chemical company," Hillend says. "We just spend a fair amount of time using paper to deliver it."

Business
How encapsulation is taking root in the laundry room
Materials
Behind Closed Doors
Business
New Product Forms
Share X
To send an e-mail to multiple recipients, separate e-mail addresses with a comma, semicolon, or both.
Title: Encapsulating A New Business
Author: Michael McCoy
Chemical & Engineering News will not share your email address with any other person or company.