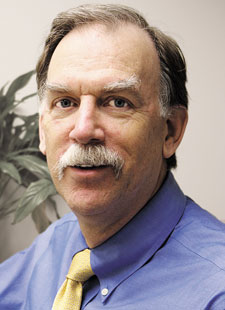 Porter (Bob) R. Peoples, the new director of the American Chemical Society's Green Chemistry Institute (GCI), is one of those people whose names say something about who they are or what they do. For Peoples, he is a people person. That personality trait bodes well for GCI and should serve Peoples well in his role as ACS's primary advocate for green chemistry and engineering at a time when global interest in sustainability—the ultimate target for green chemistry—is reaching a fever pitch.

Peoples, who took up his new position on March 17, brings a wealth of chemistry knowledge and industrial experience to GCI. He received a B.S. in chemistry and math from Montclair State University, in New Jersey, and a Ph.D. in physical organic chemistry from Purdue University. Peoples spent 23 years at Monsanto and Monsanto's spin-off company Solutia, which was created in 1997, working in the area of new carpet technology and product development. And he is no stranger to ACS, as he has served as a local section chair and on national committees in the past.

While at Solutia, Peoples became involved in green chemistry by creating and managing the company's carpet recycling and sustainability program. His work on that front included helping to create the Carpet America Recovery Effort (CARE), a groundbreaking industry-government initiative designed to channel used carpet away from landfills and into new products such as more carpeting and plastic auto parts. After serving as CARE's first executive director, Peoples is not shy in pointing out that the initiative achieved a milestone late last year when it surpassed 1 billion lb of carpet recycled.

When Solutia filed for bankruptcy in 2003, Peoples took it as an opportunity to move in a different direction. His involvement with CARE opened a door for him to become the sustainability director at the Carpet & Rug Institute (CRI), a nonprofit trade association that serves as a science-based resource for the carpet industry.

His years at CARE and CRI were gratifying, Peoples says. He was touched by the well-wishes from his colleagues across the carpet industry as he began the transition to GCI. "They made me feel like I had made a difference—that I had an impact in what I was doing—which is a fundamental motivation for me. I want to infuse that same energy and enthusiasm into the Green Chemistry Institute."

Much of what Peoples hopes to accomplish at GCI will be based on the current sweeping interest in sustainability, he says. "The idea of sustainability in general, and green chemistry and engineering specifically, has exploded on the worldwide scene," Peoples notes. "I like to tell people that there's a sustainability tsunami sweeping the globe."

This interest reminds Peoples of the initial impact of Rachel Carson's book "Silent Spring" in the 1960s. "That was a catalyzing event for raising environmental awareness," he says. "It caused people to see clearly for the first time what human activities were doing to the planet."

Al Gore's movie, "An Inconvenient Truth," is the current generation's "Silent Spring," he observes. "The movie has helped the previous generation remember environmental issues and made people of a new generation aware of those issues for the first time," he says. "People are starting to connect the dots again. That awareness is important because it becomes a driver for us at GCI."

Peoples says that he and his staff are kicking around ideas about how GCI will move ahead. Key areas of ongoing and future focus include education and professional training, establishing metrics and setting standards for green chemistry, and informing policymakers.

"There will be some changes," he says, "but for now we are talking about three Cs: convene, coordinate, and catalyze. We are going to convene and coordinate scientists and engineers to catalyze a global dialogue on chemistry's contributions to sustainability. We will be looking to build global partnerships. And we are going to promote the GCI brand so that there's recognition awareness—an authority—so that people will look to us as the global source of information on green chemistry and sustainability."

GCI already has a leg up in some areas, Peoples points out. For example, one of GCI's crown jewels is its Pharmaceutical Roundtable. GCI worked with major pharmaceutical firms to establish the roundtable in 2005 as a working group with a mission to identify and overcome common drug discovery and process chemistry challenges. The group has singled out reactions and processes that need cost and environmental improvements, as well as a wish list of more efficient reactions that chemists would like to add to their research toolboxes. To that end, the roundtable has issued nearly $500,000 in industry-funded research grants to four academic researchers during the past year.

"We are looking at the roundtable as a successful model to clone in other areas," Peoples says. "It's too early to name specific initiatives, but we have several solid ideas that we think we can catalyze."

In moving GCI forward, Peoples thinks it will be important to establish clear definitions about what green chemistry and sustainability means. "Green chemistry does not stand for the old model of regulation that industry fears," he says. "Regulation is a means of trying to fix something that is already broken. Green chemistry and engineering is about making sure we don't create problems from the beginning. We are attempting to make regulation obsolete.

"We have already started down that path," he continues, "but we can't let being perfect get in the way of being good enough and slow us down. It's better to get started and learn as we go and make modifications along the way—to be like nature and evolve. Nature is very good at keeping what works and getting rid of what doesn't work over time. That is what we have to do as scientists and engineers to solve sustainability issues, and green chemistry is a process—a framework—for helping us to do it."