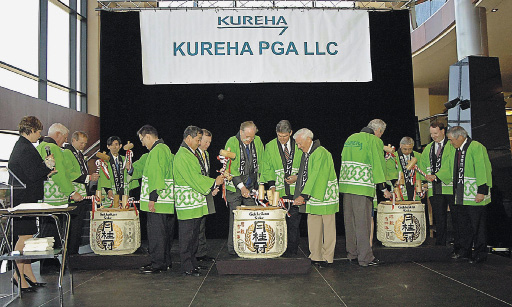 On a drive along the Kanawha River from Charleston, W.Va., to the DuPont plant in nearby Belle, the sights include a Moose Lodge, the local Boy Scouts headquarters, and Daniel Boone Park. Executives from Japan's Kureha making the trip can be excused for thinking, "We're not in Tokyo anymore."

Those executives are placing a big bet on the faraway town of Belle. At that DuPont facility the Japanese firm plans to spend $100 million on the world's first commercial-scale plant for polyglycolic acid, a polymer they say has the potential to remake the market for polyethylene terephthalate, the bottle plastic better known as PET.

New-to-the-world plastics don't have a great track record these days. Although corporate chemists dream of inventing the next nylon, the chemical industry's recent history suggests such finds are becoming rare. Dow Chemical took what looked like a $150 million loss in 2004 when it threw in the towel on polylactic acid. Shell Chemicals sunk tens of millions of dollars into its Carilon aliphatic polyketone before closing the business in 2001.

But as Takao Iwasaki, Kureha's president and chief executive officer points out, Kureha isn't Dow or Shell. It's a Japanese company that is willing to bide its time and wait—decades if need be—for a new product to pay off. "It's the Japanese way," he says.

Iwasaki, 60, is nearly fluent in English and much more vivacious than stereotypes of Japanese executives would suggest. Yet in some ways he is a typical Japanese employee at a typical Japanese company. He joined Kureha after college and spent the next 38 years there. Like other Japanese for whom lifetime employment is not unusual, he advanced methodically through positions in research, production, and management, slowly accumulating skills and knowledge of the company.

An organic chemist, he started in process chemistry and then spent seven years helping to run Kureha's main plant in Iwaki, Japan. His next job was in licensing, and he took his first trip outside Japan to Parkersburg, W.Va., where BorgWarner was making polymer modifiers with Kureha technology.

A few years later, Iwasaki was transferred back to the lab and put to work on polyphenylene sulfide (PPS), then a nascent engineering polymer. As he recalls, "I did very basic research on PPS, found a new process to make it, and got a patent." Today, Kureha is the world's largest maker of PPS, producing it in Japan and the U.S. through the Fortron Industries joint venture with Celanese.

Although PPS is a good business today, it took Kureha some 30 years to turn a profit, an investment in time and resources that few Western firms would be willing to make. "If we had introduced the American way of thinking, PPS couldn't have survived," Iwasaki says. "After the start-up of a plant, the first 10 years are always red ink."

To date, Kureha has spent close to 15 years developing polyglycolic acid, or PGA, and Iwasaki says the company is prepared to spend 10 more. "Nobody wants to wait 10 years," he says, "but at least 10 years are necessary to create a brand-new business. Some companies are not so patient."

Manufactured from glycolic acid, a naturally occurring organic acid, PGA is the simplest polyester. Chemists have known about it for years—nylon inventor Wallace Caruthers is said to have admired it—and can readily make it on a small scale for dissolvable medical sutures and other specialized products.

Production on an industrial scale, however, has proven elusive. Glycolic acid polymerizes easily through esterification, but the resulting by-product water molecules tend to turn around and hydrolyze or break the ester bond, chopping up the polymer into short strands. Attempts to drive off the water with heat only speed up the unwanted reaction.

With an ease that would elude most U.S. chemical company CEOs, Iwasaki describes Kureha's work to get around the water problem. "Our magic is that our researchers found a way to make glycolide—a dimer," he says, making a ring by touching his thumbs to the pointer fingers on the opposite hands.

In the Kureha process, the glycolide rings line up; then, at the right concentration and in the right solvent, they simultaneously open. "Suddenly it's connected, and we get a high-molecular-weight polymer," Iwasaki says. Kureha scientists have gone on to develop process technology to deal with the highly "sticky" dimer and to discover polymer end groups to control unwanted hydrolysis.

Armed with their breakthrough, Kureha engineers built a 100-metric-ton-per-year pilot plant in Iwaki to perfect the process and interest customers. After a few years, executives began to consider possible sites for a bigger plant. The company looked around the globe, but the right spot was always pretty clear: the 80-year-old Belle facility where DuPont operates the world's largest glycolic acid plant.

According to Gary W. Spitzer, general manager of DuPont's chemical solutions business, DuPont has manufactured glycolic acid in Belle for 60 years. The chemical is best known as an ingredient in α-hydroxy acid facial treatments; other applications range from cleaning products to metal treatment to leather tanning. DuPont executives are coy about how they make glycolic acid, but it likely involves formaldehyde and carbon monoxide.

West Virginia officials are happy enough just with Kureha's first $100 million investment and the jobs—250 in construction and 50 in plant operation—the company expects to bring to the state. The presence at the ground breaking of West Virginia Gov. Joe Manchin and U.S. Democratic Sen. Jay Rockefeller is a testament to the rarity of big chemical investments in a state that has seen the industry steadily shrink over the years. Employing close to 5,000 people in its heyday, DuPont's Belle site supports only about 550 employees today.

While Suzuki has his dreams, he also knows that Kureha faces some eye-opening hurdles. Audaciously, the company wants to produce an exotic plastic on a scale never before attempted and then sell it into a completely new market. "It's&nbsp;a&nbsp;double challenge," Suzuki admits. 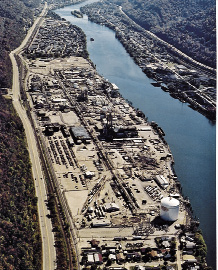 Although PGA is used in specialty applications such as medical sutures, the manufacturing hurdles have blocked large-volume uses. Kureha is aiming at the massive PET bottle market, where it will try to get soda and beer companies to adopt its new material as a gas-blocking interlayer.

Izuru Isogami, general manager of Kureha's PGA department in Japan, explains that the PET potential is twofold. As plastics go, PET is somewhat porous; bottles must be pretty thick to keep carbonation from leaking out. PGA, though, provides a gas barrier 100 times that of PET, so container makers can trim PET use more than 20% by sandwiching a thin layer of it inside their bottles.

Because PGA is effective at only about 1% by weight, Kureha expects to be able to sell it for 10 times the price of PET. Soda bottlers would still save money and also be able to market their reduced-plastic bottles as environmentally friendly.

On top of the plastics reduction opportunity, Isogami says, PGA can ease the fabrication of small PET soda bottles, which are saddled with a relatively high surface area through which carbon dioxide can escape. In order to use PET today, soda companies must resort to using specially coated bottles or adding inner layers of current barrier plastics such as ethylene vinyl alcohol or MXD nylon.

These treatments, however, compromise bottle recycling, Isogami says, and in practice, bottlers typically turn to glass or metal for their small containers. PGA, in contrast, breaks down during the bottle recycling process, Kureha says. "It is easy for us to replace MXD nylon with PGA," Iwasaki asserts.

The new polymer has other potential applications. For example, Kureha says PGA can enhance the gas and moisture barrier properties of polymers made from renewable resources. Film and fiber applications are also possible. All in all, Iwasaki expects that PGA could turn into a $1 billion-per-year business for Kureha.

Industry watchers are a little more cautious. A report in the newsletter Packaging Strategies points out that barrier technologies are used on fewer than 2% of PET containers today. Packaging companies are keen for viable barriers but have rebuffed them so far because of high costs. "PET bottle barrier protection has been full of promise but short on results," the report says.

While Kureha's CEO is bullish on PGA, for him the polymer represents something more: the realization of a change in strategy at a company that has struggled since Japan's humbling recession of the 1990s. "Every company was thinking about how to survive," Iwasaki recalls. "We had to ask if we could continue in our existing businesses."

One of those businesses was polyvinyl chloride, a commodity plastic that both Japanese competitors and Asian newcomers were able to make more cheaply than Kureha. In typical Japanese fashion, Kureha wanted to exit the business but without firing people. "It took several years," Iwasaki says.

By 2001, the company was restructuring in earnest—completing the withdrawal from PVC, selling its polymer-modifiers business to Rohm and Haas, and investing in high-end specialty products. For several years, profits rose but sales fell. According to Iwasaki, fiscal 2006 was the first year in many that both sales and profits increased. The trend continued into the company's 2007 fiscal year, when sales rose almost 8% to $1.2 billion.

Also in typical Japanese fashion, Iwasaki doesn't claim credit for Kureha's achievements, financial or otherwise. In a Japanese company, he says, "success doesn't belong to the management. It belongs to the company. If PGA becomes successful, it was not my job. I was not involved for 20 years. I was just lucky to pick the fruit."

Sustainability
Firms back chemical recycling of plastics
Business
Kevlar jobs not bulletproof at DuPont
Business
BioAmber crafts a succinic acid market
Share X
To send an e-mail to multiple recipients, separate e-mail addresses with a comma, semicolon, or both.
Title: Kureha's Gamble
Author: Michael McCoy
Chemical & Engineering News will not share your email address with any other person or company.