Momentum Builds Against Bisphenol A

Move to eliminate chemical from some products begins

by Rick Mullin and Susan Morrissey 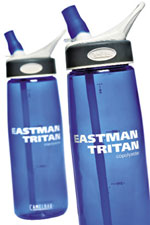 Canada moved last week to become the world's first country to set exposure limits on bisphenol A (BPA), a high-volume chemical used to make polycarbonate and epoxy resins. U.S. politicians proposed similar measures, and a leading supplier of plastic drinking bottles announced that it will stop manufacturing products that contain the chemical.

Bowing to public concern over the health effects of BPA, bottle maker Nalgene said it will drop the use of polycarbonate. In addition, Wal-Mart, the world's largest retailer, announced it will stop stocking baby products containing the chemical immediately in Canada and early next year in the U.S. Toy store chain Toys 'R' Us has also announced a BPA phaseout for these products.

Scrutiny of BPA increased earlier this month with the release of a draft report by the U.S. National Toxicology Program (NTP) on the health effects of the chemical. The report concluded that although BPA is generally safe, there is "some concern" that it may cause neural and behavioral changes in infants and children at current exposure levels (C&EN, April 21, page 11).

The proposed ban in Canada targets polycarbonate baby bottles. Canadian Minister of Health Anthony P. Clement frames it as proactive. "Although our science tells us exposure levels to newborns and infants are below the levels that cause effects, it is better to be safe than sorry," he said, announcing the action. Barring any compelling information brought to light during a comment period that started on April 19, he added, the ban will take effect in mid-June.

Canada's decision is based on its risk assessment of the chemical. The study found that BPA is not a concern for adults but may pose a risk for newborns and infants.

Meanwhile, members of Congress are citing the NTP study in pushing for limits on BPA. Sen. Charles E. Schumer (D-N.Y.) announced plans to introduce legislation to ban BPA in all children's products and "food contact" containers, such as water bottles. On the House side, the Energy & Commerce Committee, led by Reps. John D. Dingell (D-Mich.) and Bart Stupak (D-Mich.), is investigating the safety of BPA in baby products as part of its oversight of FDA.

Manufacturers eliminating the chemical say they are taking action even in the absence of conclusive evidence of serious health risks. "Based on all the available scientific evidence, we continue to believe that Nalgene products containing BPA are safe for their intended use," says Steven Silverman, general manager of Nalgene's Outdoor line of polycarbonate containers. "However, our customers indicated they preferred BPA-free alternatives." Last week, a California mother filed a lawsuit against Nalgene claiming the company knew that BPA could leach from its bottles.

Nalgene recently introduced a new line of bottles manufactured with an Eastman Chemical copolyester called Tritan. CamelBak, another supplier of polycarbonate bottles, is also switching to the Tritan material. Last month, Eastman announced that it will expand capacity for the copolyester at its plant in Kingsport, Tenn.

In the infant care market, Playtex announced last week that it will phase out BPA-containing products by the end of the year. It is also distributing 1 million samples of a baby bottle product that employs disposable polyethylene bag inserts.

Polycarbonate resins account for roughly three-quarters of U.S. demand for BPA; epoxy resins for high-performance coatings make up nearly all the rest. Most uses of these products—including automotive parts, compact discs, flooring products, and electronics—are not affected by the BPA initiatives.

According to Mark Walton, communications leader for chemical and health issues at Dow Chemical, the number two U.S. producer of BPA, the impacted markets are "specialty" areas. "Our products tend not to be in the primary markets affected by the action in Canada," Walton says. "We are still trying to understand what kind of impacts current events could have on Dow's business."

Environment
FDA Bans BPA In Baby Bottles
Policy
Lawmaker Requests Bisphenol A Ban
Policy
Industry About-Faces On BPA Regulations
Share X
To send an e-mail to multiple recipients, separate e-mail addresses with a comma, semicolon, or both.
Title: Momentum Builds Against Bisphenol A
Author: Rick Mullin and Susan Morrissey
Chemical & Engineering News will not share your email address with any other person or company.