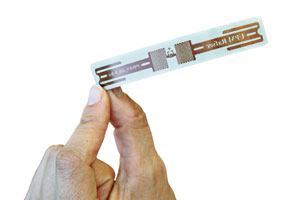 Last week, amid Spanish tapas and cocktails at a conference mixer in Barcelona, I was served something far less appetizing: the news that for five days, unbeknown to me, a radio-frequency infrared device (RFID) hidden in my name tag had been reporting my conference attendance habits to organizers.

A radio reporter from southern Germany showed me the RFID TAG stuck between the front and back sides of my name tag; he had just discovered the device in his own badge. Suddenly, I had an explanation for the twin pillars at the doorway of every session room and at the main building’s entrance: They were the RFID readers. The whole situation irked me.

Although I’m reluctantly getting used to having my buying habits monitored through frequent flyer and supermarket savings cards, at least I am knowingly giving up my private information in exchange for cheap orange juice. But unlike the voice that announces when my conversation with technical support will be recorded “for quality assurance,” nobody told me my conference activity would be monitored. I wasn’t the only one taken unaware; many of the other attendees at the mixer were likewise put out.

So the next day, I went to the conference office headquarters and asked to see the information they had acquired about me. Within a minute or two, a technical support staff member opened a spreadsheet that contained a potpourri of my personal information: my name, the fact that I was a member of the press, my affiliation (C&EN), my hometown, as well as the precise time—down to the second—that I entered and left every single session I attended. Even a short break to use the restroom in the middle of a talk on regulating functional foods had been time stamped.

Perhaps because I looked entirely flabbergasted, the guy who showed me the spreadsheet cheerfully noted that the company was not allowed, by Spanish law, to sell my data. It was a minor consolation.

When I returned home from the conference, I called Tony Melis, vice president of business development at Laser Registration, a Montreal-based company that specializes in providing RFID services at conference and trade shows, to get a sense of how common this monitoring is. Melis says RFID tracking is most popular at trade shows and medical conferences, but the technology is slowly catching on at science conferences, too.

He explained that as attendees wander into the range of an RFID antenna, which is often placed at the entrance of session rooms or exhibition halls, their RFID tags pick up the antenna’s signal and return an encrypted message about their identity.

The price for each RFID tag is about $1.00, but the antennas are much more costly: The rate for antenna rental is about $750 per day. The conference I attended in Barcelona had 14 antennas, 3,500-plus participants, and lasted five days. So the cost of monitoring such an event would be about $50,000.

Conference organizers typically employ the RFID technology to monitor attendance at competing conference sessions or in exhibition halls, or the tags can be used by employers to track employee participation at professional development seminars, Melis says. “The days you go to a meeting in a sunny destination, check in at the conference in the morning, and then go to the beach—those days are over.” But unlike the situation in Barcelona, Melis says his company advises its clients to let conference participants know they are being monitored and how the data will be used in order “to avoid a backlash.”

Backlash is right. I was so taken aback that the first thing I did after discovering my RFID tag was to rip it off. And next time I register at a conference, I won’t immediately dig into the abstracts. The first thing I’ll do is check whether Big Brother is stuck to the underside of my conference badge.

This week's column was written by Sarah Everts. Please send comments and suggestions to newscripts@acs.org.

Pharmaceutical Chemicals
CPhI Worldwide pharmaceutical ingredients show is canceled
Instrumentation
Pittcon goes ahead despite coronavirus
Informatics
Connecting the lab, down to the pipette
Share X
To send an e-mail to multiple recipients, separate e-mail addresses with a comma, semicolon, or both.
Title: Newscripts
Author: Sarah Everts
Chemical & Engineering News will not share your email address with any other person or company.