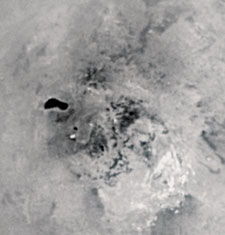 NASA's Cassini spacecraft has detected liquid ethane in a lake near the south pole of Saturn's giant moon Titan. Although there's been ample evidence that Titan's surface and atmosphere are impregnated with methane, ethane, and other hydrocarbons, this is the first time the chemical composition of one of its liquid lakes has been determined.

The Cassini spacecraft's visual and infrared spectrometer detected liquid ethane's characteristic signature in a kidney-shaped body roughly the size of Lake Ontario. The ethane is likely mixed with methane, other small hydrocarbons, and nitrogen, reports the team, led by Robert H. Brown at the University of Arizona, Tucson (Nature 2008, 454, 607).

In the four years that it's been mapping Saturn and its moons, Cassini has revealed that Titan is riddled with what appear to be lakes, seas, and streambeds. On Titan, where the temperatures hover around –180 °C, methane and ethane have been presumed to play the role that water plays on Earth, raining out of the atmosphere to feed the liquid bodies on the surface.

The new discovery sets the stage for comparative measurements of large lakes and seas in the northern hemisphere of Titan, notes Ralph D. Lorenz, a Cassini mission scientist at the Johns Hopkins Applied Physics Laboratory who did not coauthor the recent work. If, for example, the north and south lakes should have different compositions, "that would tell us about how volatiles are deposited on Titan," Lorenz says.