Probiotic yogurt:
[+]Enlarge
Credit: Shutterstock
Nothing to sneeze at. 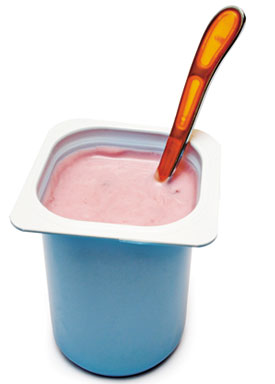 Credit: Shutterstock
Nothing to sneeze at.

Many people look forward to the arrival of spring. Those with hay fever, however, usually are not as happy to see the blooming flowers that herald ALLERGY SEASON and often seek relief from itchy eyes and runny noses by popping some Claritin or Allegra pills. But scientists at the Institute of Food Research (IFR), in England, now propose relief in the form of dairy products. The researchers report that probiotic bacteria in food and drinks reduce the body’s immune response to allergens such as pollen (Clin. Exp. Allergy 2008, 38, 1282).

Probiotic organisms have long been known to promote healthy digestion by helping naturally occurring bacteria in the gut to flourish and “bad” bacteria to, well, leave. That’s why food makers use different types of probiotics in popular products such as Dannon’s Activia yogurts.

According to Claudio Nicoletti, lead researcher for the IFR team, the probiotic he and his colleagues studied “significantly reduced the production of molecules associated with allergy.” The researchers conducted tests over a five-month period, giving a daily milk drink to volunteers with a history of hay fever. Half of the volunteers drank a placebo, and half imbibed a concoction containing the probiotic microbe Lactobacillus casei. The IFR team took blood samples from all study participants before grass pollen allergy season and then at its peak.

Although both groups started with similar levels of the antibody IgE in their systems, the probiotic drinkers presented less IgE compared with the placebo drinkers at pollen season’s peak. The body produces IgE in response to foreign pathogens, such as grass pollen, and the antibody stimulates the histamine response, which triggers runny noses and general malaise.

The IFR team monitored only antibodies and has yet to measure the probiotic’s effect on histamine-related clinical symptoms. So don’t toss those allergy pills just yet.

Besides, pollen may not be all that bad.

Another group of scientists in the U.K. is developing pollen-based “tags” as forensic tools in FIGHTING CRIME. According to the Engineering & Physical Sciences Research Council (EPSRC), a British funding agency, the pollen tags can be coated onto bullets during the manufacturing process. Apparently, pollen grains are sticky enough and have a shell that is hard enough to survive being fired from a gun.

Only 30 µm in diameter, the tags are invisible to the naked eye and will latch onto the gloves and hands of anyone handling coated bullets. They’re also extremely difficult to wash off completely, according to EPSRC.

To multiply the number of specific tags, the pollen grains can be given unique signatures by coating them with titanium oxide, zirconia, silica, or a mixture of other oxides, says Paul A. Sermon, the research team leader and a professor at the University of Surrey, in England. “The precise composition of this coating can be varied from one batch of cartridges to another,” establishing a connection between bullet and user, he says.

However, the number of unique tags may need to be increased for this technology to be transferred from the U.K. to the U.S. In 2006, there were about 390,000 crimes committed with firearms in the U.S., nearly 20 times the number that occurred in the U.K., according to statistics from the U.S. Department of Justice and the U.K. Home Office.

DNA evidence from fingerprints and skin cells is rarely retrieved successfully from fired bullets, so the scientists believe that this new technology could make a positive contribution to forensic investigations and help catch criminals “pollen handed.”

This week's column was written by Lauren Wolf. Please send comments and suggestions to newscripts@acs.org.