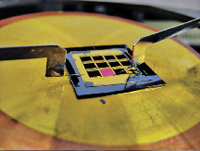 Department of Energy scientists claim a world record in solar-cell efficiency with a photovoltaic device that converts to electricity 40.8% of the concentrated sunlight it receives in tests. To reach this conversion efficiency, researchers at the National Renewable Energy Laboratory use a metamorphic triple-junction solar cell made from a composite of gallium indium phosphide and gallium indium arsenide to split the solar spectrum into three equal parts to be absorbed by each of the cell’s three junctions, according to lab officials. Metamorphic junctions are semiconductors with mismatched lattices—their atoms don’t line up—allowing for greater conversion of sunlight, the lab notes. The high-level efficiency was measured under the concentrated light of 326 “suns,” a sun being the light typically reaching Earth on a sunny day. The device is thin and light, and applications include space satellites and terrestrial photovoltaic arrays, which rely on lenses or mirrors to focus sunlight.