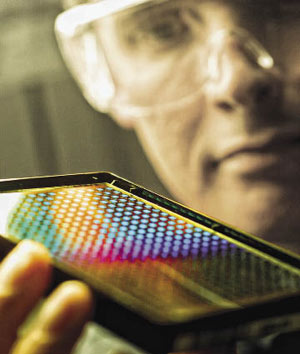 AS THE CHEMICAL industry confronts the crisis now gripping world financial markets, glass and ceramics maker Corning shows at least one way to survive: keep investing in R&D. Without a strong R&D pipeline, the once high-flying firm might not have made it to the ripe old age of 157, nor would Corning have been around to celebrate an R&D organization that is now 100 years old.

Seven years ago, Corning, with headquarters in the New York town from which it took its name, had a near-death experience when the telecommunications industry bubble burst. Demand for glass fiber-optic cable all but disappeared, and Corning's sales fell almost by half to $3.2 billion between 2001 and 2002. Losses went into the billions of dollars. Shares that had traded above $100 in the summer of 2000 plunged to around $2.00 in September 2002.

R&D could have been decimated and the firm might never have celebrated 100 years of organized industrial R&D as have other companies such as DuPont and General Electric. Joseph A. Miller Jr., Corning's executive vice president and chief technology officer, said he feared for the survival of the firm's research operations when he got a call in April 2002 to come talk to James R. Houghton. A member of the family that founded Corning, Houghton had retired as chairman and chief executive officer in 1996 but was about to return to the firm to lead it through troubled times.

Miller was a newcomer to Corning, having joined the firm only a year earlier after retiring as chief technology officer at chemical industry titan DuPont, after a 35-year career. While he thought at the time that Houghton might fire him, he also feared what might become of Corning's vaunted R&D group—an organization that had invented Pyrex scientific glassware and Corelle unbreakable dishes, pioneered mass production of cathode-ray tubes for televisions, and developed silicones and fiberglass. The latter two advances led to the silicone joint venture with Dow Chemical known as Dow Corning and the fiberglass joint venture with glassmaker Owens-Illinois known as Owens Corning.

But instead of firing Miller, Houghton told him: "We like what you are doing. We want you to stay."

At the same time, Houghton did instruct Miller to cut the R&D budget, but to do it carefully rather than with an across-the-board swipe. "If R&D goes, we don't have a future," Miller recalls Houghton telling him. The mandate to preserve R&D "was as as definitive a commitment to technology as I've ever gotten from any CEO," Miller says.

Miller set to work with his staff at Corning, carefully pruning and reorganizing the firm's R&D apparatus. "We spent every day for a year from six in the morning to six or seven at night working on a new framework for R&D," says Miller, who had to slash the firm's R&D budget from a high of $622 million in 2001 to $344 million in 2003.

Overall, the corporation laid off about 20,000 workers after the telecommunications bubble burst. It closed down or mothballed four of five fiber-optics plants worldwide and a photonics plant that made devices such as fiber-optic amplifiers.

Much of the R&D cutting occurred at Sullivan Park, the firm's 1.5 million-sq-ft central research installation situated on a 300-acre tract 3 miles from Corning. In the boom year of 2000, the firm had completed a $300 million R&D expansion. Now Miller was forced to shut down two of its new buildings.

The firm pared back its facility in St. Petersburg, Russia, eliminating traditional laboratory research and focusing on computer modeling and simulation. Corning also focused research at the European Technology Center, in Avon, France, to a few specialty areas, such as developing drug discovery tools and diesel engine particulate emissions filters.

Miller says the firm's R&D group reverted to its strengths in glass and ceramics materials. He and his colleagues "downsized" the organization and further centralized R&D at the Sullivan labs.

The focus of research efforts changed, too. "We went from about 70% optical communications research to about 70% materials research," Miller says. Using the new criteria, the R&D management group looked at each and every research program in its portfolio and decided which ones would live and which would die.

It couldn't have been a pretty process, but it was effective. Fortunately, Corning researchers had been working on liquid-crystal display (LCD) glass technology just as the market for flat screens was taking off, first for laptop computers and more recently for large-screen monitors and televisions. Corning's sales haven't quite recovered to their high of $6.9 billion in 2000, but they came in at $5.9 billion for 2007, up 90% from the 2003 low of $3.1 billion.

Today, the two buildings that were closed at Sullivan Park are beehives of activity again. An additional $300 million, 150,000-sq-ft expansion is under way and slated for completion in 2013.

Corning watchers are impressed. "I think it was fortuitous that LCD glass was ramping up just when they needed it," says Buckingham Research stock analyst John Roberts. He also expresses admiration for a company that maintained its commitment to R&D during rough times. "There wasn't any spurt in R&D in 2001 and 2002 that set the firm on the road to recovery in 2003." But he credits Corning with having maintained a strong commitment to R&D through hard times.

In 2007, Corning's R&D budget reached $565 million or an impressive 10% of sales. Roberts points out that Corning's sales figure doesn't include certain joint ventures such as Samsung Corning Precision Glass, which makes LCD glass. Include them, he argues, and Corning's R&D spending is closer to 5% of sales. Still, even that rate of investment puts Corning well above the average 2.5% or so for the chemical industry.

"We spent every day for a year from six in the morning to six or seven at night working on a new framework for R&D."

Corning takes a two-pronged approach to R&D. In 2007, two-thirds of the firm's R&D budget was devoted to developing and supporting existing businesses. One-third, or about $200 million, supported development of brand-new businesses in hopes of creating, each decade, two to four new businesses with annual sales of at least $500 million.

The firm supports these developments through a centralized R&D process with Sullivan Park—named for Eugene Sullivan, a chemist who joined Corning in 1908 to take charge of a nascent R&D organization—at its center. Scientists who work in France or Russia make frequent visits to Sullivan Park, as do a handful of scientists based near customers in Japan, Taiwan, India, and California's Silicon Valley.

Corning tries to provide customers with what Miller describes as a "keystone component in a customer system." Examples are a new generation of bendable optical fibers, which bring high-definition cable television and Internet communications into homes, and cellular ceramics, the durable substrates that make possible long-lasting automotive catalytic converters.

To develop those keystone components, Corning has assembled a large community of chemists, chemical engineers, physicists, material scientists, electrical engineers, patent experts, and new business development mavens who mostly work out of Sullivan Park. According to Miller, integrating the efforts of so many experts can best be done when they work in close proximity.

An additional benefit of such centralization is the ability to quickly form teams to exploit new research opportunities or react to an uncertain economic environment. "Being able to deal with a flexible critical mass is so important in responding to current needs," Miller explains.

Corning's melding of multiple disciplines at one location goes back many years, according to David L. Morse, director of corporate research, who came to the Sullivan labs after receiving a Ph.D. in chemistry from Massachusetts Institute of Technology in 1976. For instance, Corning has adapted expertise in extruding ceramic honeycomb substrates for catalytic converters, introduced in 1972, to a new business based on extruded carbon filters that capture harmful mercury from the smoke stacks of coal-burning power plants.

To govern the process of new business development, Miller chairs a corporate technology council. Businesses that meet development milestones and survive come under the aegis of a growth and strategy council headed by Corning CEO Wendell P. Weeks. That group, of which Miller is also a member, picks projects to move on to commercialization.

One that moved on last year was the Epic high-throughput drug discovery system. Photonics experts who stayed with Corning after the telecom bubble burst worked with the firm's life sciences and surface materials experts to develop the label-free optical biosensor technology, which can screen 40,000 compounds a day for biological activity.

Senior managers at Corning realize that R&D is both the foundation of the firm and its future, Miller contends. New businesses such as Epic are possible only because, back in the dark days of 2002, Miller was asked to reshape R&D at Corning with a scalpel rather than make across-the-board cuts. With a variety of new businesses percolating along in its laboratories, Corning's R&D organization, Miller says, can now see its way clear to another 100 years of technology advances.

Polymers
3M takes a wrap on innovative thinking
Business
DuPont takes a crack at running a chemistry incubator
Business
PPG counts on chemistry to give it an edge
Share X
To send an e-mail to multiple recipients, separate e-mail addresses with a comma, semicolon, or both.
Title: Invigorating R&D
Author: Marc S. Reisch
Chemical & Engineering News will not share your email address with any other person or company.