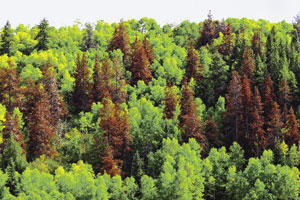 WILLIAM J. MURRAY says he has a difficult time convincing people standing next to a giant pine tree with beautiful green needles that the tree is actually dead. That's because although tiny mountain pine beetles can essentially kill the tree in only six weeks, it takes a year for the tree's needles to turn sickly rust red, says Murray, the scientific director for the Colorado-based nonprofit For the Forest.

Colorado is among the hardest hit areas in what entomologists are calling one of the largest insect infestations in North America's recorded history. Stretching from British Columbia to as far south as New Mexico, millions of acres worth of pine trees have been killed by mountain pine beetles (Dendroctonus ponderosae) over the past few years. The trees' deaths pose ecological, social, and economic challenges. The threat of fire ranks among the biggest concerns, particularly as the rice-grain-sized beetles migrate from trees in sparsely populated higher altitudes to forests surrounding residential neighborhoods.

This species of bark beetle is native to Western North America and infests trees as part of a natural cycle. Entomologists and chemical ecologists say several factors have contributed to the insect's recent population boom, including a 10-year drought that weakened the pines' natural defenses and winters warm enough that more of the beetle larvae can now survive. In areas where mountain pine beetle numbers equate to an epidemic, many trees are already dead. Simply removing the beetle-riddled arboreal carcasses is one of the only remaining options for controlling the epidemic, scientists say. Meanwhile, researchers are studying how the combination of other forestry management techniques and chemical tools may help save remaining trees from massacre by beetles. 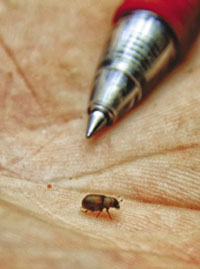 Credit: William Murray/For The Forest
Mountain pine beetles, such as this immature one, target lodgepole pines.

BARK BEETLES inhabit various tree species throughout the continent, but the most devastating infestations have been by the mountain pine beetle. Its primary host is the lodgepole pine tree.

The beetles bore into the tree to mate, and they deposit eggs in the phloem, the thin layer of vascular tissue in the bark that separates it from the wood. When mountain pine beetle populations are low, healthy trees can often stop their attacks, says Kimberly F. Wallin, an entomologist at the University of Vermont. The tree's first line of defense is to "pitch out" the insect by drowning it in sap. If that tactic proves unsuccessful, the tree may then produce high levels of monoterpenes that may kill maturing beetle larvae.

Wallin says the tree succumbs when the number of beetles attacking it overwhelms its defenses. If enough mountain pine beetles burrow into the phloem, together they can starve or dehydrate the pine tree. The beetles destroy vascular tubes that move water and nutrients through the tree. And along with their eggs, they deposit an ascomycete fungus. The fungus blocks the remaining tubes, killing the tree and leaving a telltale blue stain in the wood.

When the beetle population explodes, scientists can do little as whole forests succumb, says Steven J. Seybold, a chemical ecologist with the U.S. Department of Agriculture Forest Service's Pacific Southwest Research Station, in Davis, Calif. "The trick," he says, "is to prevent the beetles from starting in the first place." He says that prevention usually entails forward-looking forestry methods such as diversifying tree species, monitoring beetle populations, and thinning forests in advance of an outbreak. Chemical protection and control methods using pheromones and insecticides can be expensive, but may be successful at saving a few trees when beetle populations are low, he adds.

The beetles generate pheromones to communicate with each other. For example, they produce a repellent pheromone called verbenone, which is a monoterpenoid. This compound signals to other beetles that the tree is full. "Go find another tree" is the message. (This pine-wintergreen-scented chemical is also found in rosemary oil and is used by the flavor and fragrance industry.)

Verbenone is synthesized by oxidizing α-pinene, and it is registered for use as an insecticide in the U.S. and Canada, although it only repels the insects rather than kill them. A 5-inch pouch containing 7.5 g of the volatile pheromone lasts about three months, and a few pouches might be needed to protect a single tree, depending on the tree's size, Wakarchuk says. Each pouch costs about $10, so this method could, for example, prevent infestation in small acreages of high-value trees located near a home, campground, or resort, but the method is not cost-effective for the lumber industry, he says. He acknowledges that verbenone treatments become ineffective once beetle populations reach epidemic proportions in an area.

Blends of chemical messengers called semiochemicals show promise for deterring other bark beetle species from taking up residence in their preferred host trees. In Alaska, Seybold is working with colleagues to field test semiochemical cocktails that include verbenone. These mixtures not only convince northern spruce engraver beetles that a spruce tree is full, but they also mask the tree's true identity. They, in effect, make a spruce tree smell to spruce beetles like another kind of tree, one that the insects have no interest in attacking.

Like pheromones, insecticide treatments are a prophylactic measure for protecting high-value trees from invasive beetles. However, spraying insecticides can be expensive and labor intensive, can wreak environmental havoc, and may be effective for only one growing season. Active ingredients such as carboryl, bifenthrin, or permethrin must be applied to the entire exterior of a 100-foot tree. And entomologists point out that the powerful insecticides also kill beneficial insects, put animals that eat bugs at risk, and can be a danger to people in the forest.

ENTOMOLOGISTS are a little more optimistic about using injectable, systemic insecticides than using sprays. Insecticides applied to the surface of trees can kill adult beetles flying to and landing on the tree, but they don't affect the beetle larvae under the bark. Injecting an insecticide into the tree could reach the larvae and eliminate many of the environmental exposure problems inherent to spraying, says Donald M. Grosman, an entomologist with the Texas Forest Service.

Grosman and his colleagues have tested injection methods with formulations containing commercially available active ingredients, including abamectin, emamectin benzoate, fipronil, imidacloprid, and nemadectin. Preliminary results from a recent field test in Colorado indicate that emamectin benzoate may protect lodgepole pines from mountain pine beetles, provided the insecticide is injected into the trees several months before the beetles attack in the late summer so that the insecticide has enough time to circulate through the tree.

But killing the adult beetles and their larvae may not even be enough to keep the tree alive, Grosman says. Before the beetles die, they can introduce blue-stain fungus into the tree's phloem. A tree that had been infested with many beetles, therefore, can still succumb to the fungus even after the beetles are dead. No fungicide treatments are registered to battle the fungus, but Grosman says the injection treatment could be modified to include a fungicide component.

"The method of application is probably as critical as the choice of an active ingredient itself," says David L. Cox, an entomologist at Syngenta, which makes emamectin benzoate. He has worked with Grosman and other collaborators to develop a safe and effective product for tree injection, emphasizing that chemical solutions are just one tool in the forest management toolbox. "We cannot use one individual tool alone and be successful" in fighting bark beetles, he says.

Although new preventative chemical methods can't do anything for the large swaths of green-needled lodgepole pines now turning red in the West, research may yield more tools in time to help entomologists and foresters control the worrisome emerald ash borer, an invasive species of beetle that has started to devour its way through ash trees in the eastern U.S. and Canada.