Nanochannels that form in biomolecular crystals may be useful for separating, purifying, and storing CH4, H2, and CO2

[+]Enlarge
Credit: Piero Sozzani
A channel in a dipeptide crystal of alanine and valine has room to store methane (center, blue and white). 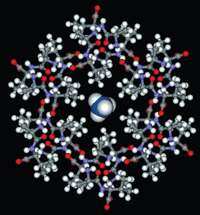 Credit: Piero Sozzani
A channel in a dipeptide crystal of alanine and valine has room to store methane (center, blue and white).

Nanochannels that form in biomolecular crystals may be useful for separating, purifying, and storing gases such as methane, hydrogen, and carbon dioxide under mild conditions, according to Piero Sozzani and colleagues at the University of Milano Bicocca, in Italy (Chem. Commun., DOI: 10.1039/b820200a). Researchers have proposed numerous porous materials for gas storage, but many of these materials require unfavorable synthesis conditions, contain heavy-metal ions, or are not biodegradable. Sozzani and coworkers prepared four dipeptides that crystallize with chiral channels suitable for encapsulating gases. A network of hydrogen bonds holds the peptides together, creating the permanent channels with hydrophobic internal surfaces. The researchers found that the channels in a dipeptide crystal composed of isoleucine and valine, for example, can hold as many moles of CH4 as H2 and selectively absorbs CO2 over CH4. They further noted that some of the dipeptides tested had better capacity for CH4 than other porous materials such as zeolites and certain metal-organic frameworks. With the variety of peptides that are available, the nanochannels could be customized to fit specific gases, Sozzani says.

Pollution
Air pollution hurts honeybees
Pollution
Satellites can now see air pollution inequality within cities
Greenhouse Gases
One carbon capture project stalls as another advances
Share X
To send an e-mail to multiple recipients, separate e-mail addresses with a comma, semicolon, or both.
Title: Dipeptide Crystals For Gas Storage
Author: Rachel A. Petkewich
Chemical & Engineering News will not share your email address with any other person or company.