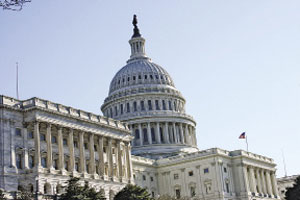 ELECTION YEARS especially presidential election years, are not the best time for making progress on vital national legislation. Still, over the past year, the 110th Congress worked on a lot of bills relevant to the chemical enterprise—it just didn't actually pass many.

Congress did not even pass most of the legislation required to fund the federal government. Only three of the 11 appropriations bills introduced were passed, leaving the agencies that fund most of the nation's basic research without a budget for fiscal 2009. Only the Departments of Defense, Veterans Affairs, and Homeland Security have approved budgets for 2009. Instead, the omnibus spending bill approved by Congress at the end of the fiscal year in September carried fiscal 2008 spending levels through March 2009. This means that when Congress receives the fiscal 2010 budget request from the new president in February, it will have yet to pass most of the 2009 budget.

The energy crisis did not result in much meaningful legislation this year either.

Congress allowed its 26-year-old ban on drilling for natural gas and oil on the U.S. outer continental shelf to expire but only because public sentiment seemed to strongly favor more drilling. Also, at the last minute, Congress renewed nearly $17 billion in tax credits for electric power that is generated by wind, solar, and other renewable energy sources. These tax credits have been around for many years and were going to expire on Dec. 31.

Action on mitigating global climate change made almost no progress in Congress in 2008. The Senate managed to push a bill to the floor for debate, but it was blocked by procedural disputes and was never voted on. The bill would have set a national cap on greenhouse gas emissions and would have created a market-based trading program for companies to meet the cap. In the House, Rep. John D. Dingell (D-Mich.), chairman of the Committee on Energy & Commerce, never wanted to consider a climate-change bill, but he reluctantly held hearings on the issue and released a draft bill late in the session. Both House and Senate leaders say they were trying to set up the debate for the next Congress.

Reform of the U.S. patent system was also on legislators' calendars this year. In September, the House passed a bill to upgrade the quality of patent examinations and curb speculative patent infringement lawsuits. The Senate, however, couldn't agree on several key provisions, and the bill died. But there is consensus in Congress that change in the system is needed, and the patent reform effort will undoubtedly be revived next year.

A similar story applies to asbestos legislation. The Senate approved a bill in October that would effectively ban all use of asbestos. The legislation would prohibit importation, processing, manufacturing, or distribution of any asbestos-containing materials in the U.S. Some exemptions of uses by DOD and the National Aeronautics & Space Administration would be allowed. The House, however, was caught up trying to resolve the financial crisis by then and did not take up the asbestos bill.

Congress did pass a law that halts all U.S. exports of mercury. The law resulted from concerns that excess commercial mercury going to developing nations for use in marginal gold mining operations was polluting waterways. Beginning in 2013, all excess mercury will be kept in a long-term storage facility operated by the Department of Energy.

The societal impact of a number of chemicals was also of great interest to Congress this past year. For example, legislators managed to pass a law to revitalize the Consumer Product Safety Commission. In addition to giving the agency more money, more staff, and improved laboratory facilities, the law banned the use of three specific phthalates in children's products and called for more research on the health effects of three others. The new law also sets a lower level standard for the amount of lead allowed in toys and requires the agency to establish an online database where the public can report injuries or risks from consumer products.

ANOTHER COMPOUND receiving congressional attention was bisphenol A (BPA). This industrial chemical, used to make polycarbonate plastic and other materials, was increasingly the subject of reports that exposure to it may cause birth defects and developmental harm to infants. Hearings were held by the House Committee on Energy & Commerce on the lack of action by the Food & Drug Administration to regulate BPA, and a bill was introduced in the Senate that would ban the use of the compound in any product used by children. In the end, nothing was finalized, but the next Congress is sure to revisit the topic.

In fact, comprehensive legislation to totally overhaul the way chemicals are regulated was introduced in both the House and Senate in 2008, although it never went anywhere. These bills are patterned after the European Union's Registration, Evaluation, Authorization & Restriction of Chemical Substances (REACH) regulatory scheme put into action this year. Basically, the U.S. legislation would require that chemicals in products be shown to meet "an applicable safety standard," or their use would be restricted or banned. That standard is defined as "a reasonable certainty of no harm," a tough standard to certify.

With a new Congress controlled by the Democrats coming into Washington, D.C., next year, more regulation of chemicals—along with climate change and chemical plant security—is sure to be on the short list of legislative priorities. And, who knows, some of these priorities may even become law.