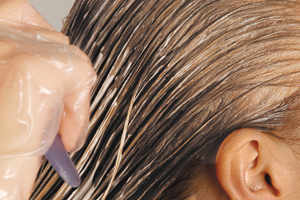 IT IS AN EVENT women tend to remember. For me, it happened on a recent Sunday afternoon over an otherwise pleasant brunch with my best friend. Out of nowhere, she reached across the table and gleefully plucked a long, silvery strand from my head. It was that dreaded first gray hair.

Of course, my initial reaction to her discovery was to figure out how to hide it. Lucky for me, Procter & Gamble says it can make that step easier. The consumer products giant just unveiled the first major innovation in hair coloring chemistry in more than half a century, a new process that promises to return my hair to its original state in just 10 minutes without all the damage and drying caused by conventional hair dye.

And while I'm not reaching for the dye just yet (I'm willing that first strand to be a fluke), doing so seems to be an inevitable rite of passage. According to P&G, roughly two-thirds of all American women will color their hair either at home or in a salon at some point in their lives. The market research firm Kline & Co. estimates the U.S. hair color market at about $2 billion per year at the manufacturer's level.

Given the scads of home hair dye kits populating the shelves at the local drugstore, it would seem safe to assume that different brands employ different science. And there has been a lot of incremental innovation around colors that get consumers as close to, or as far away from, their original hue as they desire. Furthermore, new delivery systems enable the color to latch onto the hair better and for longer times, while conditioners help offset the harsh effects of hair dye chemicals.

But the basic chemistry of the dyeing process hasn't changed since the 1950s. A box of permanent hair dye is essentially nothing more than hydrogen peroxide, ammonia, dye precursors, and a surfactant. Mixing the peroxide and ammonia creates two reactive species—the perhydroxyl anion (HOO-) and the HO• radical—that raise the dye solution pH to somewhere between 10 and 11. The alkalinity causes the hair fiber to swell and allows the dye precursors to penetrate.

The perhydroxyl anion then reacts with melanin pigment in the hair, lightens it, and simultaneously oxidizes the dye precursors, causing them to link and form the final color. The surfactant holds it all together, keeping the ammonia and dye precursors soluble in the peroxide, and provides some heft to keep the chemicals stuck to the hair while the process is under way.

Yet with a dye solution pH of 10 or 11, the coloring process is an exercise in brute force. The hair is inevitably damaged during the 30 minutes it takes for the dye to set—and then there's the issue of the strong ammonia odor. What's more, because of the toll it takes on the hair, dye should be applied only every four to six weeks.

THE HOME HAIR color market is growing at a modest 0.6% per year, in large part because consumers—graying baby boomers in particular—have been turned off by the damaging effects of coloring, according to Carrie M. Mellage, director of Kline's consumer products practice. She believes an innovation in the hair coloring arena could help companies regain the attention of women who have decided to "gray out."

Consumers would "rather have something that's more like a beauty procedure than a chemistry lesson," agrees Frauke Neuser, principal color scientist at P&G Beauty. "They want something that will keep their hair healthy and under good condition."

P&G began looking into the problem in 1999, two years prior to acquiring Clairol and Wella, companies that brought P&G both hair color lines and a wealth of research expertise. P&G scientists' first approach was to focus on lowering the pH of the product to reduce damage to the hair. But the system they came up with couldn't lighten the hair enough to produce the desired color, Neuser says, and the strategy was jettisoned.

A fresh perspective from scientists in P&G's laundry and home care group, however, helped push the science forward. Though experts in removing tomato stains might not seem like the right people to solve a hair dye problem, the fundamental chemistry in both fields is similar. "We're bleaching out melanin, they're bleaching out stains," says Jennifer Marsh, principal scientist in P&G's beauty science division.

The researchers switched their focus to eliminating the HO• radical, a by-product of the reaction between hydrogen peroxide and metal ions. Because of the radical's knack for damaging hair, the chemists thought getting rid of it would improve the performance of the product without sacrificing color.

"They came at it from a very different point of view," Marsh says. "When you talk to laundry people, the first thing they tell you is you need to control the radical chemistry." The free-radical approach worked. Nearly 10 years after the project began, P&G has devised a new hair dye chemistry system. The product was launched last month in select markets as Nice & Easy's Perfect 10, named for the short time it takes to set.

The new system uses ammonium carbonate, hydrogen peroxide, and the amino acid sodium glycinate, all of which react to form a different pair of reactive species: a peroxymonocarbonate ion (HCO4-) and a carbonate radical (CO3-). Though some ammonia is still formed in the process, the peroxymonocarbonate ion permits the bleaching and coloring to occur at pH 9, causing less damage to the hair. The hair is further protected by the addition of sodium glycinate, a radical scavenger that removes carbonate radicals as they're formed.

THE INITIAL product launch includes 15 shades, a range that limits the line to home coloring, since salons expect the systems they buy to offer a palette of up to 200 shades. P&G plans to slowly bulk up the line, though the scientists say creating new colors has turned out to be more challenging than anticipated.

"We learned the hard way how to compose colors and shades," Neuser says. She notes that creating a new shade under standard hair dyeing chemistry—say a blond that is between two existing shades—usually involves about four to six iterations in the lab. P&G went through around 10,000 shade iterations to get just the 15 colors in the new product line. "The whole chemistry is different," Neuser says.

With the initial shades in place, the learning curve is more easily navigated. "We're now starting to understand the mechanisms of why we're getting a certain color," Marsh adds. "It's not just by chance anymore."

P&G expects to launch an additional five to 10 hues in the next 12 months. The company has been successful at the blond end of the spectrum but has had some difficulty with color uptake on red shades, which are historically problematic because the small color molecules tend to fade rapidly and are easily broken down in the sun.

P&G is now working on the next generation of the technology while also starting to apply it to its other hair color brands and determining how to bring it into the salon business, Marsh notes. "We see the technology as a completely new platform for hair color," she says. "It will be big, and it will show the industry how we do hair color."

As for me, if genetics is any predictor, P&G has about 10 to 15 years to master a brunette shade with auburn highlights. I'm more than happy to provide samples, if needed.

Art & Artifacts
Conservators consult Forbes Pigment Collection to solve artwork mysteries
Business
How encapsulation is taking root in the laundry room
Water
What are pool chemicals, and how do they protect swimmers?
Share X
To send an e-mail to multiple recipients, separate e-mail addresses with a comma, semicolon, or both.
Title: Color Challenge
Author: Lisa M. Jarvis
Chemical & Engineering News will not share your email address with any other person or company.