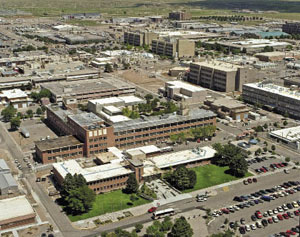 IN A SPEECH to the nation's nuclear weapons scientists earlier this month, Energy Secretary Steven Chu laid out his vision for the work done by the three nuclear weapons laboratories. This trio—Lawrence Livermore, Los Alamos, and Sandia National Laboratories—should expand their research and development efforts both in nuclear weapons and nonweapons work, he said.

Specifically, Chu called on the labs to do more R&D related to national energy security, which would more closely tie into the work being done at the Department of Energy's nonweapons Office of Science labs and office-supported universities. This push for more nonweapons work is not new—the three labs have been plodding down such a path for years with mixed reviews—but now some policymakers are questioning whether the weapons facilities should be moved under the direction of the Department of Defense, a move Chu does not support. He did not address the labs' long-stated desire to build a new nuclear weapon, the "reliable replacement warhead" (C&EN, Nov. 19, 2007, page 12).

Tension has been brewing between the 23,000 staff working at the labs and DOE leadership in charting a new direction for the $9 billion nuclear weapons operation to nurse the facilities away from heavy dependence on nuclear weapons. Since 2006, Los Alamos and Livermore have laid off about 2,000 staff each; Sandia has been less affected, with staff reductions of about 500 (C&EN, June 30, 2008, page 30).

The speech was part of Chu's first visit to the weapons labs as energy secretary. A day after touring Los Alamos, Chu made his pitch at nearby Sandia in an hour-plus presentation titled "The Role of the Nuclear Security Laboratories in Meeting National Challenges." The speech was webcast to the Los Alamos and Lawrence Livermore Labs.

Peppered with slides, graphs, and historic photos, Chu's presentation looked more like a science-class lecture by a visiting Nobel Laureate, which he is, than the policy-heavy fare that is usually delivered by top DOE headquarters officials when they go into the field. The address mostly focused on data affirming the existence and projecting the future impact of global climate change, as well as research opportunities for weapons scientists in the search for technologies to cut carbon dioxide emissions.

Chu made clear, however, that he wants the labs to continue their science-based nuclear weapons-related work. He underscored the labs' role in nuclear weapons nonproliferation activities. The labs, he stressed, are important in providing science and technology support for President Barack Obama's recently stated goals of negotiating to reduce the size of U.S. and Russian nuclear weapons stockpiles, toughening the international Nuclear Non-proliferation Treaty, and signing the Comprehensive Nuclear Test Ban Treaty.

The labs also help ensure that the stockpile of U.S. weapons remains viable. This important role must also be maintained, Chu noted.

"This is a deep technical issue," Chu said. "In order to ensure that we have a safe, secure, and reliable nuclear stockpile without testing, it is important that the scientific talent and scientific infrastructure of these nuclear security labs is maintained. This is something that if we don't have, we may be forced into the position of resuming weapons testing. For this reason, we should pay attention to make sure we preserve this incredible asset."

While at Los Alamos and Sandia, Chu also stressed his desire to keep the three weapons labs within DOE.

The White House Office of Management & Budget has called for an analysis of the cost and benefits of transferring the labs and other nuclear weapons activities from DOE to DOD beginning in 2011. The review is to be led by the two departments with input from an alphabet soup of federal agencies. The final report is due by Sept. 30, at which point it will be assessed by the National Security Council and OMB, according to OMB documents obtained by C&EN.

Chu made clear he wants the labs to continue their science-based weapons work.

"I don't think it is a good idea" to move control of the labs, Chu told reporters after his Sandia speech. "What is really vital for the health of the laboratories and the health of country is that the national security needs of the country be integrated by a very strong science foundation."

For nonweapons energy work, Chu noted that the intellectual assets of the weapons lab scientists, particularly their computational capacities, should be exploited. He particularly pointed to lab scientists' work in computer simulation that is already taking place.

Chu gave the example of Los Alamos' computer simulations of ocean-atmosphere interactions to aid climate-change predictions and the lab's supercomputer-based projections of polar ice cap melting. He also singled out computer-based design work done by the labs to optimize performance and manufacturing of a diesel internal combustion engine, which resulted in a more efficiently operating diesel engine. Computer use resulted in a 10–15% reduction in development time and avoided the need to manufacture engine prototypes.

Computer-aided design is only going to become more important, Chu said. "This is the new way of building things, and certainly we want to be the leaders of this new high-technology industry," he added.

Chu wove his emphasis on computer simulations into a lengthy Al Gore-like slide presentation on global warming, emphasizing the labs' potential role in finding technologies to avoid the worst impacts of climate change and comparing Earth to the Titanic heading for an iceberg.

THE TECHNOLOGIES Chu identified in particular were biofuels, advanced batteries, and energy-efficient buildings. He urged weapons lab scientists to search for new "transformational technologies" in the energy sector that would be comparable to the sweeping nonenergy technologies—such as transistors, integrated circuits, and ammonia-based agricultural fertilizers—that transformed the world in the past. Using the example of advanced batteries, Chu urged the U.S. to "reclaim its lead in high-technology industries."

He closed his speech by projecting a picture taken by the Apollo 8 astronauts on Christmas Eve in 1968. "It shows a very bleak lunar landscape and a very beautiful Earth that is now in danger. The take-home message is that there is really no other place to go," Chu said.

His speech closed to polite applause. Chu took no questions from the scientists attending, and Sandia Director Thomas Hunter briefly told Chu and the audience: "It has been a pleasure for us to be with you today, and as you can see from his remarks, the future for these institutions and for this country and planet will rely a lot on what we can do and what we will do."