[+]Enlarge
Credit: Shutterstock
Heparin is often administered to patients through dialysis machines like this one. 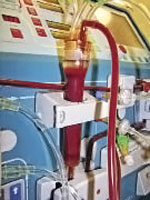 Credit: Shutterstock
Heparin is often administered to patients through dialysis machines like this one.

FDA HAS SENT warning letters to two Chinese suppliers of the blood thinner heparin, citing them for failure to follow drug manufacturing practices. The letters continue FDA's response to contaminated Chinese-made heparin, which was linked last year to the deaths of at least 80 U.S. patients.

One letter went to Shanghai No. 1 Biochemical & Pharmaceutical. It had been shipping heparin to California-based International Medication Systems, FDA notes, although "no drug products made with these lots have been marketed in the U.S." Shanghai No. 1 had assured FDA that it made the heparin, but FDA inspectors auditing the firm last August found that it had in fact been secretly buying the material from two outside suppliers.

FDA issued its second warning letter to one of the two manufacturers that had supplied Shanghai No. 1; the other no longer produces the substance. The agency found that at least 19 lots of heparin produced by Qingdao Jiulong Biopharmaceuticals were contaminated with oversulfated chondroitin sulfate, a substance implicated in the U.S. deaths. However, most of the affected patients received heparin made in China by a third firm, Scientific Protein Laboratories. FDA issued a warning letter to this company in April 2008.

FDA says Jiulong failed to investigate how the contamination occurred and still has not implemented suitable quality assurance systems. The agency also discovered that the firm was shipping heparin to the U.S. without regulatory approval.

Peter Saxon, a New Jersey-based consultant who has prepared Chinese drug firms for FDA inspections, believes that the agency effectively banned the products of Shanghai No. 1 and Jiulong from the U.S. after the audit last August, even if the official warning letters are more recent. Starting in August, Saxon notes, "the two firms were given the opportunity to perform self-investigations, hire an outside auditor, and thoroughly answer the FDA observations." They evidently did none of that, he says.