Bidding Adieu To An Old Friend 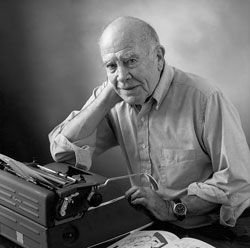 Longtime readers of Newscripts likely remember the not-so-long-ago days when the column was written solely by KENNETH M. REESE. Sadly, Ken passed away on March 3 at the age of 85.

Ken had a long history with C&EN, first joining the Chicago office in 1954. He eventually made his way to ACS headquarters, in Washington, D.C., in 1962, when he assumed the role of the magazine's managing editor. Five years later, Ken stepped down from the weekly managing editor's grind and took on one of the best jobs at C&EN—Newscripts editor.

Newscripts began as a sort of chemistry poetry corner and eventually morphed into a collection of news items that didn't quite fit anywhere else in the magazine. The column matured and flourished under Ken's typewriter. "The editorial policy, if any," he wrote on the occasion of the column's 50th anniversary, "favors the chemical over the nonchemical, the scientific over the nonscientific, the grotesque over the normal" (July 12, 1993, page 30). "In response to social trends and irate readers," Ken wrote in a "Best of Newscripts" piece, topics and tone evolved "subtly over the years" (Jan. 12, 1998, page 222).

Ken, although not the originator of the feature, was a careful curator of the Department of Obscure Information, informing readers over the years that

• The aluminum ore bauxite is named after the village of Les Baux near Marseille (Dec. 4, 2000).

It is hard to imagine today how Ken managed to compile all this useful information without the aid of the Internet. (Ken never embraced the computer; he always wrote his columns in longhand, then turned in a typed copy that was rekeyed into a computer by a copy editor.)

A classic old-school journalist, Ken was known around the C&EN offices for his gravelly, nicotine-laden voice; for a gruff persona unfazed by looming deadlines; and for imbibing a cocktail or two during his lunch hour (or two). But beneath that rough exterior, points out current Editor-in-Chief Rudy Baum, Ken was a "kind, friendly, funny, and erudite person."

Not only did Ken have a brilliant sense of subject matter and wry humor to boot, he was also able to develop a terrific rapport with readers, who could frequently expect to see their contributions in the Flotsam and Jetsam recurring feature. And letters in response to an item would often end up as follow-up Newscripts items themselves. Take, for instance, the case of the microwave mishaps. The original item, about the urban legend of a microwaved cup of water exploding in a young man's face, ran on May 15, 2000. Replies from readers about the likelihood of such an incident ran in Oct. 23 and Dec. 4 columns of that year.

Then there was the slide rule, which, in Ken's words, seemed to "have a death grip on the recollections of people who have used them very much." In the Aug. 11, 2003, issue, Ken wrote an item entitled "Memories of the late slide rule," based on an article that had appeared in Discover magazine. Comments from slide-rule enthusiasts and calculator inventors led to four separate follow-up items that year, in the Sept. 1, Sept. 8, Oct. 6, and Nov. 17 columns.

Ken retired from Newscripts in September 2004. The column, as readers know, continues under the authorship of several C&EN staffers. As Ken stated—and with an apparent nod to Kurt Vonnegut's most famous line—at the end of his "Best of Newscripts" piece: "And so it goes."

Education
Alchemical Teas, ‘Song Of The Chemist’
Physical Chemistry
The Humanity Of Science
Education
Arsenic Sells, Molecules Tickle The Funny Bone
Share X
To send an e-mail to multiple recipients, separate e-mail addresses with a comma, semicolon, or both.
Title: Bidding Adieu To An Old Friend
Author: Rachel Sheremeta Pepling
Chemical & Engineering News will not share your email address with any other person or company.