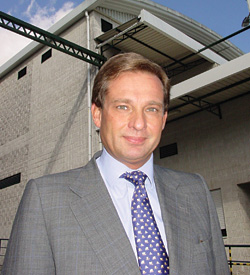 Spirits were high as Portugal-based executives from Hovione arrived in Cork, Ireland, in late April for the inauguration of the company's newly acquired pharmaceutical chemical facility. The acquisition, from Pfizer, closed on April 8, the same day as the company's 50th anniversary.

A week earlier, the firm reached another milestone, albeit one that got less fanfare. Its pharma division, which offers drug formulation services that leverage its particle-design capabilities, announced that Daiichi Sankyo intends to use Hovione's TwinCaps dry powder inhaler for an influenza drug under development.

The two-part plastic device has no moving parts to deaggregate the dose of powder and requires low inspiratory airflow to achieve optimal delivery to the lung, according to Hovione. The firm says the device will improve drug delivery for children and the elderly and could expedite treatment of large populations in the case of a pandemic.

Although a plastic inhalant device might seem like a quirky sideline for a medium-sized pharmaceutical chemical manufacturer such as Hovione, Peter Villax, vice president of Hovione's pharma division and eldest son of Hovione founder Ivan Villax, emphasizes that the product emerged from Hovione's drug particle design business.

"We started working on dry particle inhalers more than 10 years ago in order to increase the marketing opportunity for corticosteroids," Villax says. "It became a business in itself. We became experts in the field of inhaled-drug product development." According to Villax, his division also offers tableting and capsulation services to pharmaceutical chemical customers that are conducting clinical trials.

Although the pharma division represents only about 8% of Hovione's sales, it is the division with the highest profit margin, according to Villax, and is viewed as an important growth area. It is also an area of intense innovation, he says.

"In order to have a particle that can fly into your lung, you need a particle of a specific density, a specific size, and a certain morphology," Villax explains. "We have been able to achieve that with spray drying." With access to scientists in Hovione's particle-design division, the pharma division is able to formulate drug composites of a particular density and test them on simulation equipment at the firm's headquarters in Loures, Portugal.

Villax says his division will target the inhaler technology at bacterial and viral lung infections. "We believe the asthma market is well serviced by very large players," he says, noting that the company's first inhaler, licensed to Ranbaxy Laboratories, failed in the asthma market. "Lung infection will be the biggest area of growth by far in inhaled delivery for the next 10 years," he says. Large-molecule drug delivery is another frontier, he adds.

Villax sees a big opportunity for Hovione. "We will be able to deliver a lower dose directly to the site of infection without going through the bloodstream."

Industry consultant Peter Pollak agrees. "This has become an interesting niche for Hovione," he says.

The division has rented 40,000 sq ft of lab space at a science park in Lisbon and is moving 100 jobs from Loures. Innovation will stem from a partnership between pharmacists and chemical engineers within the company, Villax predicts. "There are companies where these two groups do not work well together," he says. "But we put together teams that work fantastically together."

Outsourcing
Thermo Fisher will acquire a GSK plant in Ireland
Business
FIS nabs nearby Zach System plant
Business
Patheon acquires a Roche facility
Share X
To send an e-mail to multiple recipients, separate e-mail addresses with a comma, semicolon, or both.
Title: A Well-Integrated Sideline
Author: Rick Mullin
Chemical & Engineering News will not share your email address with any other person or company.