IN THE LAB
[+]Enlarge
Credit: Blair Bellamy
Sangji was injured in a fire in the Molecular Sciences Building at UCLA. 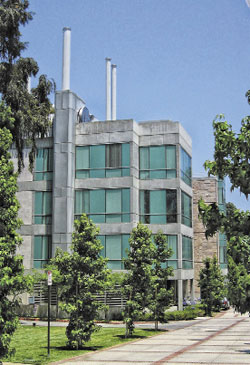 Credit: Blair Bellamy
Sangji was injured in a fire in the Molecular Sciences Building at UCLA.

The University of California, Los Angeles, has appealed findings of workplace safety violations issued by state regulators regarding the death of research assistant Sheharbano (Sheri) Sangji, who was burned in a laboratory fire there in December 2008.

Sangji’s family has also separately appealed the citations, which it believes are not substantial enough, says Naveen Sangji, Sheri’s sister.

The university said in May that it would not appeal either the findings of the California Division of Occupational Safety & Health (Cal/OSHA), the state agency charged with overseeing workplace safety, or the associated $31,875 fine (C&EN, May 11, page 7). But in a prepared statement released on June 8, Kevin Reed, UCLA’s vice chancellor for legal affairs, said the university’s appeal was necessary to ensure “that there was no citation or finding that can be used against the university in any future proceeding.” The university has already paid the fine in full, Reed says.

Sangji’s family and the union that represents laboratory workers at the university are asking Cal/OSHA to let them weigh in on the university’s appeal. If Cal/OSHA grants them third-party status, it would allow them to present additional information to the appeals board or make statements addressing issues relating to the case.

“Cal/OSHA has not agreed to any nonadmission clause nor have we had any discussions of settlement,” agency spokesman Dean Fryer says. The appeal process can take up to 10 months, he says.

One of Cal/OSHA’s findings was that UCLA had not corrected workplace safety violations identified by university environmental health and safety officers in October 2008. The university would also like Cal/OSHA’s records to indicate that many of the violations had been corrected before the fire but the corrections were not documented properly, UCLA’s Reed says.

One of the deficiencies noted in the October inspection was that lab personnel were not wearing appropriate personal protective equipment such as lab coats. In a May 4 statement, UCLA officials noted that “Cal/OSHA said the lack of a lab coat was the single most significant factor in the severity of the burns that led to Sangji’s death.”

As a staff research associate, Sangji was represented by the University Professional & Technical Employees union, says Lynn Kessler, a research associate in UCLA’s neurology department and member of the union’s Health & Safety Committee. The union disputes that UCLA has even now corrected the safety violations identified in the October inspection, Kessler says, noting that union representatives did a walk-through of labs in May and still found people not wearing lab coats.

Because union members are workers as Sangji was, “We’re the ones who really know what goes on in the labs,” Kessler says. For that reason, the union believes its input should be considered by the Cal/OSHA appeals board.

The union has also filed official grievances with the university, stating that UCLA continues to violate its contractual agreement to provide a healthy and safe workplace for lab workers. The union wants all lab work to be stopped until unsafe conditions in the labs are corrected, safety training is augmented, and documentation is improved.

Sangji’s parents, Shaukat and Maimoona Sangji, have appealed how Cal/OSHA categorized its citations against UCLA. Cal/OSHA labels citations as “regulatory,” which involves a violation that could cause injury, but there is no imminent hazard; “serious,” which is a situation that has a high probability of causing severe injury or death; “willful,” which is a serious situation that the employer either knew or should have known existed and did not abate; or “repeat.”

In Sangji’s case, a citation for lack of documentations of safety and health training was labeled as regulatory, while citations for not correcting the safety deficiencies identified in October, inadequate safety training, and lack of personal protective equipment were labeled as serious. Sangji’s parents believe that the classifications should be willful and repeat for all violations. Cal/OSHA regulations limit the penalty of a serious violation to $25,000, whereas the fine for a willful violation can be as much as $70,000. Although other news organizations have reported that Cal/OSHA has rejected the family’s appeal, as of C&EN press time, agency officials say they have not ruled on the matter.

Cal/OSHA rarely labels citations as willful, agency spokesman Fryer says. When it does so, it is typically because an employer has clearly taken no action to correct a problem. Because Sangji had a lab coat, although she was not wearing it at the time of the accident, and the university had taken steps to address lab safety deficiencies, the investigators categorized the violations as serious, Fryer says.

Cal/OSHA’s Bureau of Investigation is currently reviewing the case to determine whether to forward its findings to the Los Angeles district attorney’s office to evaluate whether criminal prosecution is warranted.

Sangji’s family has so far pursued no other legal action against the university but would very much like the district attorney to investigate the incident, Naveen Sangji says. The family thinks that the Cal/OSHA investigation has not been thorough enough, she says, and is concerned that the other agencies involved in the case—the UCLA police department and fire marshal’s office—are all on UCLA’s payroll. The family believes that UCLA is investigating itself “and not doing a good job of it. We think it’s time for the district attorney to step in and figure out what’s going on,” Naveen says. “We want to know who was responsible and who failed in their duties to make sure Sheri was safe at work.”

“UCLA has cooperated fully with multiple independent investigations conducted in the wake of the tragic accident and is confident in the independence and comprehensive nature of those reviews,” says Phil Hampton, a university spokesman.