VIDEOS
[+]Enlarge
The ACS Division of Organic Chemistry has posted videos that reveal the personalities of some its most famous practitioners. 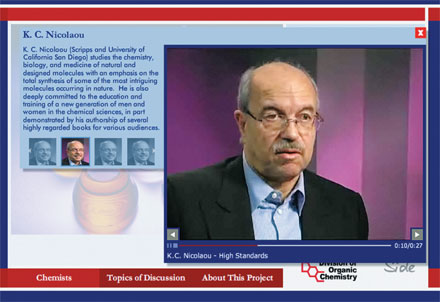 The ACS Division of Organic Chemistry has posted videos that reveal the personalities of some its most famous practitioners.

John D. Roberts, Madeleine Joullié, K. C. Nicolaou, and Peter Stang are eminent organic chemists with long lists of contributions to the field and innovators who have been recognized by numerous publications and awards. But who are they and their peers as human beings? To give insight into the personalities of organic chemistry’s giants, the ACS Division of Organic Chemistry, which celebrated its 100th anniversary in 2008, has embarked on a project to produce a series of video interviews, the first 10 of which are now online.

In the videos, the University of Richmond’s Jeffrey I. Seeman asks the well-known “organikers” questions not about molecules, but about themselves—questions that reveal the person behind the publications. For example, “What’s the best advice you’ve ever received?” “What does ‘excellence’ mean to you?” “How do you choose your projects?” and “What brings you the greatest joy?” In addition to revealing these scientists’ personal sides and contributing to the archives of the field, Seeman says another goal is “simply, to have fun. To enjoy and explore the range of values, breadth of experiences, and wonderful complexity of us as human beings.”

The videos can be seen by going to organicdivision.org and looking for the video announcement with the screen capture of Nicolaou. Seeman will be conducting another series of video interviews with eminent organic chemists at the upcoming ACS national meeting. These will be incorporated into the current website.

The division and an ACS Innovative Activity grant are supporting the series. Additional support comes from the Richmond, Va.-based media company GroundWorkDesign.