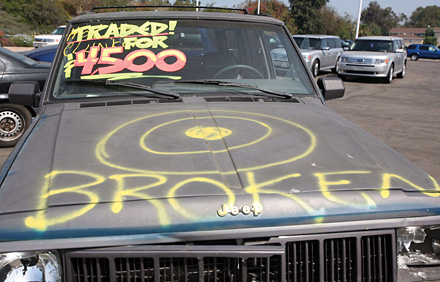 As legislation for the federal government's Cash-for-Clunkers program was being drafted, engineers at the National Highway Traffic Safety Administration's Vehicle Research & Test Center (VRTC) were conducting high-priority tests to identify the most efficient and safest method to kill hundreds of thousands of cars.

The $1 billion program, known officially as the Consumer Assistance to Recycle & Save Act of 2009 and more cutely as CARS, is designed to entice owners of gas guzzlers to replace them with new, more fuel-efficient cars that spew less carbon dioxide into the air. At the same time, the program stipulates that these older vehicles be permanently removed from the roads.

This is where the car killing comes in. And it's death by chemistry, on a massive and national scale.

It's a first for Dug Dugger, general manager of Ourisman Rockmont Chevrolet, in Rockville, Md. "I have never had to kill cars before," he tells C&EN, noting that many dealers now have temporary auto morgues on their lots, sometimes with the lifeless bodies of dozens of former gas guzzlers. At his dealership, a disposal company swings by to haul away the corpses, two-by-two, for shredding.

According to the 136-page "final rule" regarding implementation of the CARS program, VRTC tested four methods of vehicular execution. Three of them—running the engine without oil, drilling a hole in the engine block, and destroying the oil filter's threaded fastener—didn't make the cut. "All had significant problems related to their effectiveness, practical limitations based on vehicle variations, and/or safety risks for workers involved," the document reports.

The fourth technique, the one mandated by the traffic safety administration and now deployed by hundreds of car dealers around the U.S., is, according to the rule, "a quick, inexpensive, and environmentally safe process ... to disable the engine of a trade-in vehicle while in the dealer's possession."

The lethal engine poison is a solution of 40 % sodium silicate. The 40% specification refers to the weight ratio of Na2O to SiO2 in the general sodium silicate formula Na2O•xSiO2. It's a percentage that shifts the equilibrium of silicate ion types toward larger, more complex and polymerized forms rather than smaller and monosilicate forms.

It is ironic that sodium silicate is now used to destroy engines, Vincent notes, because it has been used historically to save automobile engines. It is an ingredient in products, including antifreeze, that help stop small engine leaks.

In sodium silicate's new, lethal mode, Vincent explains, the solution "is poured into the engine in lieu of oil; the heat of the operating engine causes the sodium silicate to dehydrate, forming a solid silicate glass that seizes the engine."

Or as Dugger says, it's "like pouring super glue into the engine block." It can take anywhere from a few seconds to several minutes for an oilless engine, revving at 2,000 rpm as the government-specified procedure calls for, to become a glass-ossified mechanism that will never move again. "It costs about $10 worth of the chemical to kill a car," Dugger notes.

"Our phones have been ringing off the hook" since the government initiated its Cash-for-Clunkers program, Vincent says. "We are pleased to see the attention that our relatively anonymous product is receiving."

PQ sells bulk quantities of the sodium silicate solution that ultimately get into the hands of smaller companies, such as Castle Products, an automotive ingredients supplier based in Rochester, N.Y., that prepares containers of the engine-killing formula.

Soon after Castle and the nation's car dealers heard on July 24 that the sodium silicate solution was the only stuff dealers could use for the CARS program, the orders started pouring in, and company president Hans Blatter and his employees worked around the clock to fill them. "We had requests across the country from various distributors. We have been working a miracle," Blatter says. His company sells the solution in 64-oz containers that are designed for killing one engine, but Vincent notes that suppliers also are selling the product in containers of up to 5 gal.

Castle pulled off a marketing coup with its hastily designed label. On a black background, a skull-and-crossbones overlays the outline of a car and underneath are these words: Clunker Bomb, Engine Grenade, "Guaranteed to kill any engine dead!" Mentions of the company in the Washington Post, "Good Morning America," and other news outlets have propelled it to the top of this instant and transient market, Blatter says.

Ronald L. Balk, president of Grand Rapids, Mich.-based Cleaning Solutions, also quickly ramped up bulk sales of sodium silicate solution, which it usually includes in cleaning products. "We sold our first 55-gal drum within 15 minutes [of its availability] on July 27," he says. "I now have to order more material and we already have sold 1,800 gal."

Although suppliers like Castle are making a buck on sodium silicate products, Vincent says the CARS program is hardly a blip on the sales graph at PQ. "We ship over 150 million gal of product per year in North America alone, typically in bulk via barge, tank car, or tank truck," he says. "The Cash-for-Clunkers requirement is relatively small, probably amounting to well below 500,000 gal through the life of the program."

The CARS program may be small in scope, but it's fast-acting: It was set up to expire on Nov. 1 or when the funds were exhausted, which happened less than a week after car dealers started offering the gas-guzzler trade-in incentive. The White House wants an additional $2 billion for the program, and Congress quickly agreed. This second effort is projected to fund the program through Labor Day.

Despite the automobile executioner role that Dugger and his auto dealer comrades find themselves playing—a bit off mission from the usual selling and repairing of cars—there is little remorse. "We don't have any feelings about these cars," Dugger says, with mirth in his voice. "Man, they're just metal." What's more, he notes, each dead guzzler means Ourisman Rockmont Chevrolet is moving one more new car off the lot.