Animal lessons:
[+]Enlarge
Credit: Shutterstock
Species can learn from each other, despite DNA differences. 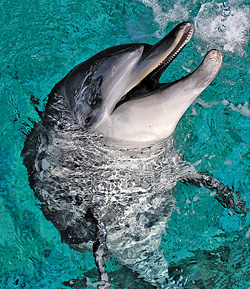 Credit: Shutterstock
Species can learn from each other, despite DNA differences.

Dolphins, pigeons, and locusts, oh my! Rather than retaining the negative connotation from Dorothy's original fear-of-animals version of that phrase in the "Wizard of Oz," a trio of new studies by scientists in Spain, Japan, and Canada is pointing to fascinating lessons that creatures in the animal kingdom have to offer one another.

Echolocation, for one. Porpoises use this technique primarily to navigate the dark, murky ocean. But people can be trained to hone their own rudimentary ECHOLOCATION SKILLS into a better environmental awareness that enables them to distinguish, for example, the distance between a stand of trees and nearby pavement. And that could be especially helpful for the blind or for sighted people in low-visibility situations, according to a report by scientists at the University of Alcalá (Acta Acust. United Ac., DOI: 10.3813/AAA.918155). 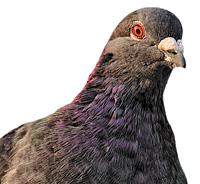 The team examined various mouth sounds to determine which are most effective for echolocation by people. The Spanish team focused on three types of sounds: two different "ch" sounds and the palate-based "click," a noise formed by placing the tip of the tongue on the palate and moving it backward. With tests to determine which sounds people could actually deploy for long times, the researchers found that the click, which is similar to sounds made by dolphins, is the most effective. Waveform analysis indicated that the clicks carry information needed for accurate distance estimates, and tests with people showed that they could make and use the sounds for that purpose.

The Spanish team plans to further examine other sounds, such as hand clapping.

To the dismay of city folk and tourists everywhere, "sky rats" may have an inclination to join them in fine art museums. Researchers at Keio University have discovered that pigeons, like humans, can develop a CONCEPT OF BEAUTY.

The Japanese researchers first asked 11 adults to judge watercolor and pastel paintings by Tokyo schoolchildren as "good" or "bad." Then they trained four pigeons to make the same judgments. Using conditioning procedures, the scientists rewarded the birds with food for pecking at the "good" paintings, which were characterized as having images with clear and distinct shapes, not simply blobs of color on a page. Then, when the birds were presented with both "good" and "bad" paintings, the conditioned pigeons consistently pecked at the good ones more than at the less pleasing ones.

The size of the images didn't affect the bird's choices, but color did: Their taste in art became indiscriminate when the images were presented in grayscale.

The researchers say these experiments show that humans and pigeons can share more than just sidewalks. Human brains and bird brains can be trained to use similar visual clues to define beauty, the scientists suggest in a recent issue of Animal Cognition (DOI: 10.1007/s10071-009-0246-8).

Even locusts can muster a teachable moment. A group of biologists at Queen's University, in Ontario, studying the insects' nervous system has discovered that human disorders such as epilepsy, migraines, and stroke are linked by a BRAIN DISTURBANCE that causes nerve cells to shut down. The same brain disturbance occurs in the insects when they enter a comalike state to conserve energy under extreme conditions such as high heat and immersion in water.

In the study, published in a recent edition of the Journal of Neuroscience (2009, 29, 8225), the researchers show that this locust coma can be manipulated with drugs that target broadly acting cell-signaling pathways such as the NO/cGMP/PKG pathway. The cellular responses in the insect are similar to the ones found at the beginning of a migraine in humans, and the researchers now hope to rely on their locust model to study potential new drug therapies to treat this and other conditions.