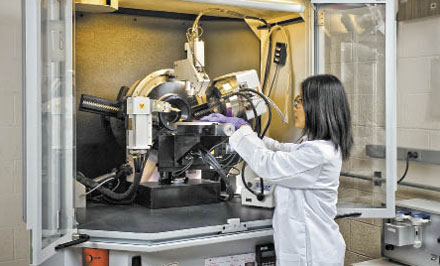 First-time visitors to Ricerca may have trouble finding the company on Auburn Road in Concord, Ohio. All that can be seen from the street is the Quail Hollow Country Club on the left and the University Hospitals Concord Health Center on the right. But Ricerca’s multifacility campus covers 43 acres of Ohio lake country and can be glimpsed just behind the construction site for a new wing of the hospital.

The company may also be hard to place in the sprawling landscape of contract services for drug development, where, over the years, Ricerca has covered a lot of ground.

Established in 1961 as an R&D center for Diamond Alkali, a diversified chemical company (it included the golf course across the street at the time), the Concord facility began by registering industrial and agricultural chemicals with environmental regulators. Since then, the site has amassed a rich heritage in chemistry and biology, evolving through a succession of owners to a near 50-50 split between small- and large-molecule science focused on contract research and toxicology studies for early-stage drug development.

Achieving that focus has been a challenge for the firm’s new owners, a team of private equity firms including Bain Capital, Cowen & Co., and SB Life Science Equity Management that took over in a $75 million recapitalization in 2007. The job has fallen largely to its chief executive officer, Ian Lennox, who was brought in by the current owners in 2005 when they were thinking of investing in Ricerca.

By that time, Ricerca had run the gamut of contract research services. Founded as an agricultural chemical research concern when Fermenta Biotech, a Swedish firm, purchased the Concord site in 1986, Ri­cerca switched to pharmaceutical chemicals when it was acquired by Ishihara Sangyo Kaisha, a Japanese chemical company, in 1990. It went on to launch an ill-fated attempt at becoming a drug company under new owners, a private equity group led by Cowen, in 2000. That foray hit the wall in 2004 due to lack of financing.

Despite its anchor in contract research, Ricerca lacked definition when Lennox arrived. “When I came here, I had never heard of Ricerca,” he says. “And I had been in the business.”

Lennox, who ran Monsanto’s specialty pharmaceuticals business in the 1980s and had most recently been CEO of Phoenix International Life Sciences, in Montreal, saw some problems with the company. “It had a weak balance sheet and was not well financed,” he says. “And senior management was not leading it the way it needed to.” These problems revolved, he says, around the decision to license drugs to develop on its own, which was causing the company to turn away customers for its contract chemical development and toxicology research services.

But Lennox saw a distinct upside in Ri­cerca’s research expertise and facilities, and he liked the feedback from its contract services customers, most of which are small drug and biotech companies.

“My job has been to make it clear that our strategy is to focus on pharmaceutical services,” Lennox says. “We are a contract research organization, 100%. All our drug development efforts were stopped, and all our attention went back to our clients, improving services and offering broader capabilities.”

To that end, Ricerca has invested $20 million over the past three years to expand its research, process chemistry, and pilot-scale manufacturing capabilities. It spent nearly $13 million on a new primate facility and associated bioanalytical and histology operations.

The firm now has a clearly defined approach to the market, offering chemistry and biology development services to take clients’ compounds to the point of an Investigational New Drug (IND) filing, the Food & Drug Administration’s green light to begin clinical trials on humans, says Mark Crane, vice president of business development and marketing.

“We are unique in that we are the only company that can integrate the chemistry and the biology at one site,” Crane says.

Crane describes a broad sweep of assets on campus, including a pilot plant certified to FDA’s current Good Manufacturing Practice standard, six kilogram-scale laboratories, and 10 spectroscopy units, including one for nuclear magnetic resonance spectroscopy. Also included are facilities for X-ray diffraction and a range of other technologies, Good Laboratory Practice-certified toxicology operations, and 43 animal rooms.

The IND-focused business model has resulted in significant growth. Ricerca, with 2008 sales of about $60 million, has achieved between 18 and 20% annual growth for the past five years, according to Crane.

This year, however, the company faces a significant downturn. “We will be happy if we just stay flat,” Crane says. He and Lennox say the economic downturn has put a hold on work that is dependent on venture capital financing. The firm recently cut its staff by 10% to 285.

Right now, the split between chemistry and biology is about even at Ricerca. But Lennox predicts that in five years biology will outstrip chemistry, growing to 60% of the company’s business, given the trends in drug development and the firm’s investment in expanding its toxicology and other early-stage biology contract services.

Crane and Lennox emphasize the importance of customer relationships, noting that Ricerca agreed recently to become the commercial-scale producer for an imaging agent on which it had done development work.

Staff stability has also been a plus. The heads of most of the company’s divisions, such as Michael D. Contenza, director of process development and engineering, have been with the company for 20 years or more. Contenza is overseeing an expansion of pilot plant capacity, which is currently at 17,000 L, with the addition of a 2,000-L vessel and two 200-L vessels and a data management system upgrade. “We are positioning ourselves to manufacture small-volume [active pharmaceutical ingredients] that may hit the market,” he says.

Another 20-year employee is Anthony C. Gallacher, director of analytical chemistry. He has acquired new equipment for the company, including an X-ray diffraction spectrometer.

“A common comment from visitors is, ‘Boy, you’re well equipped,’ ” says Gallacher, who also notes the company’s eye on downstream development, beyond only liquid and gas chromatographs.

Industry analyst James Bruno, president of Chemical & Pharmaceutical Solutions, says Ricerca is carving out a niche by concentrating on contract research services without going all the way to production.

“I’m not sure if that is good or bad, but it is significantly different from everybody else out there,” Bruno says. “They are also one of the only companies that do early toxicity research, as well.” He adds, however, that the company has gone through a number of “permutations” over the years that have led to some confusion over its service offering.

Lennox and Crane are confident that Ricerca’s focus on comprehensive early development services will alleviate that confusion. And they are optimistic that Ricerca will get through the year and continue to grow, given the demand for early drug development work.

In Lennox’ estimation, growth will not resume until at least the second quarter of 2010. “We still think we are 12 months away from significant growth in this market,” he says. “But we believe that the market will come back and that basic research and fundamental innovation will be rewarded.”

Chemical Regulation
Yet another strong year expected for pharmaceutical services
Outsourcing
Flamma gains a North American foothold near Philadelphia
Outsourcing
The good times keep rolling in pharmaceutical chemicals
Share X
To send an e-mail to multiple recipients, separate e-mail addresses with a comma, semicolon, or both.
Title: Positioning Ricerca
Author: Rick Mullin
Chemical & Engineering News will not share your email address with any other person or company.