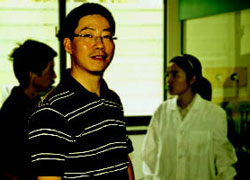 Credit: Jean-François Tremblay/C&EN
Ye works on both export and import sides of the pharmaceutical ingredients trade.

It’s a problem that most companies buying drug ingredients from China have faced or are struggling with now: Who is a reliable supplier? Chinese prices for many drug ingredients are so competitive that it makes little sense not to buy from China. But the vast country offers an overwhelmingly large number of drug ingredients suppliers to choose from, few of which are capable of meeting the expectations of foreign buyers. Solving that riddle is, in a nutshell, Jack H. Ye’s business plan.

Ye is the founder and managing director of the Chinese custom chemical supplier Viwa. “There are in China many bigger companies than us, better established ones with nice R&D labs and impressive production facilities,” he says. “But in business, it takes a lot longer to establish trust than to build facilities.”

Based in Hangzhou, in China’s Zhejiang province, Viwa does not own or operate a manufacturing facility. And yet, its main business is custom manufacturing of active pharmaceutical ingredients, pharmaceutical intermediates, and active ingredients for agrochemicals. More than 90% of its products are sold to customers abroad, Ye reckons. The firm is also developing a business of importing into China drugs in bulk and finished dosage forms. Several of the companies he represents in that new business are from Europe and India. Viwa’s sales have been growing by 50 to 100% annually since the company was founded in 2004, Ye says. “But that’s from a small base,” he points out.

Although Viwa is just five years old, its founder is a relatively well-known face in pharmaceutical manufacturing circles. Prior to setting up his own company, Ye worked for a decade at Sinochem, China’s largest state-owned chemical and pharmaceutical trading firm.

“I have had a good personal and professional relationship with Jack for over 10 years,” says Roger Laforce, the general manager for marketing and sales at the Italian pharmaceutical ingredients producer Fabbrica Italiana Sintetici (FIS) and a member of C&EN’s editorial advisory board. “Jack understands Western thinking very well and is able to bring together the ‘two worlds,’ which is still rare for partners in China.” In 2007, FIS and Viwa agreed to form Datang Pharmachem, a joint venture that is involved in rapid synthesis screening and method development for FIS and other clients. Datang also imports and distributes some of FIS’s products in China.

Viwa operates differently from many other Chinese producers of pharmaceutical ingredients, Laforce says. “Many companies in China first build a plant and then look for business opportunities,” he says. “These companies may have outstanding plants, but the marketing and sales part is very weak.”

Not so at Viwa, it seems. Ye says he’s been careful to staff his sales team with people who have a technical background. Viwa employs a total of 42 people, including R&D staff and Datang’s operations. “They may be more at ease writing e-mails than speaking in English, but they basically have the same understanding of the business as the customers,” he says. Most of Viwa’s competitors in China, he adds, aren’t able to supply technical data along with their products.

Another difference is that instead of producing at company-owned facilities, Viwa relies on toll manufacturers. Zhejiang province is home to about 70% of China’s pharmaceutical ingredients manufacturing capacity, Ye estimates. Most plants are within a few hours’ drive of Hangzhou. Viwa—as well as Datang—defines the production protocols. “We may not own the plant, but we own the product because we’ve developed it in our labs,” he says.

In addition to keeping manufacturing costs minimal, Ye has found a way to minimize the cost of developing R&D capabilities. Viwa and Datang operate two labs in Hangzhou and are planning to set up a third one. The facilities are housed in universities and operated under special arrangements. Viwa and Datang pay the universities for lab space and access to expensive lab instruments through a well-defined contract. The labs are staffed by company employees but led by academics, who are paid by the universities and are still active lecturers. The professors are bound by secrecy agreements to protect any intellectual property that they might come across, Ye says.

Working with Ye and his team, Laforce says, has not only helped to solve for FIS the riddle of how to safely source materials from China, it has also revealed how to open the Chinese market for FIS products. Laforce says that imports and distribution need to be managed by a China-based company, something that Datang can accomplish. “There are many tax laws, tax incentives, and tax benefits throughout China that are changing constantly and vary province to province,” Laforce says. “You need a partner who understands all the tax rules.”

Ye sees a high potential for his business of importing foreign generic drugs into China. He points out that some oncological drugs from India are more competitive than those produced in China. In addition, many Western drugs, even generic ones, are protected by manufacturing process patents or made by only one producer. More and more, he says, companies like FIS see China not just as a source of cheap materials but also as a market.

Business
China Emerging As  Pharmaceutical Chemical Market
Business
Flocking To Japan
Pharmaceuticals
Sourcing Beyond China And India
Share X
To send an e-mail to multiple recipients, separate e-mail addresses with a comma, semicolon, or both.
Title: Viwa's Business Model
Author: Jean-François Tremblay
Chemical & Engineering News will not share your email address with any other person or company.