GETTING CLEARANCE
[+]Enlarge
Credit: Shutterstock
Exporting chemicals that might be used to make weapons requires a license from the Department of Commerce. 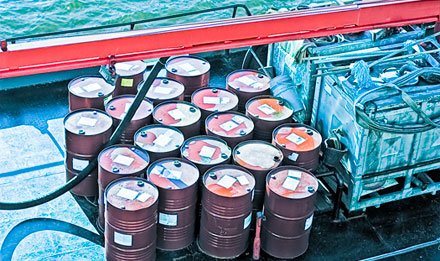 Credit: Shutterstock
Exporting chemicals that might be used to make weapons requires a license from the Department of Commerce.

Government control of U.S. chemical exports has increased significantly in the past decade in response to growing terrorism threats. Several layers of regulations detailing exactly what chemicals can be exported to which nation and for what use are in place. And these export rules are being revised often, with the latest update in July. This ever-changing regulatory landscape can create a minefield for chemical importers and exporters.

To help navigate the federal rules, Dennis L. Krepp, the acting director of the Chemical & Biological Controls Division in the Department of Commerce’s Bureau of Industry & Security, described the regulatory network for chemical exports earlier this month at a symposium of the Division of Small Chemical Businesses at the ACS national meeting in Washington, D.C.

“We need to control exports to support our national interest,” Krepp said. “There are terrorists and rogue states that are trying to get sensitive information” and do harm to the U.S. and its citizens, he pointed out. Most chemical controls are in place to prevent the export of compounds or equipment that might be used or diverted to make chemical or biological weapons. Export controls are also used to further U.S. foreign policy objectives, honor international obligations, and help protect scarce resources, he said.

Chemical exports are subject to regulation according to three different schemes. One is the international agreement under the auspices of the Australia Group. “The 40 countries participating in the Australia Group have agreed to adopt harmonizing controls on certain dual-use chemicals, biological agents, related manufacturing facilities, and equipment,” Krepp told C&EN. “This is to ensure that these items do not contribute to the proliferation of chemical or biological weapons.”

The group, which includes countries as diverse as the U.S., Turkey, and South Korea, has an agreed-upon list of restricted chemicals for which export licensing is required because they may be used as precursors for toxic chemical agents. These restricted chemicals often have major industrial uses and large trade volumes.

The latest amendments to the Australia Group list were finalized by the U.S. in July. Krepp noted that most of the additions are for equipment that might be used in handling toxic materials. Some of the newly restricted items include ceramic materials for valves, components for toxic-gas-monitoring systems, and certain disposable filters.

A second set of chemical control regulations falls under the Chemical Weapons Convention (CWC). Ratified by the U.S. in 1997, this treaty requires regulation of chemicals that have been developed, produced, stockpiled, or ever used as chemical weapons. Like the Australia Group, CWC imposes reporting requirements on industry for exporting or importing any of its listed compounds if they exceed a proscribed threshold. The complexity of these regulations are such that Krepp advises going to the Commerce Department’s convention website (www.cwc.gov) for details on the various chemical lists and licensing, as well as for end-use requirements.

The third category consists of regulations that are set by the U.S. for its own purposes and are not driven by international obligations. These unilateral restrictions are generally for chemicals that might be used by terrorists or are necessary for other foreign policy or economic concerns. “Generally, these are restrictions on exports for regional security controls, such as exports to Iraq, that will require a license,” Krepp told the symposium attendees. They also include compounds in amounts below the CWC threshold limits that the U.S. still wants to have some minimum level of control over.

Krepp also said the U.S. keeps what is called an entities list for exports. This is a compilation of names of foreign businesses, organizations, institutions, and individuals that are subject to additional license requirements for the export of specific items. Originally created to prevent activities that could result in the diversion or transfer of exports to make weapons of mass destruction, the list has been expanded to include other activities that are sanctioned by the State Department or other national security interests.

“On the chemicals side, there are not a lot of entities on the list,” Krepp said. “It is mostly for exports of missile and nuclear materials.”

Krepp said effective enforcement of these restrictions requires a lot of cooperation between government and industry. “We get help from industry on keeping track of exported chemicals,” he said, adding that this assistance ensures that everybody is playing by the rules.