British polymeric materials company Bac2 has announced development of a novel latent acid catalyst that enables thermoset phenolic resin composites to be premixed and stored for months before undergoing heat-activated polymerization and molding. Because of the nature of the catalyst and two-part resin/binder system, these types of resins normally must be mixed just prior to molding. Bac2 scientists say the new one-part system offers manufacturers of laminated wood, reinforced plastics, and coated materials much greater flexibility in the way they produce and market their products.

Typical latent acid catalysts for phenolic resins are a combination of an amine with a strong acid, such as sulfuric acid, which forms a neutral adduct, explains Graham Murray, Bac2's founder and chief technology officer. When heated, the adduct decomposes, releasing the acid and setting off polymerization and cross-linking (curing) of the resin, Murray says. But standard latent acid catalysts are either too stable, requiring temperatures above 200 °C for activation, or aren't stable enough for long-term storage in a premixed material, he adds. 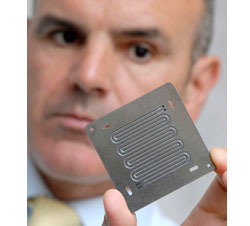 As Murray and his colleagues were developing the company's flagship product, a conductive phenolic resin and graphite composite called ElectroPhen that is used in fabricating fuel cells, they realized that premixing the composite in their facility and then shipping it to customers to carry out molding at their sites would be necessary. This approach is much more convenient, Murray notes, plus it dramatically reduces costs and improves process safety and product quality.

Bac2 can't disclose the exact formula of its novel catalyst, dubbed CSR10, until the patent application is approved, but Murray says it is in the family of amino-type acid catalysts. With CSR10, the premixed material can be stored for at least three months prior to polymerization, which proceeds with "surgical control" by heating the premix to 120 °C, he adds. Murray believes CSR10 can be extended for use with furan and other types of acid-catalyzed polymer resins.

Users of thermoset polymers would much prefer a one-part system to having to mix the materials on-site, says Michael J. Mullins, a polymer chemist in Dow Chemical's Advanced Materials Division. Although there isn't enough information to fully evaluate CSR10's attributes, Mullins says, "if it has sufficient latency to allow storage of premixed formulations while maintaining its other properties, this is an important development."

Bac2 is already working with its business partners on testing CSR10. Marc Cornick of Finland-based Dynea, a producer of adhesives and surface-coating materials for wood-processing and other industries, says that CSR10 has certainly sparked interest at his firm. "As one of my colleagues said: A useful latent catalyst is the material that resin alchemists have been seeking for decades," Cornick notes.