REVEALING ATOMS
Credit: IBM Research, Zurich
This video shows how Leo Gross, Fabian Mohn, Nikolaj Moll, Peter Liljeroth, and Gerhard Meyer at IBM Research, in Zurich, were able to use atomic force microscopy to visualize the atoms and bonds in a single molecule.

By functionalizing an atomic force microscope tip, researchers have greatly enhanced the resolution of atomic force microscopy (AFM), making it possible to view the entire structure of a single molecule. Physicist Leo Gross of IBM Research, in Rüschlikon, Switzerland, and coworkers accomplished the feat on the aromatic compound pentacene (Science 2009, 325, 1110). 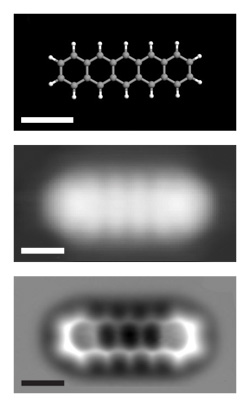 Although atomic resolution has been attained previously for AFM imaging of individual atoms in nanotubes and in unit cells of crystals on surfaces, this is the first time all the atom positions and bonds of a single molecule, including its hydrogens, have been visualized with atomic-scale precision. Only a few weeks ago, Gross and coworkers published a paper showing that AFM can be used to measure charges with single-electron resolution on individual atoms (Science 2009, 324, 1428).

The IBM team overcame the atomic resolution barrier by trying a range of atoms and molecules as AFM tip terminations. They achieved their best imaging results by putting carbon monoxide onto the AFM tip.

Distances between pentacene atoms are only 1.4 Å, and the new images of them are “state of the art in terms of lateral resolution,” Gross says. In the images, it’s possible to deduce the positions of hydrogen atoms, which are too tiny to have ever been visualized before.

The study “is a major advance in the field of scanning probe microscopy and characterization of molecules at surfaces,” says Óscar Custance of the National Institute for Materials Science, in Tsukuba, Japan. It is “astonishing and groundbreaking,” he adds.

Until now, “molecules at surfaces have been seen by AFM as structureless protrusions,” Custance says. “These new results blast away any other molecular resolution limit accomplished to date by scanning probe microscopy”—the AFM and STM family of techniques—“and demonstrate that, with the right tip, the resolution achievable with AFM greatly surpasses that of STM. The work truly opens up new avenues to explore the behavior and properties of molecules at surfaces, and even the possibility of functionalizing them.”

Close Approach
[+]Enlarge
Credit: IBM Research, Zurich
In this depiction, an AFM tip (gold) with a CO terminus (C is gray, O is red) traces an image (blue, red, and green surface) of atoms and bonds in pentacene (C is gray, H is white). 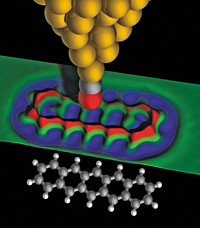 Credit: IBM Research, Zurich
In this depiction, an AFM tip (gold) with a CO terminus (C is gray, O is red) traces an image (blue, red, and green surface) of atoms and bonds in pentacene (C is gray, H is white).

Physicist Alexander Shluger of University College London notes that attaching the very tiny and chemically inert CO molecule to the AFM tip made it possible for Gross and coworkers to visualize atomic features in the larger pentacene molecule. The IBM team helped confirm the findings by showing that density functional theory predicts the same type of image, he adds. The study “is a very important step forward and will have strong implications for our understanding of adsorption of molecules at surfaces,” Shluger says.

“We hope we can image a large number of molecules with atomic resolution,” Gross says. Among remaining questions, he says, are: “Can we differentiate carbon, sulfur, nitrogen, and other atoms? And can we say something about bond order—how many electrons are in each bond?” By combining single-electron and single-molecule capabilities of AFM, it may also eventually be possible to study single-electron transport through individual molecules on the atomic scale, he says.