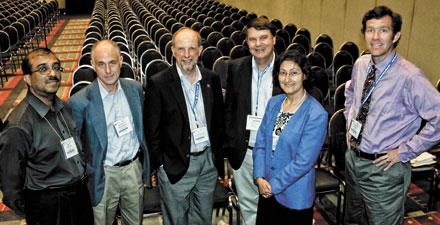 Drug development is perhaps the most complicated of all human endeavors. After exhaustive research to discover a drug candidate for a target ailment, pharmaceutical scientists must confirm the efficacy of the compound and determine if it’s toxic to people. As part of this process, researchers have to take a step back and look at any possible mischievous by-products created when the drug circulates in the body and is metabolized. Any hints of toxicity stemming from major metabolites could derail the prospective drug and ruin its chances of reaching blockbuster status.

How the Food & Drug Administration views these problematic human drug metabolites and the hoops that pharmaceutical companies must jump through to identify and work around them were the topics of discussion during a symposium held earlier this month at the ACS national meeting in Washington, D.C., cosponsored by the Divisions of Chemical Toxicology and Medicinal Chemistry.

The liver is the primary organ responsible for drug metabolism, and most drugs are substrates for the liver’s cytochrome P450 oxidase enzymes, explained P450 expert F. Peter Guengerich, director of Vanderbilt University School of Medicine’s Center in Molecular Toxicology and a symposium coorganizer. Humans and mammals used in drug testing have 50–100 genes that code for P450s, Guengerich said. Between the different species the same enzymes often yield similar drug metabolites. But sometimes they don’t.

“Within the human population there are P450 variants that give rise to some differences in drug metabolism,” Guengerich noted. “But for the purpose of drug safety testing, the key interest is looking at the differences in metabolism between humans and animals.”

For example, although rat and human P450 1A1 have the same name, they are not the exact same enzyme, Guengerich said. They are about 80% identical, he noted, differing by about 100 amino acid residues, so it’s not surprising that they are going to vary in how they interact with drugs and produce drug metabolites. Similar differences occur for conjugating and hydrolysis enzymes, he said.

Overall, it is extremely difficult to make extrapolations between animals and people in safety testing for metabolites, Guengerich emphasized. “This problem has prompted an increased interest in human-specific drug metabolites and their potential toxicity,” he said.

In an effort to help inform the research community, Guengerich, an associate editor of ACS’s Chemical Research in Toxicology, coordinated a special issue of the journal published this past February on human metabolites in safety testing. As a follow-up to reach a broader audience and provide a forum for discussion, Guengerich and Nicholas A. Meanwell of Bristol-Myers Squibb organized the ACS symposium.

Diverging Paths
[+]Enlarge
The experimental analgesic drug OT-7100 is metabolized by the human P450 1A2 enzyme to form M-23OH, which conjugates with a peptide to form an adduct that has liver toxicity. In rats, the same enzyme forms some M-23OH but leads predominantly to M-22OH, which shows no toxicity (Chem. Res. Toxicol. 2009, 22, 323). These metabolic differences highlight some of the perils of testing drug candidates for metabolite toxicity.

The experimental analgesic drug OT-7100 is metabolized by the human P450 1A2 enzyme to form M-23OH, which conjugates with a peptide to form an adduct that has liver toxicity. In rats, the same enzyme forms some M-23OH but leads predominantly to M-22OH, which shows no toxicity (Chem. Res. Toxicol. 2009, 22, 323). These metabolic differences highlight some of the perils of testing drug candidates for metabolite toxicity.

The issue of human metabolites in drug testing has been debated by FDA and pharmaceutical companies for several years, noted symposium speaker Aisar H. Atrakchi of FDA’s Center for Drug Evaluation & Research. A slowly formed consensus led FDA to issue a guidance document on safety testing of small-molecule drug metabolites in early-stage drug development in February 2008, Atrakchi said. She provided a bit of the history and explained FDA’s rationale and expectations for toxicity testing of metabolites during her talk.

The FDA guidance states that any human drug metabolite formed at greater than 10% concentration of the parent drug compound circulating in the blood is subject to separate safety testing, Atrakchi said. In addition, metabolites that either can’t be detected in animals or are present at much higher levels in people than in animals are subject to testing.

Other triggers that could lead to additional testing for metabolites include drug binding to nontarget receptors and compound “structure alerts,” Atrakchi noted. In the latter case, medicinal chemists know that certain types of functional groups, such as hydrazines, thiophenes, anilines, quinones, and nitroaromatics, can be troublemakers and lead to toxic metabolites, she said. Chemists try to avoid these groups when designing drugs, but when they are present they alert chemists to be on the lookout for possible toxic metabolites and to make structural adjustments if needed.

Although the guidance might not sound too burdensome, it adds more complexity to the already complex drug development process by increasing the number of compounds to evaluate and increasing the expense of an already expensive process. But one point Atrakchi reiterated is that the issued document is a set of recommendations, not a regulatory rule. “The guidance was framed with the best interests of pharmaceutical companies in mind to help them weed out problematic drug candidates early on before the formal New Drug Application is filed,” she said.

Abstracts of the talks presented at the meeting are available at: www.acschemtox.org/newsletter/2009/06/abstracts.html

In addition to Atrakchi’s presentation, three pharmaceutical scientists discussed new ideas and research tools aimed at facilitating metabolite toxicity studies. Abdul Mutlib of Wyeth Pharmaceuticals described how advanced nuclear magnetic resonance spectroscopy techniques can be used to obtain quantitative data on metabolites in blood. This approach can potentially avoid the need to separately synthesize the metabolites for animal testing, he said, which can save time and money, especially on radioisotope-labeled compounds commonly used for in vivo metabolite studies.

Pfizer’s R. Scott Obach provided an overview of toxicity mechanisms and presented a study of 24 drugs that have been withdrawn from the market. Obach noted that 14 of the drugs had toxicity associated with metabolites. These metabolites were not human-specific, he pointed out, meaning that additional testing would not have turned up any data that would have raised a red flag and prevented drug approvals. This latter analysis is helpful in sorting out different causes for toxicity, he said, but highlights that metabolite toxicity testing is a tricky business.

Merck & Co.’s Clay B. Frederick presented results on the use of ultra-performance liquid chromatography/high-resolution mass spectrometry that are useful for making drug metabolite profile comparisons between people and test animals. He also noted efforts to create “humanized” mice in which human genes that code for P450 enzymes are inserted into mice, providing better mouse models of human drug metabolism.

As the symposium concluded, Guengerich summarized the topic of metabolite safety testing this way: “The issue of human-specific metabolites is a complex one, and much remains to be learned.”