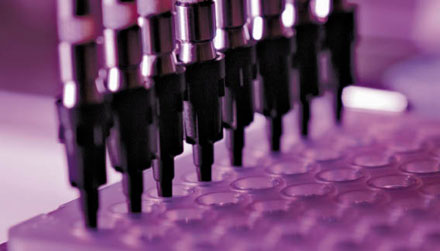 “There’s a little yellow pill,” the Rolling Stones once crooned, to get mom through her busy day. Whether or not the song was about Valium, the sedative became “mother’s little helper” for a generation. Most of the millions who popped it to calm their nerves had no idea how it worked. Although Valium wasn’t a perfect therapy, drugmakers are trying to co-opt the good side of its mechanism of action to develop new medicines aimed at G-protein-coupled receptors (GPCRs), one of the biggest classes of drug targets.

Valium and its molecular relatives, the benzodiazepines, are among the founding members of a growing family of allosteric drugs. Allosteric means “other site,” and that is where allosteric drugs exert their effects—at protein sites outside of the one where the body’s chemicals usually bind, known as the orthosteric site in pharmaceutical parlance. As a result, allosteric compounds have a host of attributes that make them attractive therapies.

At the American Chemical Society fall national meeting in Washington, D.C., speakers from Pfizer, Abbott, and Eli Lilly & Co. joined Addex at a symposium to discuss allosteric drugs at various stages of development. “A lot of companies are moving into allosteric drug discovery,” says Vincent Mutel, Addex’s chief executive officer. “This mechanism of action has the potential to address many different diseases.”

Allosteric drugs can modulate a biochemical signal’s intensity—fine-tuning it instead of just forcing it on or off. “It’s more of a dimmer switch,” Mutel explains. So-called negative allosteric modulators tone down an excessive signal, while positive allosteric modulators boost a weak one. That range of biochemical options may come in handy for diseases such as Parkinson’s, which might be treatable by simply tweaking the levels of some brain signals.

Because allosteric drugs just help natural signaling systems work more efficiently, “you get more normal, real signaling with an allosteric molecule” than with an orthosteric agent, adds Arthur Christopoulos, a pharmacologist specializing in allosterism at Monash University, in Australia.

Compared with orthosteric drugs, it’s easier to develop allosteric drugs that are selective for a target of interest and thus less likely to elicit side effects associated with poor selectivity. That’s because orthosteric sites on related proteins are generally similar, having often evolved to interact with similar ligands. In contrast, nature allows other parts of proteins, including allosteric sites, to diverge more freely.

Despite those potential benefits, and despite Valium’s storied existence as a blockbuster, it was only recently that drugmakers set out to systematically search for allosteric drugs.

The motivation came from companies’ intense interest in GPCRs, which “represent a large slice of the drug discovery pie,” says Christopoulos, whose expertise is GPCR pharmacology. A family of membrane-spanning proteins, GPCRs trigger cellular responses to a range of signaling molecules as diverse in function as they are in structure, from hormones and neurotransmitters to photons of light. Nearly half of today’s drugs affect GPCR activity but they target only about one-tenth of the GPCRs in the body, Christopoulos says. In light of the success of GPCR-targeted drugs such as blood-pressure-lowering beta-blockers, pharmaceutical companies are eager to access an even bigger piece of that pie.

But they ran into a few problems on the way. For instance, in the 1980s, several companies sought a drug that would selectively activate a specific GPCR that responds to acetylcholine. Teams searched for ligands that bound at the orthosteric (acetylcholine-binding) site. Such drugs were thought to be good ways of treating Alzheimer’s disease or schizophrenia, says Craig W. Lindsley, a medicinal chemist at Vanderbilt University’s Program in Drug Discovery.

Several drug candidates improved patients’ symptoms in clinical trials but ultimately didn’t make it to market. “Patients wouldn’t take the medicines,” Lindsley, who co-organized the ACS meeting symposium, recalls. Because the orthosteric drug candidates had only modest selectivity, they had undesirable side effects such as excessive salivation.

Today, drug designers might have turned to allosteric molecules to fix such problems. But back in the ’80s, allosterism wasn’t on the radar of most researchers in the GPCR field. Ion-channel experts knew the Valium story, but its lessons hadn’t yet filtered down the hall to their colleagues.

“As scientists, we tend to get in our comfort zones of thinking, and people in the GPCR field were just not in a large-scale manner focusing on that idea,” says P. Jeffrey Conn, a pharmacologist who directs Vanderbilt’s program in drug discovery. What’s more, in risk-averse company environments, allosteric GPCR modulators “hadn’t been done, so there was little support for thinking they could be done,” he adds.

New technology changed the status quo. Until the mid-1990s, screening for compounds that target GPCRs involved a competition binding assay with a radiolabeled ligand for a GPCR of interest. But that approach turns up hits that bind in one place only—at the orthosteric site. “Usually, only a few amino acids make up the ligand-binding site, so you’ve got 95% of the protein you’re ignoring in your screen,” says Mark A. Varney, CEO of Cortex Pharmaceuticals, a biotech firm that specializes in compounds that allosterically modulate certain classes of ion channels.

In 1999, biotech company Sibia Neurosciences, in collaboration with Novartis, used functional assays to find a pair of molecules that could selectively diminish the signaling activity of a glutamate-sensitive GPCR, mGluR5 (J. Pharmacol. Exp. Ther. 1999, 290, 170). At a time when bigger companies were still largely focusing on orthosteric GPCR drugs, “we took a different approach, and it turns out we were pioneers,” says Varney, who led the Sibia team. The study, among others, got the GPCR field talking.

For the Roche team, the parallels with Valium were obvious. After all, Valium was a positive allosteric modulator of an ion channel, the GABAA receptor, Mutel recalls. “I was blessed because I had spent years working with ion channels,” he says. While at Roche, Mutel interacted with the late Roche pharmacologist Willy E. Haefely, who led the team that figured out how benzodiazepines such as Valium worked. “We were in the allosteric realm every day, so when we became interested in GPCRs, it wasn’t really a problem to use the concept,” Mutel says.

It was the mGluR1 result that Mutel would mull over in 2002, as he pondered the future of his fledgling company. Addex was then specializing in treatments for addiction. Ultimately, Mutel decided to refocus Addex into an allosteric drug company.

Scientists at Addex soon realized that to succeed, they had to do drug discovery differently. The same challenges came up at every company that moved into the allosteric area.

Better functional assays are one component of the new formula. Addex, for instance, is developing a battery of proprietary whole-cell assays that measure dynamic changes in a GPCR’s signal, says Jean-Philippe Rocher, head of core chemistry at Addex.

One of the drawbacks of many functional assays is that they detect calcium signaling, which is a few steps downstream from the GPCR itself. “We would like to measure events as close to the receptor as possible,” Rocher explains. To do that, Addex tags both a GPCR and its binding partner in the signal transduction pathway and then measures changes in fluorescence that occur upon binding or dissociation.

In the world of orthosteric GPCR binding, the number one parameter chemists optimize is binding affinity. But in the world of allosteric modulators, things aren’t so cut-and-dry, says Amgen Scientific Director Jeff D. Reagan, who helped improve the understanding of cinacalcet’s molecular pharmacology. Chemists might need to juggle improvements of several parameters and risk entering into a data minefield where improving one property makes another worse.

What’s more, “with GPCRs, you don’t have a lot of structural information,” says Scott D. Kuduk, a medicinal chemist at  Merck who co-organized the ACS symposium with Lindsley. “With an orthosteric site, you might know a little about the binding site,” but all bets are off in the allosteric realm, he says. Recently, Kuduk was part of a team that uncovered BQCA, a positive allosteric modulator selective for a member of the same acetylcholine receptor family that foiled researchers back in the ’80s (Proc. Natl. Acad. Sci. USA 2009, 106, 15950). “We did site-directed mutagenesis to try to get some idea of the binding site,” he says.

It’s complicated even for allosteric drugs already further along in the pipeline. For example, to see how well a drug is reaching its site of action in patients, companies use an imaging technique called positron emission tomography (C&EN, Sept. 8, 2008, page 13). For every new allosteric drug candidate, researchers have to develop a new PET tracer because each compound may bind to a different site, Varney says. “For an orthosteric drug, there may already be an existing PET label to use,” he explains.

Despite the challenges, more allosteric modulators may soon reach the medicine cabinet. For instance, AFQ056, a relative of the early Sibia GPCR-targeted compounds, is in clinical development at Novartis, Varney says. And Addex’ ADX10059, a GPCR-targeted agent for potential treatment of the migraine and heartburn associated with gastroesophageal reflux disease (GERD), is also being tested in patients. Allosteric modulators of ion channels are also in clinical trials or late preclinical studies.

It’s too early to tell whether taking allosteric inspiration from Valium will help drugmakers make further inroads into the GPCR class. But for diseases marked by subtle changes in signaling, such as Parkinson’s or schizophrenia, a drug that can dial in activity as needed is a worthwhile goal. “I’m optimistic,” Lindsley says. “The biggest challenge is the complexity of the biology. The key is to understand that there is complexity and to take a thoughtful approach to tackling it.”

Drug Discovery
HotSpot Therapeutics debuts with $45 million to pursue allosteric inhibitors
Biological Chemistry
Small Molecules Help Reactivate Receptor Linked With Schizophrenia
Biological Chemistry
Switching G Protein-Coupled Receptors On And Off With Light
Share X
To send an e-mail to multiple recipients, separate e-mail addresses with a comma, semicolon, or both.
Title: The Other Site
Author: Carmen Drahl
Chemical & Engineering News will not share your email address with any other person or company.