EPA Moves Ahead On CO₂ Controls 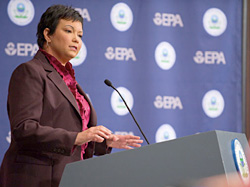 The Obama Administration moved a step closer on Dec. 7 to using its authority to regulate carbon dioxide as an air pollutant under the Clean Air Act—with or without climate change legislation.

EPA Administrator Lisa Jackson announced that the agency had determined that CO2 and five other greenhouse gases are pollutants that threaten public health and welfare and therefore should be regulated under the Clean Air Act.

EPA was required to make the determination under a 2007 Supreme Court ruling, Jackson explained. The specific court case was brought by several states that wished to regulate greenhouse gas emissions from vehicles through the Clean Air Act but had been blocked by the Bush Administration.

Jackson stressed that the so-called endangerment finding did not obligate EPA to issue regulations, but in the case of cars and trucks, EPA has proposed tailpipe emissions caps and efficiency standards that will be finalized next spring. Power plants and industrial sources that emit CO2 are likely to be the next step since they also could be regulated through the act.

"We hope today's announcement serves as another incentive for far-reaching accords in our meetings this week," Jackson said.

The Obama Administration and much of the world hopes a global deal calling for emissions reductions will result from the two-weeks of meetings, an outcome that appears unlikely as the summit begins (C&EN, Dec. 7, page 7).

Environmental groups applauded EPA's announcement saying it sets the stage for global action on climate change at the U.N. conference; industry groups were upset, pointing to the impact on them and the economy of more EPA regulations.

Jackson was circumspect on when industrial regulations could occur. She noted that EPA announced in late September a proposal that large facilities emitting 25,000 tons of CO2 per year must install "best available control technologies" on new or modified plants. Those regulations are now under development, she said, and will be made public next spring. Also she noted that EPA is developing new greenhouse gas reporting and monitoring requirements for emitters that will go into affect in 2011.

The endangerment finding was proposed in April and lead to nearly 400,000 comments filed with the agency, Jackson said. She underscored that her first choice for CO2 controls was legislation, not EPA regulations.

"I believe absolutely that legislation is the best way to move our economy forward on clean energy," she said. A comprehensive energy law, she continued, had the advantage of being economy-wide and giving business the certainty to develop new technologies and approaches to cut CO2. But Clean Air Act regulations and new legislation could be complementary. "It is not an 'either or,' but a 'both and,' " she said, without elaborating.

The American Chemistry Council, a chemical industry trade association, urged EPA to put off regulation of stationary sources of CO2 and instead wait for Congress to write climate legislation. In a statement, ACC raised the specter of "regulatory gridlock" as "millions of emissions permits" would need to be processed by state and EPA regulatory officials under a new greenhouse gas control system.

The National Association of Manufacturers also said EPA's approach would result in a huge cost to the economy and to jobs. Instead, they too urged EPA to wait while Congress writes climate change legislation. However, NAM has opposed legislative approaches passed by the House of Representatives and under debate in the Senate.