GONE
[+]Enlarge
Credit: Department of Energy
On the eve of the summit in Washington, D.C., Chile announced that it removed all HEU from its research reactors, including spent fuel from the La Reina Nuclear Center (shown). 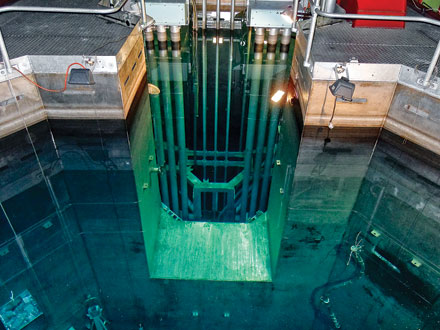 Credit: Department of Energy
On the eve of the summit in Washington, D.C., Chile announced that it removed all HEU from its research reactors, including spent fuel from the La Reina Nuclear Center (shown).

Within four years, the world’s nuclear materials are to be secure from thieves and terrorists under an agreement forged by President Barack Obama and signed by leaders of 47 nations at last month’s Nuclear Security Summit in Washington, D.C.

The summit marked international support for a pledge Obama made a year ago in Prague, Czech Republic, to work to ensure that within four years all nuclear-bomb-grade material is locked down, secure, and unavailable. The goal is to stymie a terrorist who may lack the ability to create highly enriched uranium (HEU) or plutonium but knows how to fashion a bomb with it if he or she can obtain it.

When announcing the agreement at the summit’s conclusion on April 13, the President said that the deal is part of larger nuclear agenda “to pursue the peace and security of a world without nuclear weapons.”

At the summit, Obama described a package of three other nuclear-related government activities: the new Strategic Arms Reduction Treaty, or START, signed with Russian President Dmitry A. Medvedev to cut the deployed nuclear arsenal to 1,550 strategic weapons per country; the U.S. Nuclear Posture Review, which reduces the role of nuclear weapons in the nation’s security strategy (C&EN, April 12, page 8); and the start of negotiations for a new Nuclear Nonproliferation Treaty to curb expansion of nuclear weapons states, which is getting under way this month in New York City.

“All of these efforts are connected,” Obama said. “Leadership and progress in one area reinforces progress in another. When the U.S. improves our own nuclear security and transparency, it encourages others to do the same, as we’ve seen today,” he added, pointing to the agreement among 47 nations.

Although the material security deal was signed with a flourish and applauded by the arms control community, it has fundamental problems that are likely to make its goal tough to achieve within four years, according to nongovernment arms control experts.

“The important goals outlined at the summit will require concerted effort by many nations and sustained leadership by the U.S.,” said Kingston Reif, deputy director of the Center for Arms Control & Nonproliferation. “What follows will be at least as important as what happened there.”

Worldwide there are more than 2,000 tons of plutonium and HEU capable of being used to make a nuclear weapon. The material is held in dozens of countries, but most is in the U.S. and Russia. Its use has been for both peaceful and military purposes.

There have been at least 18 known cases of theft or loss of HEU or plutonium, and it is likely that more incidents have gone undiscovered, according to White House figures.

Loss of bomb-grade nuclear material affects more than nuclear weapons states. During the 1950s and ’60s, as part of their competing Atoms for Peace programs, the U.S. and the Soviet Union built hundreds of research reactors for domestic use and for export to more than 40 other countries. Many of these reactors used or were reconfigured to use fuel containing weapon-grade HEU, reports the International Panel on Fissile Materials (IPFM), an independent group of arms control and nonproliferation experts.

As a result, HEU is still used as a research-reactor fuel in about 140 civilian reactors worldwide, IPFM estimates. Some HEU also remains at sites of shut-down but not yet decommissioned reactors. Taken together, the global inventory of civilian HEU reactor fuel is very roughly 50 metric tons, widely distributed around the globe, the group reports.

Even in the U.S., the conversion from HEU-fueled research reactors to low-enriched uranium (LEU) has been difficult. Some 20 reactors fueled with HEU have been converted to LEU, but another six remain under study, seeking development of an acceptable LEU fuel, the White House says.

The summit’s agreement is voluntary, and it will be left to signatory countries to determine how they will secure their nuclear-bomb-grade material. Despite its vagueness, the agreement and its international focus dramatically raise the importance of stray nuclear materials, which in the past had been on the periphery of international nuclear matters. The agreement also calls for a follow-up summit to be held in South Korea in 2012.

“The summit is just a kickoff of what we think will be an intense process,” said Gary Samore, senior White House arms control coordinator, speaking to reporters following the summit. “We expect to have another round of expert meetings by the end of the year, in Buenos Aires. And I would expect to have two or three more before the Korean summit in 2012,” he said, adding that he predicts more concrete results at that summit. “We’ll be able to do better than we did this time because I think we’ve set a pattern—countries will want to come to the next meeting with even bigger and better ‘house gifts,’ ” Samore said, referring to commitments to secure materials made by several signatory countries during the summit.

Although arms control groups strongly support the summit, they believe success will be a “very, very difficult challenge,” said Kenneth N. Luongo, president of the Partnership for Global Security and a former senior arms control and nonproliferation adviser to the Clinton Administration and to members of Congress. “We have been working on this for 15 years, and it is not a four-year objective.

“All this is voluntary,” Luongo said, and it is unclear exactly what countries will have to do to secure their material. “There is no overarching document or treaty laying out what is expected of countries,” he said. “There needs to be a focus on putting together these disparate elements to secure this material into some kind of framework.”

Luongo also worries about funding to accomplish the summit’s goals, both within the Obama Administration and internationally. And, Luongo noted, the agreement does not address the “hundreds if not millions of medical and industrial radiological devices floating around in the world.”

But for Luongo, the bottom line is that “they did a good job at the summit by raising the political profile, which I think is really important. The challenge, however, is to move beyond what mechanisms exist now because there is a lot more that needs to be done to defeat this potential threat.” He pointed out that this is an issue without a country. “Arms control has its treaties and agreements; the nonproliferation treaty drives state weapons proliferation issues; but nuclear materials security doesn’t really have a home. The various elements need to be packaged together,” Luongo said.

He hopes the 2012 summit will help drive the agreement and may prove to be a forcing mechanism to make sure countries implement what they agreed to at this summit. “Maybe by then we can put together a new initiative to be endorsed at that summit,” Luongo said.

Pollution
Measuring microplastics in seafood
Pollution
Air pollution hurts honeybees
Greenhouse Gases
One carbon capture project stalls as another advances
Share X
To send an e-mail to multiple recipients, separate e-mail addresses with a comma, semicolon, or both.
Title: Locking Down Nuclear Material
Author: Jeff Johnson
Chemical & Engineering News will not share your email address with any other person or company.