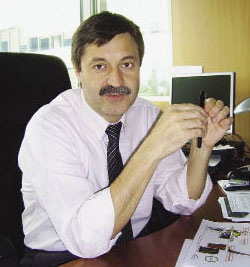 Ever since France’s Arkema spun out of oil company Total in 2006, it has sought to enlarge its acrylics franchise. One of its earliest acquisitions was that of specialty acrylic polymer maker Coatex in 2007. In January of this year, it completed the purchase of Dow Chemical’s acrylic acid plant in Clear Lake, Texas, and Dow’s North American UCAR acrylic polymer business.

The latest deal makes Arkema the third-largest player in the 4.5 million-metric-ton-per-year global acrylic acid market after number one BASF and number two Dow. But even as Arkema made headlines with big-ticket acquisitions, it more quietly worked to take technical leadership in acrylic acid research.

As early as 2004, Arkema had been working on a method to make acrylic acid from renewable resources, says Christian Collette, the firm’s vice president of R&D. Arkema had years of experience using oil from castor beans as a raw material for its Rilsan line of nylon 11 resins. “Since we are a major player in acrylic acid, we undertook a project to investigate making acrylic acid from bioresourced materials,” Collette says.

Although Arkema was left with plenty of by-product glycerin after it used the castor oil to make nylon, the firm “didn’t at first think of developing acrylic acid from glycerin,” Collette says. Instead, the earliest projects were based on the bacterial fermentation of sugars. “But the yield was low, and the bugs were sensitive to the final product. We decided to go to another process, a more classic process, built on heterogeneous catalysis,” he says.

The classic route to acrylic acid, Collette explains, starts with the petrochemical propylene, which is converted into acrolein and then into acrylic acid. Arkema sought to replace the propylene with glycerin, which is now available in large quantities in Europe as a by-product of converting oil from rapeseed into biodiesel. “What is nice about using glycerin is that you go through the same intermediate step to acrolein as you would with the classic process using propylene,” he notes.

But the firm ran into a number of problems. Although propylene and glycerin are both three-carbon monomers, physically they are very different. Glycerin is a viscous, polar liquid, and in contrast, propylene is a nonpolar gas. Also, any water attached to the glycerin molecule has to be separated out before it can be transformed into acrolein.

To convert the glycerin into acrolein, researchers needed to develop new catalysts. By March 2009, Arkema and HTE, a German high-throughput experimentation company, had developed and patented a family of them. The partners also came up with catalysts that allow Arkema to convert glycerin directly into acrylic acid without the usual intermediate step, Collette says.

In March of this year, Arkema took its biobased acrylics program to the next level, setting up an acrylics pilot unit at its R&D center in Carling, France.

Collette says Arkema chose Carling because it is the site of one of its three major acrylic acid installations. The other two are in Bayport, Texas, and at the recently acquired Clear Lake site. The firm has committed about $14 million over the next three years to fund research with academic partners.

Arkema is interested in developing both the direct glycerin-to-acrylic acid process and the route to acrolein. What Collette has in mind is one day setting up small acrolein units at customer sites where the chemical is a raw material for making cosmetics, flavors, and pharmaceuticals.

Today, acrolein is transported from large plants by train to customers that use it in relatively small quantities. But acrolein is “an inherently dangerous material,” Collette says. Shipping glycerin to a customer’s site and producing acrolein on-site is what he terms a “more sustainable” option.

Jaideep Raje, a senior analyst with market research firm Lux Research, points out that Arkema is not the only acrylics company trying to come up with a biobased process. Nippon Shokubai, the largest Japanese maker of acrylic acid, has also developed catalysts that convert glycerin into acrylic acid. The firm, which announced its own successes last October, plans to build a pilot plant in Himeji, Japan, where it also has an acrylic acid plant.

Some smaller companies, Raje notes, are working on alternative routes to acrylic acid. For instance, Waltham, Mass.-based Novomer is working on what it terms an “environmentally friendly” route to acrylic acid by combining ethylene oxide, carbon monoxide, and a catalyst developed by the firm to form pro­pio­lac­tone, which is then converted to acrylic acid. Another company, OPX Biotechnologies, based in Boulder, Colo., claims it has developed a cost-effective microorganism to ferment a sugar-based feedstock into acrylic acid.

And although the two largest makers of acrylic acid, BASF and Dow, have not publicly said they are developing biobased acrylic acid, Raje says that doesn’t mean they have no such projects under way. Both have significant biotechnology expertise, he notes.

Dow, in particular, “tends to be very pragmatic,” Raje says. If biobased acrylic acid is not feasible now, he believes that the company will keep an eye on new developments and work with academic groups and start-up companies when the time is right.

Glycerin is becoming increasingly available as government policies worldwide are favoring production of biodiesel. Glycerin has already found use in some chemical processes, such as one developed by Dow to make the aircraft deicing fluid propylene glycol (C&EN, March 26, 2007, page 9).

Raje figures that if government policies continue to favor biodiesel and if firms such as Arkema and Nippon Shokubai are successful, 10 years from now, glycerin will displace about 10% of the propylene used today to make acrylic acid. For companies like Arkema that have sustainability targets, however, “bioderived acrylic acid is critical,” he says. 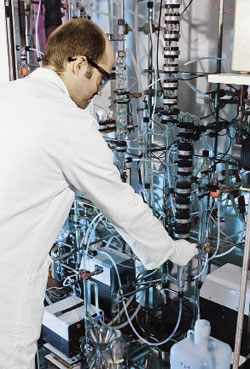 But Collette is no starry-eyed optimist. He realizes that glycerin can replace only a small amount of propylene. He says that glycerin-based acrylic acid could go to specialty uses in cosmetics or superabsorbent polymers for diapers, products for which con­sumers would be willing to pay a premium.

But if acrylic acid is produced from glycerin in large enough volumes, Collette argues, producers like Arkema should sell mixed streams of propylene-based and glycerin-based product. This way, producers could avoid setting up separate storage and handling operations that just might make glycerin-based acrylic acid cost-prohibitive.

Take, for example, electricity from windmills or solar power. Collette asks, “How do you distinguish electrons from windmills or photovoltaic panels from those produced conventionally?” It all goes into the same electrical grid. No one would produce an alternative grid solely to distribute green power, he contends.

To develop the market for sustainable raw materials, Collette says, customers should be open to getting mixed streams of bioresourced and conventional materials. “We should be allowed to sell 20% of our output as bioresourced acrylic acid if I can prove 20% of my product is bioresourced,” he says.

Lux Research’s Raje says that Arkema’s acrylics technology is “exciting from a science and innovation point of view.” But don’t expect to see commercial quantities of biobased acrylic acid for at least another five years, he cautions.