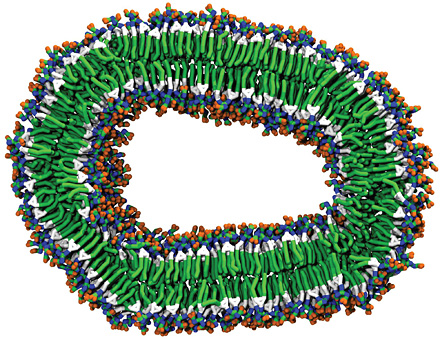 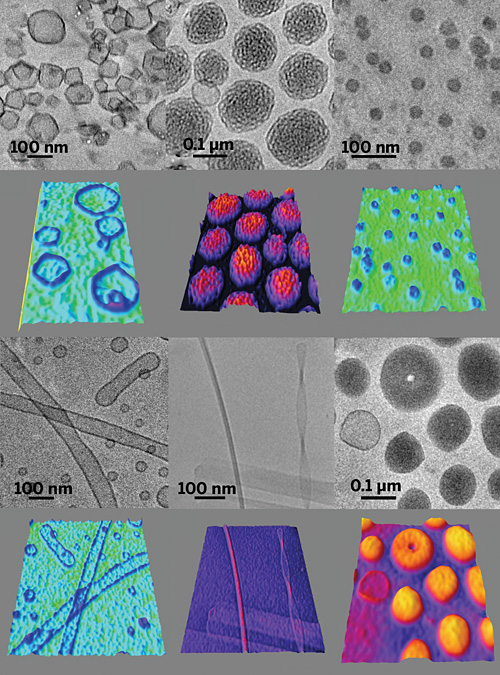 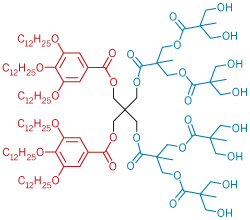 The new nanostructures form from “Janus dendrimers”—dendrimers (repetitively branched molecules) that branch out from a point and are amphiphilic (polar on one side and nonpolar on the other). Chemistry professor Virgil Percec of the University of Pennsylvania and coworkers report in Science that a new family of vesicles, tubes, disks, and other shapes—which they call “dendrimersomes”—self-assemble from the Janus dendrimers in water (2010, 328, 1009).

Dendrimersomes can act as hosts for a variety of guest molecules and could therefore have widespread applications as delivery vehicles for drugs, genes, imaging compounds, diagnostic agents, cosmetics, and other substances.

“This is truly groundbreaking work,” says Donald A. Tomalia of Central Michigan University, who discovered dendrimers in 1979. “It’s the first step toward a huge family of dendrimersome structures. I can see an endless number of libraries that one can construct by varying the structures of Janus dendrimers, so this paper is just the tip of the iceberg.”

Dendrimersomes are stable for longer periods of time, are highly uniform in size, have the proper dimensions to accommodate membrane-spanning proteins, and are easily functionalized.

Self-Assembly
Credit: Courtesy of Virgil Percec
Self-assembly of a dendrimersome, from a homogenoeous solution of Janus dendrimer in water into a vesicle.

Several groups have been studying Janus dendrimers for nearly two decades, although they were so named more recently. In the new study, Percec and coworkers synthesized more than 100 Janus dendrimers, screened them for supramolecular self-assembly in water, and found that all adopted useful shapes.

The technique is reminiscent of the versatility with which “globular proteins can assemble into viral capsids and other complex biological nanostructures,” says Karen L. Wooley, a polymer chemist and nanomedicine expert at Texas A&M University.

Jan C. M. van Hest, a specialist in bioinspired materials at Radboud University Nijmegen, in the Netherlands, says it’s noteworthy that “dendrimersomes can be tailor-made with a high level of size control. Creating monodisperse vesicles is always difficult, but seems to be easier with Janus dendrimers.”

Bilayer
Credit: Courtesy of Virgil Percec
Self-assembly of the bilayer part of a vesicle from an aqueous solution of Janus dendrimer.

Dendrimersomes “are truly unique and highly differentiated from traditional liposomes and polymersomes, which are very fragile and very polydisperse,” Tomalia says. “They are incredibly robust and very monodisperse, and they allow you to do chemistry on the surface.” Tomalia believes it will be possible to select Janus dendrimers with specific sizes, shapes, and surface chemistries and then use them as building blocks to create dendrimersomes with designed structural and functional characteristics.

Materials
How Researchers Formed A Pure, Chiral Crystal From Mixed Ingredients
First Metal-Organic Framework Made With Protein
Materials
Two-Faced Dendrimers Form Onionlike Vesicles
Share X
To send an e-mail to multiple recipients, separate e-mail addresses with a comma, semicolon, or both.
Title: Dendrimersomes Debut
Author: Stu Borman
Chemical & Engineering News will not share your email address with any other person or company.