EFFECTS UNKNOWN
[+]Enlarge
Credit: Newscom
Airplanes have sprayed almost 600,000 gal of chemical dispersants on Gulf oil slicks to date; BP engineers have now begun applying them underwater at the source of the leak. 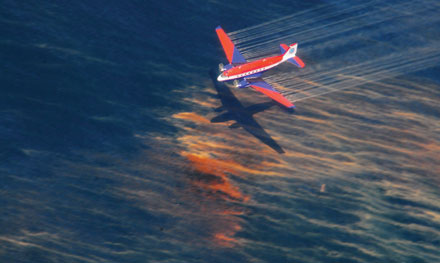 Credit: Newscom
Airplanes have sprayed almost 600,000 gal of chemical dispersants on Gulf oil slicks to date; BP engineers have now begun applying them underwater at the source of the leak.

To combat the Deepwater Horizon oil spill, BP engineers on May 17 began continuously applying dispersants deep underwater to oil leaking from a broken pipe 5,000 feet below the Gulf of Mexico's surface. This new method and the unprecedented volume of dispersants already applied at the surface by spraying from airplanes have sparked concerns about the long-term environmental impact of dispersed oil in the Gulf.

The Environmental Protection Agency approved the subsurface technique on May 15 in hopes of preventing leaking oil from reaching the surface and eventually washing ashore and damaging the Gulf's fragile coastal wetlands.

"We believe that the underwater use of dispersants could lessen the overall impact of the spill," EPA Administrator Lisa P. Jackson said when announcing the approval.

Dispersants are a mixture of solvents and surfactants that act like dish soap: They help form smaller oil droplets that sink into the water column where marine microbes degrade them. To apply the dispersants underwater, BP engineers feed a thin tube that pumps the chemical mixture into the leaking riser pipe with a remotely operated underwater vehicle.

Preliminary tests reveal that effective underwater injection of dispersants requires smaller volumes than do surface applications, Jackson told members of the House of Representatives Transportation Committee on May 19. But she added that the total amount of dispersant applied to the surface has topped 600,000 gal over the past month.

Observers such as Rep. Edward Markey (D-Mass.) have criticized this high use of dispersants and the toxicities of the two being used in the Gulf: Corexit 9500 and Corexit 9527. To address the toxicity issue, a May 20 EPA directive required BP to find an alternative, less toxic dispersant.

Others say this concern is misguided. "The dispersants themselves aren't the drivers of toxicity," says University of Maryland aquatic toxicologist Carys L. Mitchelmore. "It's the dispersed oil."

BP is required under an EPA directive dated May 10 to collect during subsurface applications, data that would monitor the effects of this toxic dispersed oil on marine life. One of the important pieces of data that EPA calls for BP to gather is the water's dissolved oxygen content, says geochemist Edward B. Overton of Louisiana State University, Baton Rouge.

Because oil droplets enhance microbial degradation and microbes consume oxygen as they feed on the oil, Overton says, a large influx of dispersed oil may deplete oxygen from water. In the EPA directive, officials set a threshold dissolved oxygen concentration of 2 mg/L as a trigger to shut down subsurface use of dispersants.

"That's a very reasonable criterion," says Jeffrey Short, a chemist with Oceana, a Washington, D.C.-based environmental group. "If the oxygen content of the water goes below that, you can start killing organisms."

The EPA directive also requires BP to test whether water samples collected around the dispersion site are toxic to rotifers, which are standard test microorganisms in water quality tests. These results also may be used as a shutdown criterion.

But these tests examine only one aspect of oil's environmental impact, experts say: its acute toxicity, or ability to kill organisms quickly. "That will tell you how lethal the oil is right there and then," Mitchelmore says. "It won't tell you anything about sublethal effects, long-term effects, or delayed effects." Such chronic toxicity can affect reproduction and embryonic development of organisms and can lead to metabolic and behavioral changes. To detect these effects, Mitchelmore says, officials must first monitor the dispersed oil's location and concentration over time. BP and government agencies have come under fire in recent days for not making public the results of their monitoring efforts.

But even with those data, scientists still lack basic long-term information on dispersed oil's impact on marine organisms, especially those living at depths, says Nancy Kinner, codirector of the University of New Hampshire's Coastal Response Research Center, in Durham. Nor are there any data to predict the impact on marine life of the unprecedented use of dispersant, Kinner and Mitchelmore note.

The 600,000 gal of dispersants deployed so far is four times greater than amounts used on any previous spill, Kinner says. "No one ever envisioned using dispersants in these large quantities," she says. The consequences of that unprecedented volume of dispersants and the dispersed oil it has produced remain unknown. "We're making an experiment."