Dip-and-read diagnostics strips are a boon to diabetics 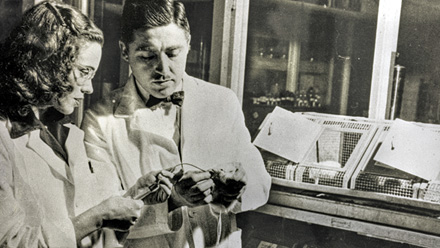 The American Chemical Society recently honored the scientific fruits of the extraordinary partnership of Helen M. and Alfred I. Free as its 66th National Historic Chemical Landmark. The designation marked the Frees' 1956 development of Clinistix, the first dip-and-read diagnostic test strips for monitoring glucose in urine. Ceremonies were held on May 1 in Elkhart, Ind., where the couple spent their careers at Miles Laboratories and Bayer HealthCare. 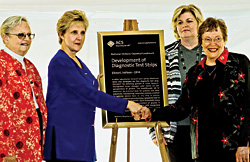 Credit: Jill Perry
Hayes (from left), Charpentier, Boehler, and Free on stage at the landmark ceremonies.

Invention of the test strips, still marketed as Clinistix, required enzymes and ingenuity, which the Frees had in abundance. Clinistix are thin strips onto which is affixed a little pad impregnated with two enzymes and a chromophore.

When dipped in a urine sample, the first enzyme, glucose oxidase, turns any glucose present into gluconic acid and hydrogen peroxide. The amount of H2O2 formed is determined by using a second enzyme, peroxidase, which catalyzes the oxidation of the chromophore, o-toluidine, to make a colored product. The intensity of the resulting blue-green color reflects the amount of peroxide, and hence, of glucose, in the sample. Comparison with a standard chart on the Clinistix container lets users determine the approximate level of glucose in the urine.

This development was revolutionary because it enabled people with diabetes to monitor their glucose level at home, saving them a trip to the doctor. Opening the ceremony, Bayer HealthCare chemist Daniel Brown, who serves as chair of the ACS St. Joseph Valley Section, enthusiastically told attendees it would be hard to imagine a chemical development to better illustrate the ACS vision: "Improving people's lives through the transforming power of chemistry."

Alfred Free, who died in 2000, was mentioned with great affection many times at the ceremonies, which attracted about 150 chemists and local residents. All nine of the Frees' children were there.

"Nearly half a million people in Indiana have diabetes," said speaker Lynda Sardeson, program coordinator for the Elkhart General Hospital Diabetes Program. She delivered a talk on earlier testing procedures and the importance of glucose monitoring.

"I am one of those half million Indiana Hoosiers who do benefit from Al and Helen's work," said Dick Moore, mayor of Elkhart. "Because of their work and what has gone on since, at 76 years of age, I'm able to serve as mayor of the 12th largest city in Indiana. Not everybody would get excited about that, but it means a lot to me," he chuckled.

After Rep. Joe Donnelly (D-Ind.) said a few words, Bonnie A. Charpentier, chair of the ACS Board of Directors, told attendees that the event was "a particular joy" for her "because I am honored to consider Helen a friend as well as a role model whom I have long admired." She noted that Clinistix was joining other landmark-recognized products, including nylon, streptomycin, Tide laundry detergent, and Scotch tape.

Charpentier then invited to the podium Helen Free, ACS Board Director Janan M. Hayes, and Patsy Boehler, executive director of ETHOS, an organization promoting science education for children and which currently occupies part of the building where the Frees invented Clinistix.

As the commemorative plaque was unveiled, Charpentier read the engraved text: "A Miles Laboratories research team led by Alfred and Helen Free developed the first diagnostic test strip—Clinistix—for detecting glucose in urine. Reagent-impregnated strips changed color based on the concentration of glucose. This breakthrough led to additional dip-and-read tests for proteins and other substances. Subsequently, researchers devised a method to combine several tests on one strip to provide healthcare professionals with simple, immediate tools to aid in the detection of disease. These innovations, along with instrument-based measurement of glucose in fingertip blood, provided patients with an inexpensive means to aid in the management of diabetes and kidney disease, significantly improving their quality of life."

Afterward, noting that Helen Free was "a little small to hang a plaque on," Charpentier did the next best thing—she gave the delighted honoree a T-shirt with the image of the landmark plaque, which she wore with great panache at the reception and dinner that followed.