HOT ZONE
[+]Enlarge
Credit: Herman Cho/PNNL
The yellow tape and chain identify this NMR instrument at PNNL as one that handles radioactive materials. 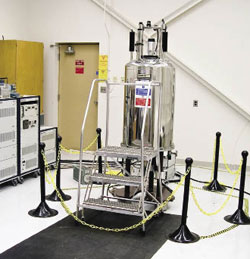 Credit: Herman Cho/PNNL
The yellow tape and chain identify this NMR instrument at PNNL as one that handles radioactive materials.

Nuclear magnetic resonance spectroscopy, that staple technique for determining chemical structures, has historically seen limited use for studying nuclear materials, whether fuel or waste. The stumbling blocks were safety—principally because of a fear of radioactive contamination—and utility—because the radioactive elements in nuclear materials are mostly paramagnetic and tend to yield broad spectral lines that are difficult to interpret.

With the renewed interest in nuclear power and an increasing need to manage nuclear waste streams, however, several institutions are now developing additional NMR capacity dedicated to radioactive materials. The advantage over traditional techniques (such as scintillation counting) for studying radioactive materials is that NMR can provide detailed information on the chemical species and dynamics of a system.

Greater use of NMR to analyze nuclear materials could also foster basic research into the properties and chemistry of f-block elements—actinides are used as nuclear fuel, and both actinides and lanthanides are found in nuclear waste. “The chemistry of these elements is young, only about 50 years old compared with a few hundred for transition-metal chemistry,” says Melissa A. Denecke, a chemistry professor at Karlsruhe Institute of Technology (KIT), in Germany. “There’s still a lot of room for experimental chemists to explore.”

In the U.S., limited use of NMR to study radioactive complexes began a couple of decades ago. In the early 1990s, researchers at Los Alamos National Laboratory (LANL) used the technique to study carbonate and nitrate actinide complexes, with an eye toward understanding how they might migrate in the environment if they were released from the Waste Isolation Pilot Plant in Carlsbad, N.M., or the proposed nuclear waste repository at Yucca Mountain, in Nevada. “LANL had access to oxygen-17, nitrogen-15, and carbon-13—a lot of nice NMR-active nuclei that we could incorporate into our molecules and look at using NMR,” says David L. Clark, an LANL fellow and director of the G. T. Seaborg Institute for Transactinium Science.

Researchers at LANL are now heavily focused on trying to understand the molecular species involved in ion-exchange resins to separate nuclear waste. “There are lots of discussions of what the actual stoichiometry is of plutonium or thorium in nitric acid solution,” Clark says. The lab also uses NMR to study the basic coordination chemistry and geometries of actinide species.

LANL does not have any NMR instruments dedicated to studying radioactive samples. Instead, scientists studying such materials must safely contain their samples for use in general-purpose instruments, Clark says. For liquids, this involves first putting a sample inside a Teflon tube, which is sealed either with a plug or by melting the Teflon, a process akin to sealing a glass tube with a flame. The Teflon tube is subsequently inserted into a glass NMR tube, which is also sealed with a plug or a cap or by flame. The tubes are then put into a sample container, which in turn is placed into a Department of Transportation-approved shipping container before the entire package is transferred to the NMR instrument, where the tubes are unpacked for analysis.

Separator
[+]Enlarge
Credit: Jean-François Desreux
Ytterbium complexed to a bis(triazinyl) terpyridine ligand is being evaluated for nuclear waste partitioning (Yb is pink, N is blue, C is gray, and H is white). 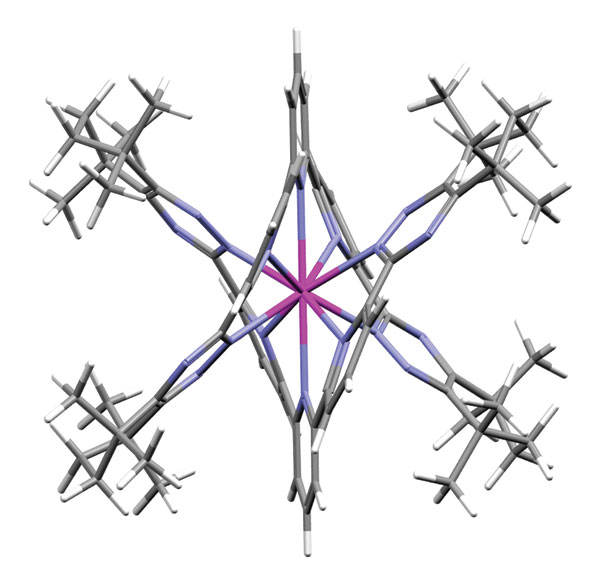 Credit: Jean-François Desreux
Ytterbium complexed to a bis(triazinyl) terpyridine ligand is being evaluated for nuclear waste partitioning (Yb is pink, N is blue, C is gray, and H is white).

Clark notes that researchers also have to be careful not to let the samples sit for too long. Some species, such as those containing americium, “are so radioactive that in solution the α-particle radiolysis generates hydrogen gas and builds up pressure in the tubes,” he says. As soon as spectra have been taken, the tubes are transported back to the lab and reopened in a glove box to release the gas. “We have had a few tubes over the years that, when we went to score them to break them open, there’s been a little pop,” Clark adds.

Other institutions have instruments dedicated to the analysis of radioactive samples. Pacific Northwest National Laboratory (PNNL), for example, has NMR instruments, including a new one purchased with funds from the American Recovery & Reinvestment Act of 2009, located in special radiological facilities. Even with the dedicated instruments, however, samples are doubly or triply contained in tubes to guard against contamination.

A few years ago, experiments at PNNL examined the radiation damage to plutonium-doped zircon (ZrSiO4) over a period of 20 years. This material had been proposed as one in which plutonium could be immobilized once it’s separated from nuclear waste streams. Using 29Si NMR, PNNL senior research scientist Herman Cho and laboratory fellow William J. Weber, along with University of Cambridge chemistry professor Ian Farnan, found that each α-emission event displaced 5,000 atoms in the zircon, rather than the previously estimated 1,000 to 2,000 atoms (Nature 2007, 445, 190; C&EN, Jan. 15, 2007, page 45). That meant that crystalline zircon would become amorphous in a mere 1,400 years—a far cry from the 250,000 years desired for long-term storage of radioactive materials.

PNNL also does basic research. A recent study used 17O NMR to look at the structure of the uranyl ion, UO2 2+, in two different environments: (NH4)4UO2(CO3)3 and UO2CO3 (J. Chem. Phys. 2010, 132, 084501). The work, Cho says, served to calibrate theoretical models of the U–O bond. “When you go to the heavier elements in the periodic table, the electronic structure becomes increasingly complicated,” Cho says. “There are more electrons, including 5f electrons, and the whole theoretical description has to become more sophisticated. It really pushes the limits of modern computational chemistry.”

In Europe, NMR studies of nuclear material focus primarily on waste reprocessing, which involves extracting radioactive elements for reuse or storage. Jean-François Desreux, an emeritus professor of chemistry at the University of Liege, in Belgium, notes that the lanthanides and actinides that must be separated in nuclear waste streams tend to have the same charge and similar ionic radii. “They’re very difficult to separate, and that’s the main problem in nuclear waste treatment,” Desreux says.

As part of an international research project called Actinide Recycling by Separation & Transmutation, Desreux is studying bis(triazinyl) pyridines, a class of compounds that work well as ligands to separate actinides from lanthanides (Dalton Trans., DOI: 10.1039/b924988e). The aim is to determine the structures and stoichiometries of ligand complexes with lanthanides and actinides as well as why the compounds are so successful at separating the two. Although some of the lanthanide complexes of interest, such as those involving gadolinium, do have extremely broad NMR peaks, sometimes turning to an actinide analog improves the resolution. Curium can substitute for gadolinium, and neptunyl and plutonyl complexes also have narrow lines, making NMR studies feasible. “Hopefully, this will be useful for developing new ligands for waste retreatment,” Desreux says.

Typically, nuclear waste separation technology is developed through engineering methods, adds Ingmar Grenthe, an emeritus professor of chemistry at the Royal Institute of Technology (KTH), in Sweden, who also studies nuclear waste reprocessing. “You do a systematic variation of parameters, and then you try to optimize the process, and this is very expensive,” Grenthe says. “It seems to me that a better option is to try to understand what lies behind the experimental observations.” He notes that NMR can yield information about the composition and quantity of the compounds in both the aqueous and organic phases of a separation.

Grenthe, who has been working on β-diketone complexing ligands for nuclear waste separation, also highlights the ability to use NMR to study the dynamics of waste partitioning. “You have chemistry in the aqueous phase and chemistry in the organic phase, and these are different,” he says, adding that little is known about chemistry at the phase-transfer boundary. All of these factors play into developing and optimizing separation technology.

A new NMR facility for radioactive materials being built at KIT will strengthen the resources available in Europe to study waste partitioning and will also be used for basic studies of binding and reactivity of actinides, Denecke says. She believes that cation-anion clusters incorporating ligand-actinide complexes and nitrate ions from the nitric acid used to dissolve fuel rods are involved in waste separation, and she is looking forward to exploring this idea experimentally.

Adjacent to KIT is the Institute for Transuranium Elements (ITU), one of seven research institutes of the European Commission’s Joint Research Centre. A new NMR instrument is also being installed there, but whereas the KIT facility will focus on solution studies, the one at ITU will concentrate on solid-state experiments. It will be unique in that its magnet will be suspended about 6 feet off the ground, with a glove box underneath. A tube from the glove box will extend up through the bore of the magnet. This setup will enable magic-angle-spinning experiments—in which solid samples are spun at a frequency of up to 70 kHz—to give high-resolution spectra of powders, Cambridge’s Farnan says.

To date, such experiments have been done only on samples encased in ceramics or polystyrene to ensure containment. The integrated glove box will allow researchers to work with powders without fear that material will escape and contaminate the instrument or the room in which it sits. The experiments will be particularly useful, Farnan says, for studying radiation-damaged materials that might have a mixture of amorphous and crystalline regions, as well as future nuclear-fuel candidates.

Ultimately, the increased interest in and resources available for studying lanthanides and actinides by NMR will provide a lot of basic information about the f-block elements. “Lanthanide and actinide chemistry is very rich,” PNNL’s Cho says, and the expanding ability to explore it will open the field further.