Taking A Trip Down Sensory Lane 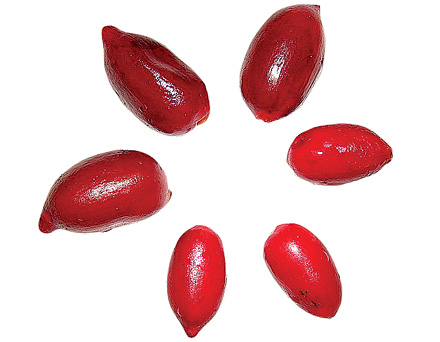 About a month ago, a few friends and I attended a "flavor tripping" event at a bar in downtown Washington, D.C. This type of social gathering, part of a recent food-tasting trend, is made possible by a West African berry, Synsepalum dulcificum, aka the MIRACLE FRUIT.

Upon entering the party and forking over $12, we were each handed a frozen berry and instructed to put it in our mouths, carefully remove the skin with our teeth, and swirl the fruit around on our tongues for a few minutes. Doing so, according to my written directions, would "allow the gylcoprotein [sic] to bind to your taste buds," thus making sour foods taste sweet.

That unfortunately misspelled glycoprotein, a component of the berry that is dubbed miraculin, is believed to work like this: When the near-tasteless fruit is swirled on the tongue, the protein binds to the tongue's sweetness receptors. The receptors then become activated in the presence of acids found in sour foods. The effect lasts around 30 minutes to an hour. As advertised, chomping on a lemon wedge became a pleasurable experience, and grocery-store-quality strawberries tasted like the best strawberries I'd ever had.

Feeling adventurous, I followed up the fruit with a big swig of soy sauce, which, to my dismay, tasted like a big swig of soy sauce. Grabbing a delicious lime wedge to offset that failed experiment, I pondered the genius marketing ploy that just got me to spend $12 to stuff my face with bar garnishes and wash it all down with condiments.

But it turns out that miracle fruit might be more than just a money-making gimmick and party trick. As the story goes, the berry was first documented in the 1700s by French explorer Chevalier des Marchais, who noted that West African tribes would consume the fruit before eating sour foods.

And modern researchers have been interested in the fruit's taste-altering abilities for some time. The berry was introduced to the U.S. in the early 1900s by Department of Agriculture botanist David Fairchild. In 1968, Florida State University biologists Kenzo Kurihara and Lloyd M. Beidler isolated the active protein (Science 1968, 161, 1241). But it wasn't until 1989 that a team of researchers in Japan sequenced it (J. Chem. Biol. 1989, 264, 6655).

Attempts to commercialize the protein as a sweetness enhancer were stymied in the 1970s by the Food & Drug Administration, which denied its approval as a food additive. Theories abound that big sugar and artificial sweetener lobbies conspired to shut down miraculin.

FDA approval notwithstanding, other roadblocks have stood in the way of the mass production of miraculin. Historically, it has been difficult and costly to extract and purify the protein, but researchers from the University of Tsukuba, in Japan, have spent the past few years trying to overcome the supply problem. They've shown that it's possible to boost the availability of miraculin by producing it in transgenic lettuce (FEBS Lett. 2006, 580, 620) and tomatoes (Plant Biotechnol. J. 2007, 5, 768). In April, researchers from the same university reported a closed cultivation system to mass-produce miraculin-containing tomatoes (J. Agric. Food Chem., DOI: 10.1021/jf100414v).

Why go to all that trouble for miraculin? Aside from being a possible aid to dieters, taste-altering applications have been suggested for diabetics and cancer patients, for whom treatment sometimes causes foods to have a metallic taste.

On an even larger scale, some people believe that the fruit could be just what the world needs to solve its hunger problems. In an April episode of the show "Future Food," on cable network Planet Green, chef and cohost Homaro Cantu touts the fruit's protein as a possible hunger panacea, claiming to transform plentiful yet bad-tasting cacti, flowers, and weeds into palatable meals.

Whether the miracle fruit will save the world is yet to be seen, but for now, it's making my happy hour a little sweeter.

Natural Products
An ancient remedy might do what no-calorie sweeteners could not
Business
Artificial Sweetener Producers Hurt By Chinese Competition
Food Science
The Case Against Sugar
Share X
To send an e-mail to multiple recipients, separate e-mail addresses with a comma, semicolon, or both.
Title: Taking A Trip Down Sensory Lane
Author: Kimberly R. Twambly
Chemical & Engineering News will not share your email address with any other person or company.