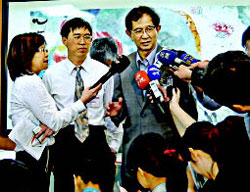 Yuan T. Lee says that when he graduated from high school he wanted to do two things: be a good scientist and change the world.

Lee spent much of his career as a chemistry professor at the University of California, Berkeley, with a joint appointment at Lawrence Berkeley National Laboratory. He left UC Berkeley in 1994 to become the president of Academia Sinica, in Taiwan, a post he held until 2006.

As for changing the world, Lee will be focusing on that goal as president of the International Council for Science (ICSU). Last month, Lee took his place on the ICSU executive board as president-elect, after being voted into the position at an ICSU meeting in Mozambique in 2008. He will succeed French physicist Catherine Bréchignac as president of the organization in October 2011.

ICSU was founded in 1931 as the International Council of Scientific Unions. Its membership includes national and international scientific organizations, including the U.S. National Academy of Sciences. The U.S. is also active in ICSU through unions such as the International Union of Pure & Applied Chemistry. The American Chemical Society is not an ICSU member.

ICSU’s mission is to strengthen international science for the benefit of society. ICSU works to identify global issues of importance, such as environmental hazards and global warming; to facilitate interaction among scientists internationally; and to serve as a conduit for information exchange between the scientific community and governments, industry, and the general public.

One of ICSU’s recent projects was the International Polar Year, in 2007–08. Working with the World Meteorological Organization, ICSU established international scientific programs that resulted in more than $1 billion spent on scientific research in the Arctic and Antarctic, as well as public outreach efforts.

For his part, Lee wants to use his term as ICSU president to focus on sustainability—in particular, on stemming waste and overconsumption of natural resources.

Lee is influenced, he says, by his experiences of growing up in Taiwan toward the end of World War II, during Japan’s occupation of the country. When Lee should have been in first and second grade, he was instead living in the mountains, where “we depended on sunshine to satisfy everything we needed,” he says. Now, he notes, more than 99% of Taiwan’s energy comes from imported fossil fuels.

Lee quotes Mahatma Gandhi’s answer to the question of whether a liberated India would follow the path of Great Britain’s development: “It took Britain half the resources of the planet to achieve this prosperity. How many planets will a country like India require?” The goal of developing countries, Lee says, should not be the “American dream” of a big house and a cheap car—things that he sees as symbols of excessive consumption of natural resources.

Lee would like to see not-yet-overdeveloped countries leapfrog over overdeveloped ones and focus, for example, on implementing renewable or clean energy systems now so they won’t have to retool down the road. ICSU can help with that, he says, by facilitating the transfer of knowledge and expertise and by seeking funding for sustainability research.

The organization is currently working with the International Social Science Council (ISSC) to prioritize research problems directed at sustainability. Using input from the scientific community, ICSU and ISSC have developed five “grand challenges in global sustainability research”: improve the usefulness of environmental forecasts, in particular by including projected impacts on economies and food security; develop environmental and social observation systems to manage environmental change; determine how to anticipate, avoid, and cope with dangerous environmental change; determine the institutional and behavioral changes that can best ensure global sustainability; and develop innovative technology—such as ways to increase food production while reducing greenhouse gas emissions and protecting biodiversity—to achieve global sustainability. The next step is to determine the best strategic approach to address the challenges.

Ultimately, Lee emphasizes, the big problems faced by humanity are global in nature. Food safety and security, emerging infectious diseases, global warming and ecosystem changes, and waste issues are all problems that cross borders. Having one country build a sustainable infrastructure won’t be a panacea. The problem “is like coupled equations,” Lee says. “Unless we solve them simultaneously for the whole world, we will not find any solutions.”