U.S. students do research work in Thailand through a National Science Foundation program

COLLABORATION
[+]Enlarge
Credit: Rebecca Braslau
Rivers (left) spent the summer of 2002 as a ThaiREU student with Kongsaeree at Mahidol University. 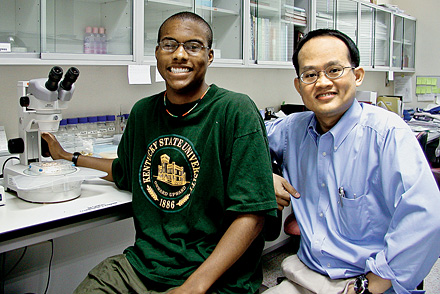 Credit: Rebecca Braslau
Rivers (left) spent the summer of 2002 as a ThaiREU student with Kongsaeree at Mahidol University.

Most undergraduate students heading to a summer research job don't expect elephants to be part of their experience. But for the eight students who are selected for the annual National Science Foundation research fellowship ThaiREU (Thai Research Experience for Undergraduates), exotic animals, white-water-rafting trips, and visits to ancient Buddhist ruins are just what they will get—on the weekends at least. Weekdays find the students working on organic and bioorganic chemistry projects at one of three research institutes in and around Bangkok: Chulalongkorn University, Mahidol University, and the Chulabhorn Research Institute.

ThaiREU student projects have ranged from functionalizing peptide amino acids for medical diagnostics to fabricating ion-selective electrode membranes and have resulted in publications in journals including Organic Letters and the Journal of Organic Chemistry.

The 10-week program takes place from June through August. ThaiREU is the first of several NSF fellowship programs that fund undergraduate students to work abroad; another program brings undergrads to Beijing. The Thai program began in 2002 after Rebecca Braslau, a chemist at the University of California, Santa Cruz, noticed a call from NSF in 2000 for proposals to start an undergraduate research program in East Asia. The agency wanted to improve connections in that area because the region was "of strategic importance" and had a "strong cadre of scientific talent," the NSF call for proposals notes.

The starting date of the 2010 program has been delayed because of the recent political demonstrations and unrest in Bangkok, but ThaiREU organizers are still hoping it will run. "I'm holding my breath and hoping the crisis is resolved in the next few weeks," Braslau says. "However, it may be necessary to cancel this year's program, given the political upheaval and violence erupting on the streets of Bangkok." Organizers are monitoring the situation and may place students only at research facilities outside the downtown core.

Under normal circumstances, "Thailand is an ideal place for an international REU program in chemistry," Braslau says, partly because one of the Thai princesses, Chulabhorn Walailak, has a Ph.D. in organic chemistry and heads a natural products research institute. "Historically, organic chemistry in Thailand blossomed due to the rich diversity of bioactive compounds found in Thai tropical plants," and natural product chemistry is still a major research focus in the country, Braslau adds. More recently, she explains, the Thai government has funded modern instrumentation and also sponsored Thai students abroad. These students have returned as professors to set up "world class" labs in the country.

Braslau runs the ThaiREU program from the U.S. side, while Poonsakdi Ploypradith, a chemist at the Chulabhorn Research Institute, organizes the program from the Thai side. "The students who come are very bright and normally perform really well—any lab in the U.S. could benefit from having them," Ploypradith says. But one extra perk for Thailand is that the local students benefit from having native English speakers in the lab to communicate with, he says. 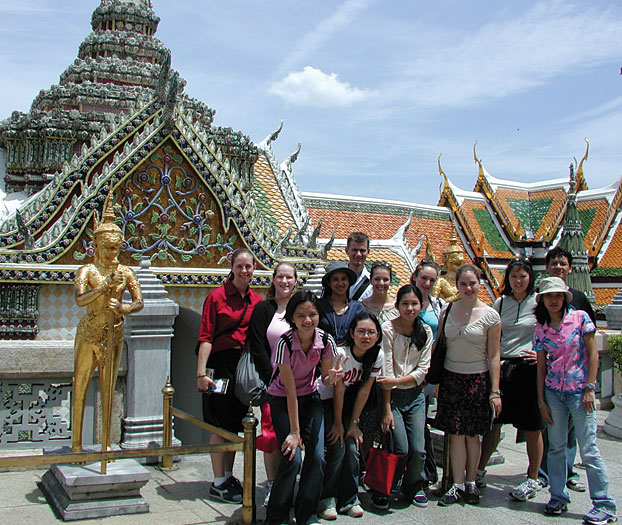 Credit: Rebecca Braslau
The ThaiREU 2003 team takes a tourist break from the lab.

U.S. students are enthusiastic about the program. "The ThaiREU program was an amazing experience that changed my research and career goals," says Robert C. Rivers, who participated in the program in its inaugural year and now works for the National Institutes of Health. While in Bangkok, Rivers worked in the field of protein science with Palangpon Kongsaeree at Mahidol University. The experience motivated him to pursue a Ph.D. focusing on protein folding and misfolding in Chris Dobson's lab at the University of Cambridge, Rivers adds.

"The program was even better than I'd expected. It's extremely well organized, and the professors and students we worked with were incredibly kind and caring people," says Jordan Calmes, now a senior chemistry student at the University of Wyoming, who spent the summer of 2009 in Bangkok working on copper-mediated, microwave-assisted C–N bond formation. But it's "the cultural component of this program that really sets it apart," she says.

Petting tigers, exploring beautiful beaches and palaces, getting caught in Bangkok street traffic—which sometimes includes elephants—tasting exotic dishes and then accidentally buying kilograms of unheard-of fruits are among the experiences ThaiREU students describe. Then there are the idiosyncrasies of doing chemistry in a tropical country, such as the short-sleeved lab coat, says Ryan Babbush, who is studying chemistry at Carleton College, in Minnesota, and participated in the 2009 program.

Some students don't just observe the culture, they plunge right into it. Take Josh Parks, for example. The University of Portland, in Oregon, biochemistry major not only characterized compounds from the Thai plant Cordia globifera last summer, but he also learned traditional Thai dancing well enough to perform in a musical during an annual competition between Bangkok graduate schools.

Dancing aside, ThaiREU provides science students an opportunity for international travel, which "doesn't always fit into your schedule when you're studying science," Calmes says. Plus, she says, after reading books such as "A Short History of Nearly Everything," Calmes is convinced "that all scientific undertakings should also be adventures."