In Europe, new refrigerants will be fluorocarbons,  not carbon dioxide 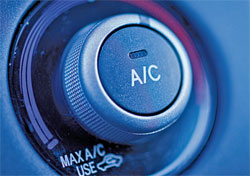 Until recently, carbon dioxide had been a strong candidate to displace hydrofluorocarbon (HFC)-134a as the refrigerant of choice for a new generation of automotive air conditioners. HFC-134a has a global-warming potential (GWP) 1,340 times greater than an equivalent amount of CO2, and under pending European Union regulations, its use in new model cars will be banned beginning next year. Only fluids with a GWP less than 150 will be allowed; CO2, the iconic global-warming gas, has a GWP of 1.

However, after a hard-fought battle between environmental groups and fluorochemical makers Honeywell and DuPont, automakers in the EU and elsewhere are about to adopt a new fluorine-based refrigerant, hydrofluoroolefin (HFO)-1234yf (2,3,3,3-tetrafluoropropene), which has a GWP of 4. The coup de grâce came last November when a multiyear research study, concluded under the auspices of the automotive engineering organization SAE International, determined that HFO-1234yf can be safely used as “the global replacement refrigerant.”

Environmental groups opposing HFO-1234yf admit the chemical makers have outflanked them. Nina Burhenne, a spokeswoman for the Alliance for CO2 Solutions, a group of environmental organizations, acknowledges that the campaign to get carmakers to adopt CO2 refrigerants is “inactive” now, especially since German automakers “made a U-turn” a few months ago and endorsed HFO-1234yf.

The influential German Association of the Automotive Industry, known by its German initials VDA, promised back in 2007 to ad0pt CO2. But recent press reports indicate that VDA, which represents carmakers such as Volkswagen, Audi, and Mercedes Benz, quietly gave up on CO2 in favor of the drop-in solution that HFO-1234yf offers. Use of CO2 would require adoption of costly new equipment. VDA would not discuss the group’s about-face, despite repeated phone calls and e-mails.

DuPont and Honeywell are now moving to ensure adequate supplies of HFO-1234yf will be available for European cars beginning in 2011. In May, the two formed a joint venture to build a world-scale HFO-1234yf plant at an as-yet-undetermined site. Pilot facilities at both Honeywell and DuPont, as well as an intermediate-scale facility now under construction in China at DuPont affiliate Changshu 3F Zhonghao New Chemical Materials, will meet EU requirements in the near term.

Ray K. Will, a senior consultant at business research publisher SRI Consulting, theorizes the two firms teamed up to share not just the costs of building a new plant but also the environmental and regulatory risks associated with bringing the new chemical to market. He notes that the U.S. Environmental Protection Agency has yet to approve HFO-1234yf. Concerns about the effect of trifluoroacetic acid, a breakdown by-product of HFO-1234yf, on aquatic organisms may derail approval, he suggests.

If HFO-1234YF survives, “it could be a real moneymaker for the patent owners Honeywell and DuPont,” Will says. However, if it doesn’t succeed, “CO2 is waiting in the wings,” since manufacturers of compressors and other components already have done most of the development work on CO2-capable systems.

Honeywell professes to be unperturbed by the lack of EPA approval so far. “We believe EPA is working with original equipment makers on approval and wants to get it right,” says a Honeywell spokeswoman. Although HFO-1234yf is mostly a drop-in replacement for HFC-134a, the newer refrigerant is what Tom Morris, director of commercial development at Honeywell, describes as “mildly flammable.” HFC-134a and CO2 are not flammable.

According to Thierry Vanlancker, DuPont’s fluorochemical business director, the flammability issue is a concern for EPA and perhaps a reason why the regulatory agency hasn’t yet okayed it. Since 1995, Vanlancker says, EPA has had a rule against using flammable refrigerants in cars. “But given the environmental benefits of HFO-1234yf, EPA may modify that ruling,” he says.

Flammability concerns have been a big part of the debate in Europe. In the fall of 2008, the German Environmental Aid Association recorded a car crash and staged tests, purporting to prove that HFO-1234yf is both flammable and lethal. The Alliance for CO2 Solutions posted the tests on YouTube, and they were the subject of news programs in Germany.

At the time, fluorochemical makers countered that HFO-1234yf was no more hazardous than HFC-134a. Still, EPA’s own fact sheet on the proposed rule to approve HFO-1234yf in cars points out, “If auto manufacturers choose to adopt this refrigerant, they would be required to mitigate risks of fire associated with this refrigerant in the event of an accidental release during servicing or vehicle operation.” Automakers have long experience handling fluids such as gasoline and oil that are more flammable than HFO-1234yf, points out Diane Picho, DuPont’s global refrigerants manager.

Both Picho and Honeywell’s Morris say their firms are working on HFO variants and blends for stationary refrigeration and appliance insulating foams. Honeywell already has EU approval for HFO-1234ze as an insulating foam blowing agent. And if HFO-1234yf is successful in cars, which account for less than 20% of the global fluorocarbons market, it could be the vanguard of a range of low-GWP fluorochemicals.

“We have high aspirations for the HFO category,” DuPont’s Vanlancker says.

Business
German Automakers To Use Air-Conditioners Based On Carbon Dioxide
Business
Disputed Refrigerant Passes Muster, So Far
Business
Dispute Over New Fluorine-Based Refrigerant Heats Up Again
Share X
To send an e-mail to multiple recipients, separate e-mail addresses with a comma, semicolon, or both.
Title: Automakers Go HFO
Author: Marc S. Reisch
Chemical & Engineering News will not share your email address with any other person or company.