Spending edged up 1.7% for chemistry but grew 4.8% for science and engineering as a whole in 2008 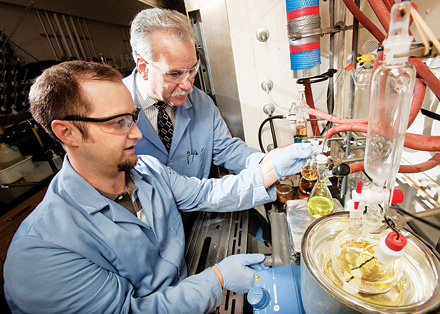 Research and development in academia profited from a healthy expansion in investment during fiscal 2008, the most recent year for which data are available from the National Science Foundation. In fact, 2008 marked the first year since 2002 in which spending on science and engineering R&D grew at a faster rate than the prior year. As a result of the economic stimulus package enacted by Congress in February 2009 to lessen the impact of the recession—which started in December 2007 and ended in mid-2009, according to many observers—the sector might fare even better in subsequent years. 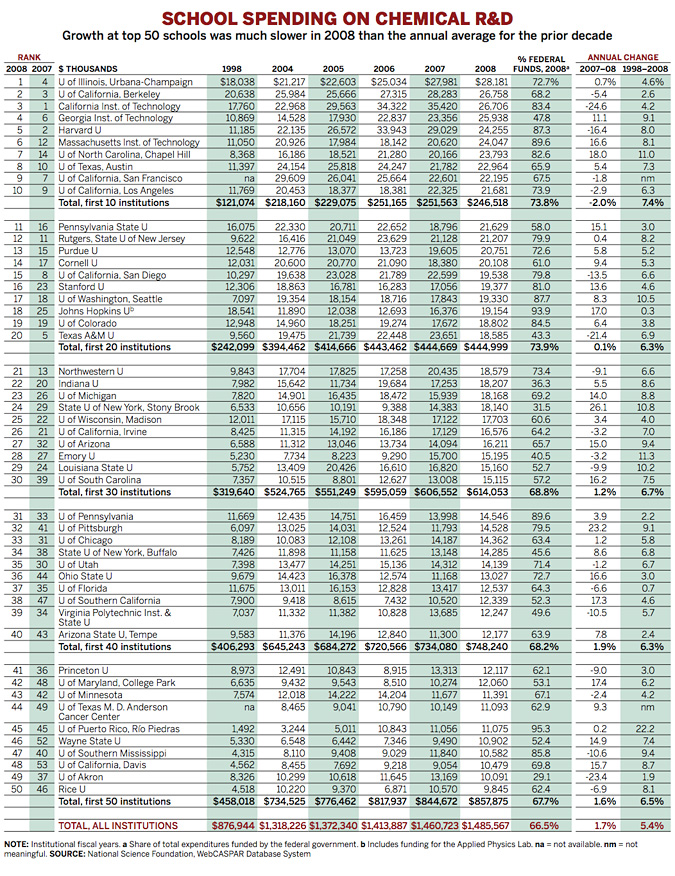 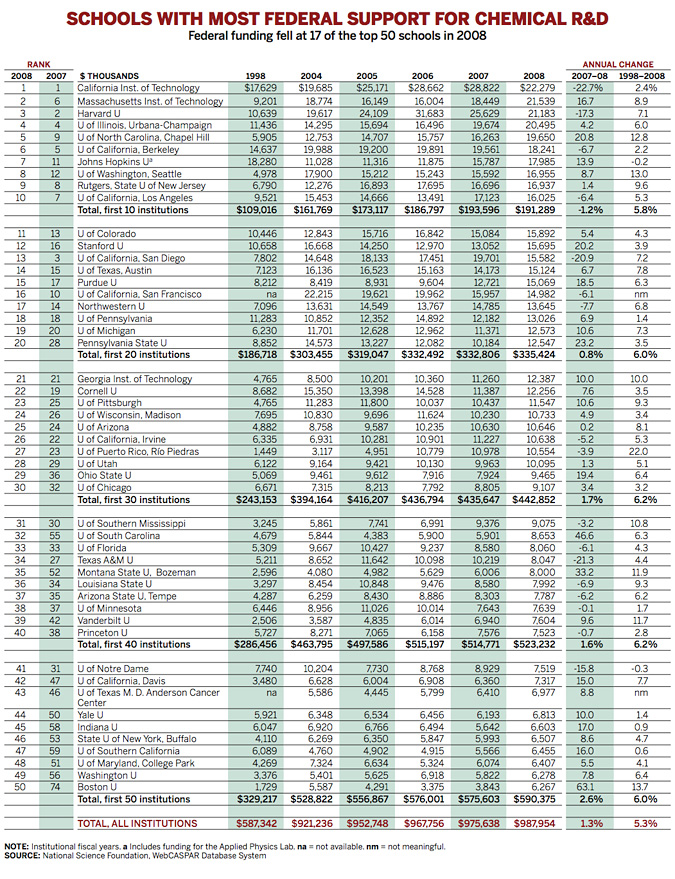 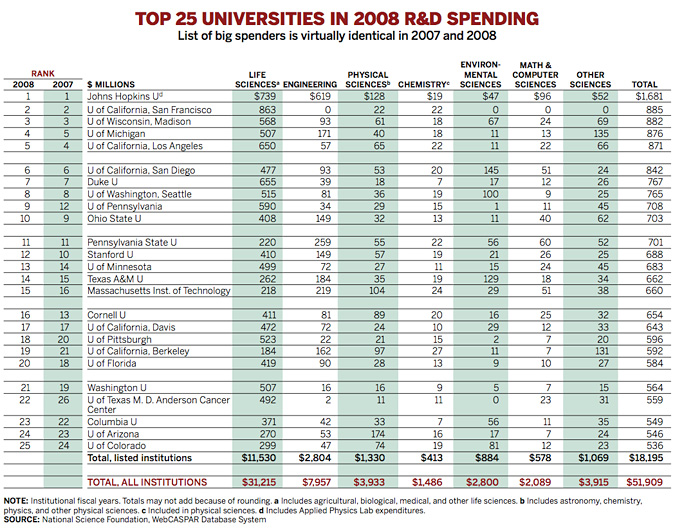 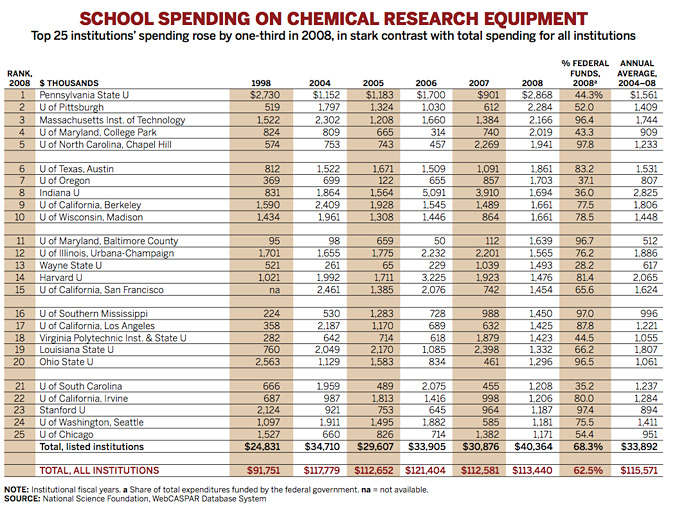 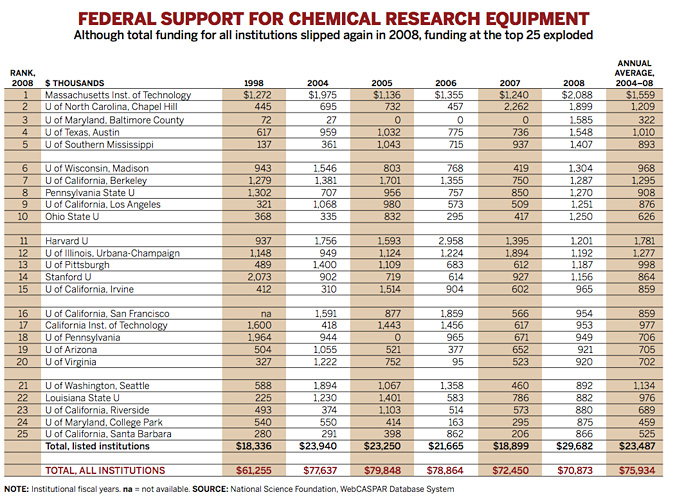 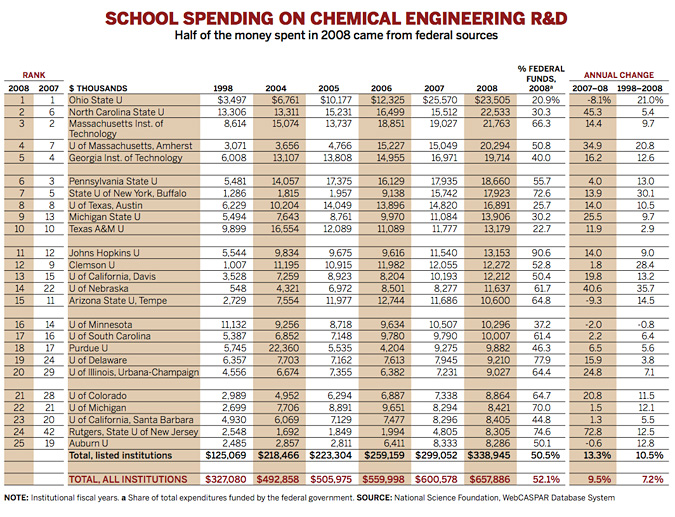 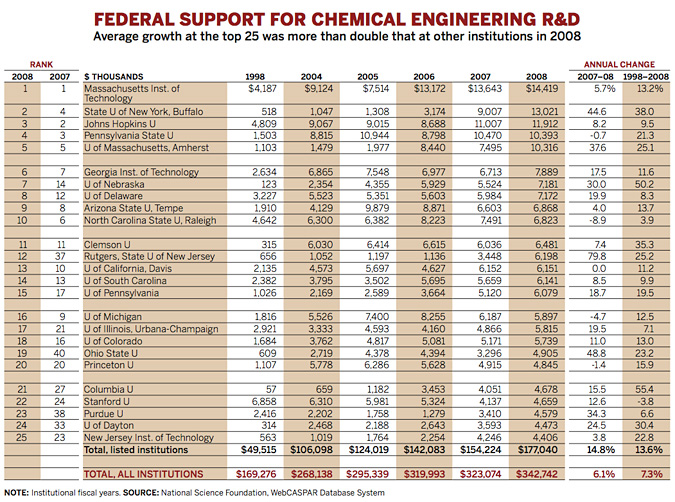 Removing the effect of inflation reveals that R&D spending rose just 2.4% in terms of constant dollars between 2007 and 2008. Over the decade ending in 2008, spending grew a total of 58.5% in constant dollars and 100.7% in current dollars.

As is typical, three-fourths of R&D spending in 2008 was funneled into basic research. The sector saw a 4.1% rise in current dollars to $39.4 billion, quite a bit smaller than the average annual increase of 7.5% between 1998 and 2008. The situation for applied R&D was considerably better, with growth of 6.7% to $12.5 billion in 2008 besting the 6.3% annual average growth of the prior decade.

Much of academia’s R&D budget is provided by the federal government. In 2008, the federal sector’s $31.2 billion investment—which represents an increase of 2.5% over the prior year—accounted for 60.2% of the total. Institutions provided an additional $10.4 billion, or 20.1% of academia’s total R&D budget; state and local governments kicked in 6.6%; and industry contributed 5.5%.

These shares remain fairly steady from year to year. The same holds true for the relative share of expenditures in each sector of science and engineering. Science accounted for 84.7% of total academic R&D spending in 2008. The sector benefited from a 4.6% increase to $44.0 billion in outlays. The life sciences continued to dominate science spending, absorbing 60.1% of the total R&D budget as a result of a 4.6% increase to $31.2 billion.

The physical sciences, including chemistry, physics, and astronomy, didn’t fare as well. Spending rose a mere 1.9% to $3.9 billion in 2008, for a 7.6% share of the total. Investment in chemistry edged up 1.7% to $1.5 billion, far short of the 5.4% average annual increase over the previous decade. This slight increase preserved the central science’s share at 2.9% of the total R&D budget.

Materials engineers actually lost ground in terms of federally financed spending in 2008, with a cut of 1.1% to $374 million compared with 2007. Federal support for chemical engineering, on the other hand, jumped 6.2% to $343 million. And federal investment in engineering as a whole grew 5.4% to $4.7 billion.

Federal support for science R&D in academia rose just 2.0% in 2008 to reach $26.5 billion. Within the science sector, federally backed spending on the life sciences grew 1.7% to $18.7 billion. Chemistry spending reached $988 million following growth of just 1.2%. That increase was less than one-fourth the annual average for the prior decade.

The school that spent the most on chemical R&D in 2008 was the University of Illinois, Urbana-Champaign. UIUC had placed fourth in 2007, but its 0.7% increase to $28.2 million was sufficient to boost it into first place the following year. The University of California, Berkeley, edged up from third place to second despite a 5.4% decline in spending to $26.8 million. At the same time, a 24.6% plunge to $26.7 million sent California Institute of Technology to third place—after having held first place for each of the preceding three years.

Georgia Institute of Technology climbed two spots to fourth place as a result of an 11.1% increase to $25.9 million in chemical R&D spending, and Harvard University’s 16.4% slump to $24.3 million shifted it from second to fifth place. Rounding out the list of the 10 biggest spenders are Massachusetts Institute of Technology; the University of North Carolina, Chapel Hill; the University of Texas, Austin; UC San Francisco; and UC Los Angeles. MIT and UNC Chapel Hill were the only newcomers to this top tier in 2008; they displaced UC San Diego and Texas A&M University.

For the second year in a row, Ohio State University took first place in terms of school spending on chemical engineering R&D, although its outlay shrank 8.1% to $23.5 million. That expenditure was enough to top North Carolina State University, which placed second despite a 45.3% surge to $22.5 million. MIT; the University of Massachusetts, Amherst; and Georgia Tech each spent nearly as much as NC State.

As in 2007, Caltech enjoyed the greatest amount of federal support for chemical R&D in 2008. Nevertheless, its $22.3 million allocation represented a decline of 22.7% over the prior year. MIT took second with a $21.5 million investment. The other top five schools were Harvard, UIUC, and UNC Chapel Hill.

MIT also made out well in terms of federal support for chemical engineering R&D. It retained first place with a 5.7% hike to $14.4 million in federal backing. The government was also generous to the State University of New York, Buffalo, where a 44.6% boost to $13.0 million continued a long run of dramatic annual increases. Johns Hopkins University, Pennsylvania State University, and UMass Amherst rounded out the ranks of the top five.

As a group, colleges and universities spent $113.4 million on chemical research equipment in 2008, up some 0.8% from the previous year. But the top 25 schools found themselves in a position to raise spending on equipment by 30.7% to $40.4 million.

Federal support for chemical research equipment declined for the third year in a row in 2008, slipping 2.2% to $70.9 million. However, the top 25 schools benefited from a 57.1% surge in support to $29.7 million. The largest federal grants went to MIT; UNC Chapel Hill; the University of Maryland, Baltimore County; UT Austin; and the University of Southern Mississippi.

The number of postdoctoral appointments for chemists held almost steady in 2008, slipping a mere 0.2% to 3,943. Chemical engineering postdocs had a much better year: Their ranks grew 11.4% to 880.

Data for this article were drawn primarily from NSF’s WebCASPAR database of academic science and engineering statistics, which can be accessed online at webcaspar.nsf.gov. Further information came from NSF’s annual “Academic R&D Expenditures” report, which can be viewed at nsf.gov/statistics/nsf10311.

Note that numbers from different tables might not match because of rounding.