Credit: Steve Ritter/C&EN
Warner (left) and Amy S. Cannon head a research and education enterprise that is out to change the way chemists operate.

In a technology park just north of Boston, a new model for sustainable chemical research and development is unfolding. Created in 2007, the Warner Babcock Institute for Green Chemistry (WBI), led by organic chemist John C. Warner, is working with industry partners to redefine how scientists solve the technical challenges of developing safer chemical products and greener production processes.

Warner had been frustrated with the limited intellectual freedom of working in a traditional industry research position and with the funding restrictions of the academic environment. Then he hit on the idea of creating an academic-style laboratory but financing it like a contract R&D business, with clients paying experts to help solve their problems. Enter James Babcock, a Harvard-trained corporate lawyer who spent much of his career leading a global investment firm. Babcock, who is the chairman of WBI’s board of directors, provided the seed funding and, with mechanical engineer and entrepreneur William Kunzweiler, helped Warner get started.

In three years, Warner and his research team have become go-to scientists when manufacturing companies have an application they would like to improve but not the chemical expertise to accomplish the task. The institute is creating patentable intellectual property at a rapid pace: WBI has filed for some 140 patents for itself and its clients, and five products it has helped develop are ready to enter the marketplace. WBI is also cash positive from the income it receives from contracts with its clients, Warner says, although he declines to divulge the firm’s annual operating budget. These achievements have come during the worst U.S. economy in decades.

“It’s a successful model,” Warner beams. “I don’t want to paint it as being easy,” he says about the revenue-generating R&D at WBI. “We put in a lot of long hours here. We have a lot of hard-working people.”

WBI scientists are currently developing toxicology screening technologies such as a material that mimics eye tissue to substitute for live-animal testing, a nontoxic aqueous solution for stripping photoresist from silicon wafers, a less energy-intensive process for making solar panels, and alternatives to the controversial chemical bisphenol A used in plastic bottles and cash-register receipt paper. Warner, who serves as WBI’s president and chief technology officer, notes that each of these projects has its roots in green chemistry. 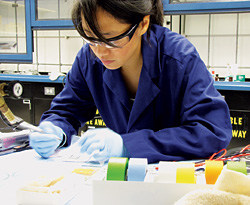 In their “molecular-level how-to guide,” Warner and Anastas established the 12 Principles of Green Chemistry, a framework of concepts such as using less hazardous reagents and solvents, simplifying reactions and making them more energy efficient, using renewable feedstocks, and designing products that can be easily recycled or that break down into innocuous substances in the environment.

“Green chemistry is the mechanics of doing sustainable chemistry,” Warner observes. “By focusing on green chemistry, it puts us in a different innovative space. It is a science that presents industries with an incredible opportunity for continuous growth and competitive advantage.”

Warner started his career in 1988 as a research chemist at Polaroid, working on colorless-to-color printing technologies. Yearning to make a bigger difference with green chemistry, he left his lucrative job in 1996 to take an academic position at the University of Massachusetts, Boston, where he established the first doctoral program in green chemistry. In 2004, Warner moved to UMass Lowell, where he founded the Center for Green Chemistry. But Warner still felt the pace of innovation—putting green chemistry into practice—was moving too slowly, prompting him to take a leap of faith and start WBI.

When WBI opened its doors three years ago, it had a staff of 10, Warner notes. Because of its financial success and ability to attract a steady stream of clients—even without advertising—the institute now has about 40 employees, including chemists, biologists, toxicologists, engineers, and physicists.

Green chemistry is the design of chemical products and processes that reduce or eliminate the use and generation of hazardous substances. These principles were first published in the 1998 book "Green Chemistry: Theory & Practice," by Paul T. Anastas and John C. Warner, as a means to make the concepts of green chemistry accessible to the scientific community.

A walk through WBI’s 42,000-sq-ft facility reveals standard lab benches, fume hoods, and analytical instrumentation, plus an array of specialized lab equipment and instruments for developing, analyzing, and testing films, coatings, and surfaces. Much of Warner’s chemistry, he explains, is based on the concept of “noncovalent derivatization,” which employs hydrogen bonding and π-stacking interactions of aromatic ring compounds.

“Normally, when chemists want to modify a molecule, they use reaction chemistry to change or add functional groups or perhaps form a polymer—changes that often involve multiple steps, hazardous reagents, and create waste,” Warner says. “Sometimes, there’s no need to create new molecules, but instead to intentionally combine an existing molecule with other substances in appropriate ratios and use the noncovalent interactions to obtain the desired effect.” The properties of materials can typically be controlled by pH, temperature, light, or humidity, he notes, and these materials typically have reduced toxicological and environmental impact.

“It’s chemistry controlled by entropy rather than by enthalpy,” Warner says.

One of WBI’s successes is significantly improving the oral availability of a promising Parkinson’s disease drug that was impractical to administer to patients. The drug is now in clinical trials.

“Because the dose can be much smaller, less drug has to be manufactured, and that significantly reduces chemical waste, which is very high in pharmaceutical production,” Warner explains. “But more important, with the lower dose, the body excretes less drug or drug metabolites into the environment. We accomplished this by looking at the morphology of the molecule and taking advantage of noncovalent interactions to control its solubility and release kinetics.”

WBI scientists have also created a green hair dye—not one that dyes hair green, but rather one that restores natural hair color while avoiding highly toxic chemicals. For example, Warner points to one popular commercial hair product for men that uses lead tetraacetate, which is toxic and has been banned in some countries.

“We really wanted to work on something to replace that product,” Warner says. “We looked at the structure of human hair pigment and came up with a greener technology to mimic it.”

Not only is Warner one of the inventors of the dye, which is still being tested, he is also a user. He volunteered to test the dye on his own graying hair, restoring the chestnut color and his youthful look from a decade ago.

“We are kind of working all over the place,” Warner notes. “My philosophy is that a molecule doesn’t know what kind of application it’s in—it could care less if it’s in a pharmaceutical, a cosmetic, or a coating material. We rely on our partners to know the application they want. We focus on developing the chemistry to make it happen. It’s a true collaboration.”

Essentially all of the research conducted at WBI goes unpublished. Warner says it’s not his goal to build up an endless publishing record. And the institute shuns public recognition from the companies it partners with, he adds. Warner doesn’t name names when it comes to the institute’s clients either. But they are recognizable, household names, he says.

Warner says he just wants to develop and promote green chemistry as a model way to do science. For that reason, he insists that contracts with clients include an “antiburial clause” to ensure that the intellectual property doesn’t collect dust on a shelf—if it does, the rights revert back to WBI so the invention can be put to use.

Aside from the science, the culture of the Warner Babcock Institute is driven home by the amenities of its research facilities: a full kitchen, workout room, yoga studio, game room, and a replica of Grandma Warner’s living room with a television and sofas. “Our goal is to provide our staff with an environment that enables scientific achievement through interactions of a diverse and multidisciplinary team,” Warner says. “We do everything we can to foster creativity and hard work with laid-back intensity.”

It’s a different approach. Given WBI’s success thus far, Warner and his team seem to have gotten it right.