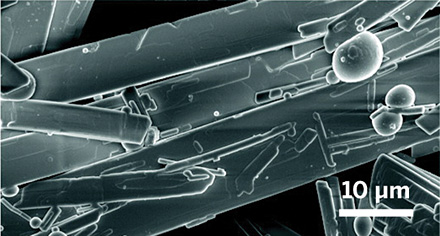 An international research team has devised a synthetic strategy that employs ultrasound to produce large, high-quality single crystals of mercury thiolate (HgSR2), where R = alkane (J. Am. Chem. Soc., DOI: 10.1021/ja1056449). Mercury thiolates not only have uses in organic electronics, but they are also an interesting chemical illustration of the strong attraction between mercury and sulfur-bearing thiols. Methods typically used to make mercury thiolates involve the reaction of mercury salts with thiolates or disulfides, and they are slow and produce small crystals. Now, Joanna Aizenberg of Harvard University, Boaz Pokroy of Technion—Israel Institute of Technology, and colleagues report combining liquid mercury and alkanethiols and exposing the mixture to medium-intensity ultrasound. Within five to 10 seconds, the sonication treatment leads to mercury thiolate crystals that are two orders of magnitude larger than crystals formed by other methods. The researchers posit that sonication is crucial because the energy transmitted to the solution can induce “shedding” of Hg(SH)2 layers and then facilitate the layers’ self-assembly into large crystallites. Indeed, the group was unable to produce the crystals by vigorously stirring the same mixture for more than three hours.