Electrochemical cells offer big payout, but production is years away 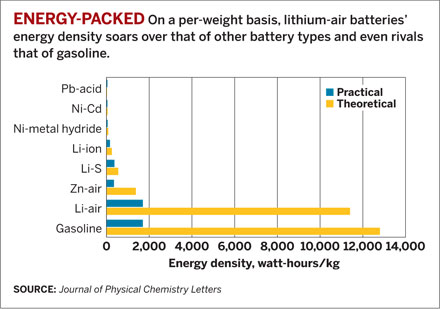 Technologies with great promise can remain potentialities until key scientific advances enable them to be put into actual use. Electrified motor vehicles may be a case in point.

“For the most part, the key factor limiting commercial development of electric vehicles is the battery,” says Philippe Stevens, a senior scientist at Paris-based Electricité de France. Electrically powered private transportation could provide meaningful answers to critical questions about limited supplies of fossil fuels and rising carbon emissions. But the technology is not yet ripe for widespread implementation. The main obstacle, Stevens explains, is the limited driving range provided by today’s batteries—typically less than 100 miles for small passenger cars.

A steady stream of battery advances has put large numbers of hybrid electric vehicles on city streets and highways. Additional advances are just starting to have a similar effect on so-called plug-in hybrids, hybrid automobiles that can be recharged at home. Despite the considerable media attention garnered by these cars, both types of hybrid vehicles strongly depend on petroleum-fueled internal combustion engines for distance driving.

To make the technological jump to fully electric vehicles, automakers will need a storage battery of practical size and weight that can provide enough energy in a single charge for a motorist to drive at least a few hundred miles. Achieving a driving range that extensive will require “a breakthrough in battery technology,” Stevens says. One of the main areas researchers are exploring for clues to that breakthrough is metal-air batteries, especially ones based on lithium.

Metal-air batteries get their name from reactants that provide energy by undergoing electrochemical reactions. In zinc-air cells, for example, energy is released by oxidizing zinc (which is held within the battery case) with oxygen from the air. Insofar as the oxidizer is not stored in the battery but supplied continuously from an external source—air—these kinds of batteries are similar to fuel cells, in which neither the oxidizer nor the fuel is packaged inside the cell.

“Lithium-air is a battery technology that’s extremely high risk, but one that’s also potentially extremely high gain,” asserts Hubert A. Gasteiger, a professor of electrochemistry at Technical University of Munich. The potential for high gain comes from lithium’s thermodynamic properties, which make the lightweight ­element an energy jackpot. 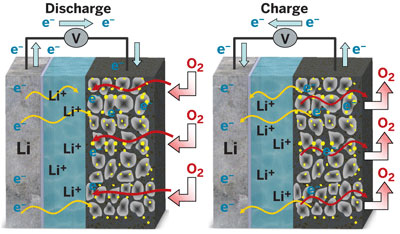 Winfried W. Wilcke makes the case for lithium’s favorable energetics by noting that oxidizing the pure metal releases nearly 11,700 watt-hours/kg. That value is quite close to the value for one of the most energy-dense common liquids—gasoline.

Wilcke, who is a program director at IBM’s Almaden Research Center, in San Jose, Calif., goes on to explain that because of engine inefficiencies and other real-world constraints, only a fraction of gasoline’s energy can be put to practical use in an ordinary automobile. The same is true for Li-air cells because of structural materials and other battery components that add weight but don’t provide energy.

It turns out that the practical energy density by weight for gasoline and Li-air cells, according to Wilcke, is only about 1,700 Wh/kg. But that value is still many times higher than that of nearly every other battery system, including today’s best Li-ion batteries, he says. That advantage, which could be as high as a 10-fold increase in energy density relative to Li-ion batteries, in principle should translate to a 10-fold enhancement in driving range with no increase in battery weight. But designing a practical Li-air electric-vehicle battery that can pack that much energy per weight “is a tremendously tough goal” that’s beset with technical challenges, Wilcke acknowledges.

To begin with, Li-air batteries suffer from “low round-trip efficiency,” says Yang Shao-Horn, a professor of mechanical engineering and materials science at Massachusetts Institute of Technology. That term indicates that the voltage required to charge the battery is higher than that obtained while discharging the battery. Efficiency values for Li-air batteries are typically 60–70%. “That means you lose a significant amount of energy each time you charge and discharge these batteries,” Shao-Horn points out.

Another problem is the sluggish discharge rate. During discharge, oxygen is reduced at the cathode as it reacts with lithium from the anode to form lithium oxides (Li2O and Li2O2). But that process proceeds too slowly for electric-vehicle propulsion. To get the needed energy, an electric vehicle would have to tow a trailer full of these batteries, Shao-Horn remarks.

Specially designed catalysts might help overcome these kinds of problems. Working with Gasteiger and Shao-Horn, Yi-Chun Lu and coworkers at MIT found that decorating a carbon cathode with platinum-gold particles measuring just a few nanometers in diameter led to a record-setting round-trip efficiency of roughly 77%. On the basis of control tests, the team proposes that the alloy nanoparticles serve as bifunctional catalysts. Gold sites enhance the oxygen reduction reaction that occurs during discharging, and platinum sites facilitate oxygen evolution during charging, they say (J. Am. Chem. Soc., DOI: 10.1021/ja1036572).

Short battery lifetimes and low numbers of charging cycles also stand in the way of Li-air battery development. Jeffrey W. Long, a chemist at the U.S. Naval Research Laboratory (NRL), in Washington, D.C., explains that a number of processes can clog the pores of the air electrode and thereby limit battery performance. Ideally, as the battery discharges, lithium oxides precipitate on the pore walls uniformly and reversibly, he says. But the process doesn’t always go smoothly. Depending on the structure and chemical nature of the cathode, the rate of discharge, and other factors, precipitate layers can obstruct some electrode regions and prevent them from further participating in the oxygen reduction reaction.

Recent work suggests that the electrode’s pore structure plays a role in that process, but the details are unclear, Long says. So a team of NRL researchers, which includes Long, Christopher N. Chervin, and Debra R. Rolison, is tackling the problem by investigating air cathodes based on carbon aerogels and nanofoams in which the size and distribution of three-dimensional interconnected pores can be varied systematically on a scale from nanometers to micrometers. 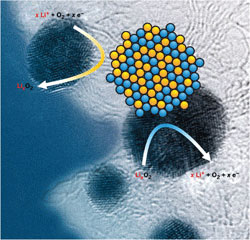 Most researchers working in this area simplify their experimental setups by supplying the cells with dry oxygen, which avoids real-world problems caused by moisture, CO2, and other air components. Recently, however, Ji-Guang (Jason) Zhang, Wu Xu, and coworkers at Pacific Northwest National Laboratory (PNNL) reported success in operating Li-air batteries in ambient air by using a heat-sealable polymer as an oxygen-diffusion membrane and a moisture barrier.

In that demonstration, which lasted longer than one month and was conducted under an oxygen partial pressure of 0.21 atm and 20% relative humidity, the PNNL team measured an energy density of 362 Wh/kg, on the basis of the total weight of the battery including packaging (J. Power Sources, DOI: 10.1016/j.jpowsour.2010.01.022).

The potential payoff for designing a long-lived rechargeable Li-air or other metal-air battery suitable for wide-scale electric vehicle usage is huge. A number of commercial research collaborations, such as that of Berkeley, Calif.-based PolyPlus and Corning, are actively working to make these types of batteries, but products aren’t expected anytime soon.

IBM research scientist Girish Gopalakrishnan, who together with Wilcke and IBM coworkers recently reviewed Li-air battery research (J. Phys. Chem. Lett., DOI: 10.1021/jz1005384), points out that automotive propulsion batteries are just now beginning the transition from nickel metal hydride to Li-ion batteries after nearly 35 years of Li-ion research and development. Expressing a conservative but realistic view shared by many battery experts, he says the transition to Li-air batteries is likely to follow a similar development cycle.